Twitter
« Metropolitan Division: What Has Changed?
Can The Stars Keep Tyler Seguin? » 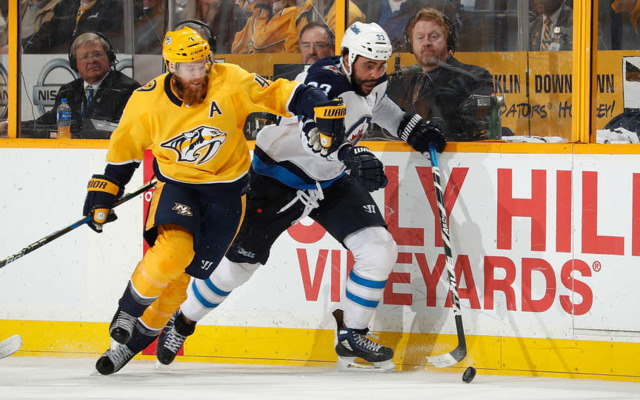 In their recent years, the Nashville Predators have been known for their fast play and their solid defense. They have the latter shored up very well now, as they committed to defenseman Ryan Ellis to the tune of $50 million. The deal will begin during the 2019-2020 season, and last for 8 years, meaning he is signed through the 2026-27 season. This deal means that three-quarters of their defensive core is signed through the 2021-22 season. These three players are Ellis, P.K. Subban, and Mattias Ekholm. Roman Josi is also signed through 2019-20. That means for at least two more seasons, they will be shored up defensively with top level talent.

Nashville General Manager David Poile released a statement regarding the signing on Tuesday:

”Ryan is a huge part of our team on and off the ice and we are happy to have his leadership remain in our locker room for the foreseeable future. We have talked about wanting to keep the core of our team together, and this is another opportunity to help us do so while continuing to compete for a Stanley Cup. Ryan is entering his prime and is one of the reasons why we feel this team has a chance to win every time we step on the ice.”

Ellis was +26 this past season. Despite only appearing in 44 games, he put up 23 assists, a career high. This would make that season a career year, as he topped his previous production while appearing in a little more than half the games. The Predators certainly took notice, as they signed him with a whole year left on his current deal. They didn’t want even a chance of a different team making Ellis an offer.

The Predators drafted Ellis 11th overall in the 2009 NHL entry draft. Before that, he played in the OHL for the Windsor Spitfires. He began his American career with the AHL’s Milwaukee Admirals. He joined them in time for the 2010-11 playoffs, appearing in 7 games, recording 2 points. He played 29 games for the Spitfires during the 2011-12 season, before being promoted to Nashville. He put up 11 points during his 32 appearances. He was sent back down to begin the 2012-13 season, but was brought back up again for the second 32 games of the season. He put up 6 more points that year. Ellis finally began a season in Nashville when he laced up to start the 2013-14 season. During his 80 games, he scored 27 points. He set his career high for points during the 2016-17 season, scoring 38 despite playing in only 71 games. Had he appeared in 80 or more games this past season, it could be reasonably assumed that if he kept up the type of play he showed, he could have put up 60+ points.

With their defense shored up for a few years, it will be interesting to see what type of pairings Nashville tries this coming year to try to put themselves over the top and finally bring the Stanley Cup home to Tennessee.

Join us on Telegram to get even more free tips!
« Metropolitan Division: What Has Changed?
Can The Stars Keep Tyler Seguin? »
SportingPedia covers the latest news and predictions in the sports industry. Here you can also find extensive guides for betting on Soccer, NFL, NBA, NHL, Tennis, Horses as well as reviews of the most trusted betting sites.
NHL Betting Tips, Predictions and Odds 800