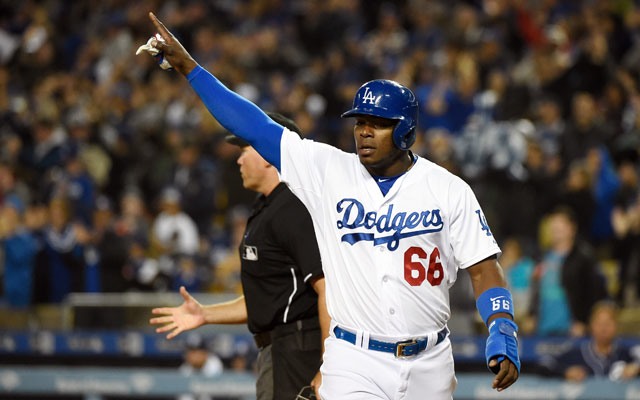 Major League Baseball has issued suspensions to two players who were involved in altercations earlier in the week. Los Angeles Dodgers outfielder, Yaisel Puig, and Miami Marlins pitcher Jose Urena will be missing some games starting this weekend. Major League Baseball announced shorter suspensions and small fines to other players and coaches involved in these incidents.

Yaisel Puig received a two-game suspension and was fined an undisclosed amount for his actions in a game against the San Francisco Giants on Tuesday night. The suspension is expected to begin on Friday night, unless Puig submits an appeal to delay the suspension. The Dodgers begin a three-game series with the Seattle Mariners on Friday.

The incident began when Puig swatted his bat in frustration after fouling off a pitch from Giants pitcher Tony Watson. When Puig stepped back into the batter’s box, Giants catcher Nick Hundley said something to him while he was still in his crouch. Puig immediately walked toward Hundley and the two got face to face and exchanged words. The Dodgers outfielder then shoved Hundley twice leading to both benches and bullpens emptying onto the field.

The two players were separated by teammates and coaches, but Puig was able to break free and make a charge at Hundley. Puig was able to get around his own manager to smack Hundley’s mask with an open hand to earn the suspension. Hundley was also fined an undisclosed amount for his role in the incident.

Meanwhile, Marlins starting pitcher Jose Urena has been suspended for six games by Major League Baseball. Urena hit Atlanta Braves rookie Ronald Acuna Jr. with the first pitch he threw in a game on Wednesday night. The pitch led to two separate benches-clearing scuffles, and Acuna was left with an injured left elbow.

Acuna had homered in five straight games for the Braves and led off the game with a home run in three straight. Urena appeared determined to end both streaks on Wednesday night. Urena’s suspension will begin on Friday night, unless he decides to appeal MLB’s decision.

Urena and Braves manager Brian Snitker were immediately ejected from the game following the incident on Wednesday night. Snitker led the charge out of the Braves dugout and had some words with the Marlins young pitcher. Several Braves teammates came to the defense of their young star after the game. All-Star Freddie Freeman called Urena’s pitch “gutless.”

Initial tests were negative, and Acuna was able to rejoin the Atlanta Braves on Thursday night against the Colorado Rockies. The pitch was clocked at 97.5 miles per hour, which was the fastest first pitch of the game thrown by Urena. Urena has had a forgettable 2018 season, and is just 3-12 with a 4.74 earned run average through 24 starts.

Eric Young, the first-base coach of the Atlanta Braves, was suspended for one game and fined an undisclosed amount for his role in the incident. The Braves continue to lead the National League East entering play on Friday night.

Join us on Telegram to get even more free tips!
« Benches Clear In Atlanta
MLB Players Land on DL »
SportingPedia covers the latest news and predictions in the sports industry. Here you can also find extensive guides for betting on Soccer, NFL, NBA, NHL, Tennis, Horses as well as reviews of the most trusted betting sites.
MLB Betting Tips, Predictions and Odds 241