Twitter
« Surprise Roster Moves the Story of the Day
Roster Roundup: Veterans on the Move » 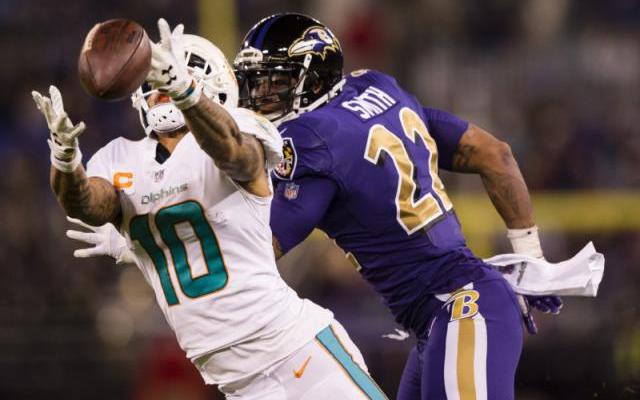 The NFL personal conduct policy has been responsible for many player suspensions since its inception. One more player this week has violated the policy leading to a suspension. Ravens defensive back Jimmy Smith has been suspended for the first four games of the 2018 season. Also, currently unemployed offensive lineman Richie Incognito was arrested on Monday making him subject to the personal conduct policy if he plays in 2018, however; however the nature of the charges makes that increasingly unlikely. Smith joins a list that includes Dante Fowler Jr., Reuben Foster, Jameis Winston, and Nigel Bradham who will miss time in 2018 for violating the personal conduct policy.

Smith’s suspension had previously been a six game ban, but that was lowered to just four games after he met with representatives of the NFL. The NFL became aware of allegations against Smith due to his ongoing child custody case against the mother of his children. Under the personal conduct policy, Smith and the Ravens both had a duty to report the allegations to the league, no matter how much merit the allegations had. Upon the conclusion of their own investigation, the NFL decided that at least some of the allegations against Smith, including domestic violence and drug use, had some truth to them.

For his part, Smith released the following statement: “I would like to sincerely apologize to my former girlfriend, the NFL, the Ravens organization, my coaches, my teammates, my fiancée and all our fans. I’m very disappointed that my past actions have led to this suspension. I promise that I have already learned much and will continue to learn more from this experience. I believe I am, and will continue to try to be, a better person and a better father because of this. I am committed to being the best I can be, both on and off the field. I take full responsibility for my past conduct. Moving forward, I will work with the NFL and the Ravens to ensure that what happened in the past will never happen again. I will take all necessary steps to be a positive role model for both my sons, for the NFL and for the entire Ravens community.”

The Ravens desperately need Smith back on the field anchoring their secondary. Baltimore released a statement stating that they were going to welcome Smith back upon the conclusion of his suspension, but also that he is aware of the consequences if his behavior does not change. One must believe that the Ravens will have a short leash with any player accused of domestic violence after the Ray Rice scandal of years past.

Despite his increasing age, Smith has continued to be a top corner in the league. Last year prior to his injury, Pro Football Focus graded him out as the twelfth best corner in the league. Smith then suffered a torn Achilles tendon that shortened his season. It will be almost a full year in between Smith taking meaningful snaps on the football field.

Incognito was arrested on Monday for making threats at a funeral home while making arrangements for his father’s funeral. Police later found ammunition and five guns in his automobile. Incognito was placed in a mental hospital earlier this year after Incognito created a disturbance at a local gym. The offensive lineman is currently unsigned.

Join us on Telegram to get even more free tips!
« Surprise Roster Moves the Story of the Day
Roster Roundup: Veterans on the Move »
SportingPedia covers the latest news and predictions in the sports industry. Here you can also find extensive guides for betting on Soccer, NFL, NBA, NHL, Tennis, Horses as well as reviews of the most trusted betting sites.
NFL Betting Tips, Predictions and Odds 332