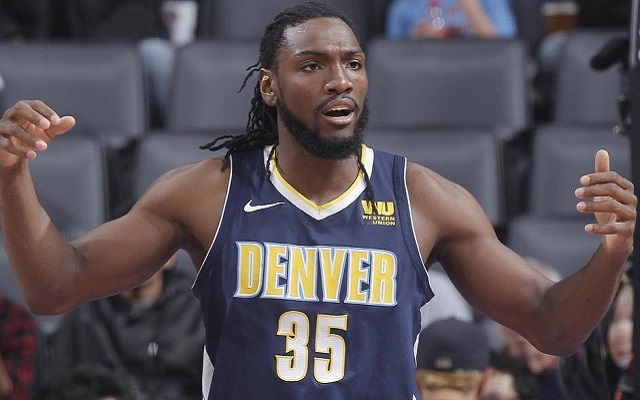 Although he flew under the radar last year, Kenneth Faried has a lot of potential for a big season, Forgotten by the Nuggets and benched for 50 of 82 games, he was traded to the Nets this offseason. A high-motor player, he has a chance to be a big part of their second unit and extend his career.

Drafted 22nd overall by the Nuggets out of Morehead State in 2011, the sky was the limit for Faried. He was a player who was a terrific rebounder and somebody who could finish inside. Though he has averaged just 25 minutes per game through his career, he has averaged three offensive rebounds per game, and 8.2 boards overall. He averaged a career-best 13.7 points per game during the 2013-14 season, where he played in 80 of the team’s 82 games.

He has never been a guy who you will see standout in the stat sheet, but somebody who will give you maximum effort. Like Reggie Evans used to grab every rebound in sight, Faried can do the same, and finish inside the paint. When the Nuggets signed Paul Millsap, they made sure that Faried would not start any more games there. As a power forward, he was less useful in a league where teams try to spread the floor as much as possible. Faried has no outside game.

He will have a very important role in Brooklyn, which should suit his game nicely. He is expected to back up Jarrett Allen, and he should see somewhere in the ballpark of 17-20 minutes per game. His energy will be very important to try and get the second unit going, while he can also serve as a mentor for Allen. He can help teach him to be a better rebounder as well as a more efficient player. This is something he will likely take in stride, just grateful to have a definitive role again.

Interestingly enough, Faried fell out of favor early in the season, losing his minutes to Trey Lyles, who played very well. They played small with Wilson Chandler at the power forward spot frequently while Millsap was hurt, and had Lyles backing him up. Evan Juancho Hernangomez got minutes ahead of Faried, due to the simple fact that he could shoot from the outside.

Faried rose to ‘fame’ when he had a few big performances for Morehead State in the 2011 NCAA tournament. From there, we just waited to see where he would be drafted. It is not a school that produces many NBA players, which tells you just how special the Manimal is.

Some stat projections for Faried in the 2018-19 season:

The bounce back is coming, and Faried is out to show the world that he should still be paid the big bucks. In a contract year, his performance is vital to his future.

Join us on Telegram to get even more free tips!
« OJ Mayo Looking to Possibly Extend his Career in NBA
NBA: Latest transactions around the League »
SportingPedia covers the latest news and predictions in the sports industry. Here you can also find extensive guides for betting on Soccer, NFL, NBA, NHL, Tennis, Horses as well as reviews of the most trusted betting sites.
NBA Betting Tips, Predictions and Odds 1371