Jimmy Butler Possibly Next NBA Star on the Move 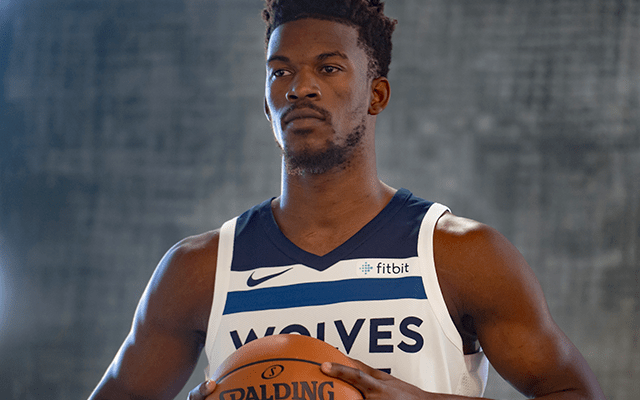 One of the most highly touted players in the game, Jimmy Butler may not be long for Minnesota. New York is a possible destination for him next year, and how, the latest rumors suggest, that he has potential interest in teaming up with LeBron in LA. He is a player not to be messed with, and he’s been red hot the last few years. Read below about what him going to LA may mean.

After hardly playing during his rookie season, Butler started to see the floor in year two. He appeared in all 82 games, averaging nine points and four rebounds per game. He upped his total to 13.1 points per game in his third year and then skyrocketed up to 20 points per game in his fourth season. He has averaged between 22-24 points per game while proving to be an elite defender and knockdown shooter.

Butler has had a number of accolades in the past four years, three of which have been in Chicago, and one in Minnesota. He is a 4X All-Star, a 4X All-Defense selection, and has also been 2X All-NBA. He has averaged five or more assists over the past few years, something new in his game. He has become a go-to guy in crunch time situations and averaged a career-best two steals per game last year.

What would Butler going to LA mean? Pairing him with LeBron James would be as dynamic a pairing as LeBron could have. He’s a two-guard who can lock-down his opponent, ignite the fast break at a high rate, and he can bury the three ball. He is a very streaky shooter who can be absolutely lights out on any given night. He is a very intense player, but one who does nothing but help his team win. The trade from Chicago, which was completely unexpected, happened because of a rebuild.

The cost of getting Butler was a little high for Minnesota, as they traded Kris Dunn, Zach LaVine, and the #7 pick in the draft, which turned into Lauri Markkanen. All of those players performed admirably last year, making the trade almost more of a win for the Bulls. Nevertheless, Butler has changed the culture in Minnesota to be slightly more intense, but he’s a proven winner, in both the regular season and the playoffs.

It is hard to name ten players who are better than Butler in this league, and if LA ended up getting him, he’d be even better than Paul George would have been. He can play shooting guard or small forward and would be a perfect guy to put next to LeBron. What they have going right now is nice, but adding JB would really be a game changer. Just imagine the two of them both wearing LA jerseys and being on the court together.

Though this is a season away, watch out. Butler to LA is something that could put the Lakers over the top.

Join us on Telegram to get even more free tips!
« Dwight Howard Looks to Remain Secret Weapon in Washington
Amare Stoudemire Seeking Return to the NBA after Big 3 Stint »
SportingPedia covers the latest news and predictions in the sports industry. Here you can also find extensive guides for betting on Soccer, NFL, NBA, NHL, Tennis, Horses as well as reviews of the most trusted betting sites.
NBA Betting Tips, Predictions and Odds 1371