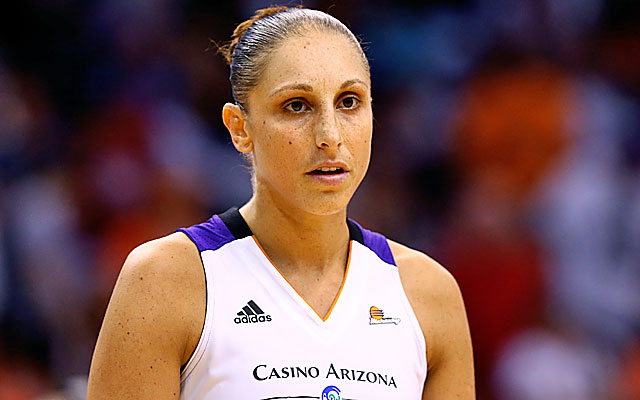 While the action on the court in the NBA is a couple weeks away, many NBA fans turned their attention to the ladies game on Tuesday night. Here is how it went down:

I usually get to bed by 11:30, but last night, watching the first half of the Storm vs. Mercury, I was tempted to stay up for the whole game. This is despite the fact that the second quarter completely favored the Storm, who were up by 12 at the break. They stretched the lead to 16 going into the fourth.

Then, leading by 19 with six minutes left, it seemed for sure that they were on their way to a cozy win. NOPE. The Mercury started chipping away, getting stop after stop, and finishing all of their lay-ups inside. Brittany Griner was not missing, and Diana Taurasi was setting up her teammates well. The team, 0-14 on threes in the first 38 minutes of the game, got a few major ones from Taurasi, including a tying-one over a pair of defenders with just three seconds left. A 19-point deficit, to forcing overtime. Playoff basketball at its finest.

The Mercury got off to a strong start in the overtime, but lost Griner, who fouled out with about three minutes to go, diminishing the advantage which they had in the post. On the other end, Sue Bird continually found her way into the lane, and the Storm made all of their free throws when it really counted. The Storm ended up winning the game 91-87, overcoming their blown 19-point lead late, and pulling to within a single game of the WNBA Finals.

There are a few lessons to be learned from this game. The first being that as a spectator, there is no reason to tune out of a game until there are 0 seconds left on the clock. Leads are created to be blown, and that is exactly what happened. The next is that you should never count the best players out.

Diana Taurasi, struggling all night, took the game over in the waning moments, with her big-time threes, and getting into the lane with absolute ease. Lastly, is to fight until the end. The Storm could have just given in and allowed the series to be tied after blowing their large lead, but they fought hard in overtime to earn the victory.

This game featured this year’s league MVP Breanna Stewart (27 pts, 4 rbs) and debatably the best player in league history Diana Taurasi (28 pts, 6 rbs, 8 asts) dueling on the biggest stage. This is a game I could not have imagined sleeping through. The decision to stay awake was an absolute winning one.

The Mercury are extremely lucky that they made it to the best of 5 round, as the first two series they played involved them having to win in single-elimination twice. If they treat the rest of this series as such, well, if they lose they’re out, then they have a chance to do it.

Watch out for the Mercury, who will without a doubt come out strong in game 3, and not wait for the end again.

Join us on Telegram to get even more free tips!
« Magic make Nikola Vucevic available
Two long »
SportingPedia covers the latest news and predictions in the sports industry. Here you can also find extensive guides for betting on Soccer, NFL, NBA, NHL, Tennis, Horses as well as reviews of the most trusted betting sites.
NBA Betting Tips, Predictions and Odds 1369