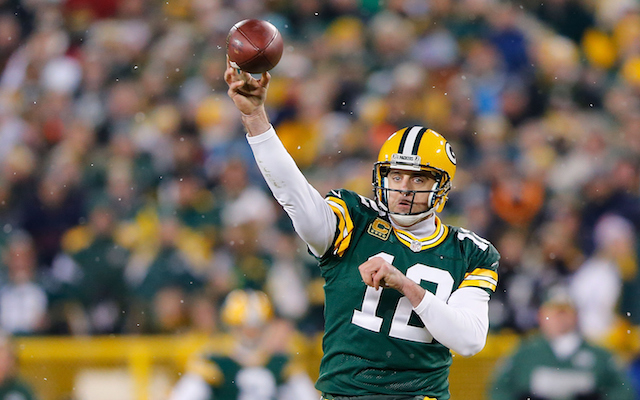 The theme for this off-season should be “record-setting deals.” Odell Beckham Jr. just got one. Kirk Cousins, yep. Aaron Donald wants one. Will Khalil Mack want to one-up Donald? Alex Mack, give him one. On Wednesday, Aaron Rodgers reached a deal with the Green Bay Packers on a four year, $134M extension.

The contract could be valued at near $180M if all the proper incentives and performance clauses are reached. The deal will run out in 2023 after the best quarterback in the league reaches the age of 40. Furthermore, the deal contains $103M in guaranteed money and an annual average value of $33.5M.

The language and distribution of the salary appeared to be very important to Rodgers, according to ESPN.com. Rodgers wanted money and he wanted quite a bit of it right away. The Green Bay quarterback will receive over $67M before the end of the 2018 season.

Critics will be quick to slam this deal as overpaying for an aging quarterback, but one cannot criticize Rodgers for knowing his value and the Packers for knowing the value of the position. The “star quarterback” salary has skyrocketed over a short period of time as Matt Ryan, Jimmy Garropolo and Kirk Cousins all received deals with annual average values over $27M. You will be hard pressed to find anyone that believes that Rodgers is less valuable than any of those three, despite his age.

Also, Odell Beckham Jr. just received a deal with an annual average value over $20M, so if there is a position and an individual that can justify a $33M annual value, it is Aaron Rodgers.

Rodgers was selected by the Green Bay Packers in the first round of the 2005 NFL Draft. After sitting behind Packer legend Brett Favre, Rodgers has been a mainstay behind center for Green Bay since 2008. In that time, Rodgers has won a Super Bowl, a Super Bowl MVP, twice won the NFL MVP, has been a six-time Pro Bowler, and was the 2011 Associated Press Athlete of the Year.

Rodgers missed most of 2017 with a broken collarbone, suffered during a Week 6 hit by Minnesota’s Anthony Barr. He returned in Week 15, but after losing to the Panthers and disqualifying the Packers from the playoffs, he was sent back on injured reserve. Life without Rodgers was not promising for the Packers. Brett Hundley filled in for the injured Rodgers but played poorly in reserve.

With Rodgers back at full strength, the Packers are again a top NFC contender. The Packers lost long-time Packer Jordy Nelson in the off-season, but Rodgers will still have plenty of talent to throw the ball to. DaVante Adams and Randall Cobb return on the outside to offer big-play threats, while the signing of tight end Jimmy Graham will provide a big target over the middle of the field and in the red zone. The Packers open the 2018 season against the Chicago Bears, a team that Rodgers has owned, at Lambeau Field on Sunday Night Football.

Join us on Telegram to get even more free tips!
« Teddy Heads South
Brent Celek expected to announce retirement Friday »
SportingPedia covers the latest news and predictions in the sports industry. Here you can also find extensive guides for betting on Soccer, NFL, NBA, NHL, Tennis, Horses as well as reviews of the most trusted betting sites.
NFL Betting Tips, Predictions and Odds 332