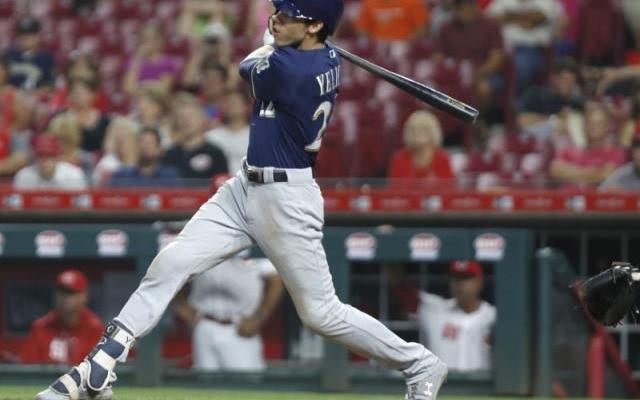 Milwaukee Brewers outfielder Christian Yelich went 6-6 on Wednesday night and capped off his stellar night by hitting for the cycle. It was the first time in his career that Yelich accomplished this feat. His tremendous night at the plate helped the Milwaukee Brewers edge the Cincinnati Reds 13-12 in a wild 10 inning affair.

Yelich joins Boston Red Sox star Mookie Betts as the only two players who have hit for the cycle this season. He also became just the third player to record six hits in one single game in 2018. The last time a player recorded six hits while hitting for the cycle was Ian Kinsler back in 2009 who was then a member of the Texas Rangers.

Although the game went into 10 innings, Yelich was able to accomplish the feat before the end of the 7th inning. He recorded a single in the first inning, and also reached safely on an infield single in the top of the third. In the fifth inning, Yelich blasted a two-run homer that gave the Brewers a brief lead in the ballgame. He then doubled in the 6th before finishing off the cycle with a game-tying RBI triple in the 7th inning. His 6th hit of the game came on another infield single in the top of the 9th inning. Yelich is now has a .319 batting average, which leads the National League.

Yelich became just the eighth player in Brewers history to hit for the cycle, and the last to accomplish the feat since George Kottaras in 2011. Jean Segura was the last Brewers player to record six hits in a game when he did so in 2013.

The Brewers have never had a batting champion in their team’s history, but Yelich is ahead of Scooter Gennett’s .314 average entering play on Thursday. The Chicago Cubs’ Ben Zobrist is also close with a .312 batting average. Yelich, 26, has also hit seven home runs in the last 10 games to bring his season total to 26. His previous career high was 21 home runs which he achieved with the Miami Marlins.

Yelich is in his first season with the Milwaukee Brewers after joining the team via trade during the offseason. The Brewers sent four prospects to the Marlins in exchange for the steady outfielder. Yelich was named to the National League All-Star team in July and blasted an 8th inning solo homer in the Midsummer Classic. His .371 batting average and 15 home runs during the last 45 games have kept the Milwaukee Brewers in the hunt for a playoff berth.

The Brewers were able to win the game when Jesus Aguilar connected on a solo home run off of Reds closer Raisel Iglesias. It was the 30th home run of the season for Aguilar who was also a National League All-Star this season.

Join us on Telegram to get even more free tips!
« David Wright Promoted To Triple
Yankees Acquire Former MVP McCutchen for Stretch Run »
SportingPedia covers the latest news and predictions in the sports industry. Here you can also find extensive guides for betting on Soccer, NFL, NBA, NHL, Tennis, Horses as well as reviews of the most trusted betting sites.
MLB Betting Tips, Predictions and Odds 241