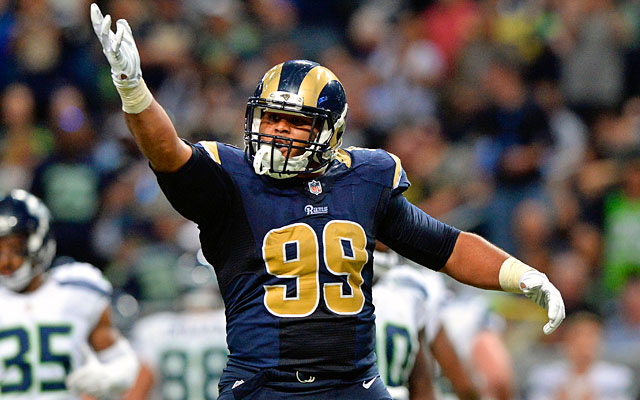 The Los Angeles Rams and DT Aaron Donald have agreed to a six-year, $135 million extension that keeps Donald in LA through 2024. Donald gets $87 million guaranteed and now sitting at $22.5 million per year in new money, Donald is now the league’s highest-paid defensive player.

After winning Defensive Player of the Year honors last season and making the All-Pro first team this is a good deal for both sides. Donald is a 4-time pro bowler since he joined the league back in 2014, three of which are first-team pro bowl selections. While recording 39 career sacks in such a young career thus far Donald has established himself as one of the top interior linemen in the NFL. The Rams also locked up running back Todd Gurley earlier this summer.

“I feel good right now,” Donald said Friday following the team’s practice. “Be back out here playing football again. That’s what it’s all about.”

Donald arrived 35 minutes early to the team’s training facility Friday morning to finalize the deal according to Rams general manager Les Snead. This new deal in place puts an end to Donald’s holdout that lasted throughout training camp. The team expects him to play in the season opener on Monday night, Sept. 10, against the Oakland Raiders.

Donald’s heart is in the right place as the tackle made it clear that his “ultimate goal” was to earn enough money to allow his parents to retire. Being able to call them and let them know that they no longer had to work was the “best feeling ever.”

Donald was the 13th overall pick back in the 2014 draft and has been regarded as perhaps the most disruptive defensive player in the NFL and now he is being rewarded. After earning $1.7 million in 2017 the defensive tackle will now earn $6.9 million this upcoming season before the extension kicks in.

“This has been a long time coming,” said Rams head coach Sean McVay. “This is a player that from a production standpoint really played unbelievably since he’s been here… He’s a pro’s pro.”

He notched nine sacks as a rookie, 11 in his second season and followed that up with eight in 2016. Donald is a defensive menace who has consistently generated pressure in opposing quarterbacks’ faces and either tallies the sack himself or will his speed, strength, and size can create rushing lanes for his teammates. The newly paid defensive tackle will now look to help the franchise bring home its first Super Bowl title since the Rams 1999 campaign.

Donald’s record-breaking contract could change the game and reinforce all elite players to hold out for a new contract. This is the most significant non-contract in NFL history and the end of this holdout gives us insight into that holdouts work if you’re a good enough player and honestly every player that sits at the top of their position should do it.

Elite players like Aaron Rodgers, Tom Brady, and every other top-10 quarterback could hold out every year because the quarterback position is known to be the most important. All eyes shift to Khalil Mack and his search for a new contract which we can expect to be pretty expensive.

Join us on Telegram to get even more free tips!
« Brent Celek expected to announce retirement Friday
NFL Week 1 Has Arrived: Look at the Opening Schedule »
SportingPedia covers the latest news and predictions in the sports industry. Here you can also find extensive guides for betting on Soccer, NFL, NBA, NHL, Tennis, Horses as well as reviews of the most trusted betting sites.
NFL Betting Tips, Predictions and Odds 332