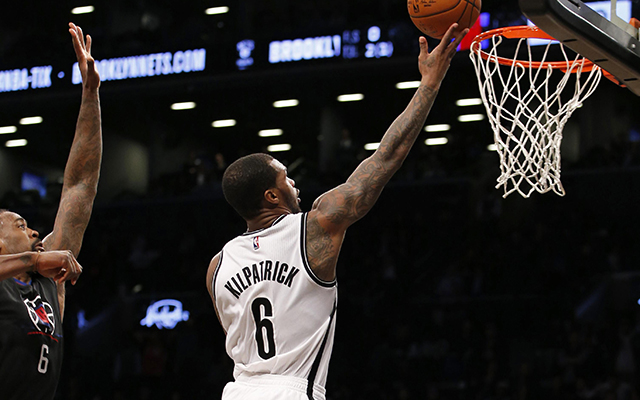 Sean Kilpatrick has been tearing up all levels of basketball for as long as we can remember. He was well-renowned as a New York basketball legend, and he would go on to Cincinnati and have a tremendous career there. The 6-4 guard looked for sure like he had NBA potential. He averaged 21 points per game during his senior year and shot the ball very well.

He would go undrafted and slide over to the D-League. The only reason he got to play in the NBA that first year, in four games for the TWolves, was that they had a game in New York, and he happened to be in the area. The same day they called him, he made his NBA debut.

After an uneventful stint in Denver the following year, he took his talents to Brooklyn with a few 10-day deals. He played well enough to earn a rest of the year deal. He averaged 14 points per game in 23 appearances. As a regular rotation player for them the following year, he averaged 13 points per game and even had a 40-point night. He was back in NY and TEARING it up! This is what makes last year so confusing. He played for Four teams!

For some reason, Brooklyn didn’t have him in their rotation last year and waived him pretty early in the year. He would sign right with the Bucks, where he played 23 games. WAIVED again. He then went to the Clippers, where he only played four games. WAIVED. He signed a multi-year deal with the Bulls late in the year and averaged 15.4 points per game on 44% shooting in nine appearances. He finally found a fit, with his fourth team of the year.

Then, on July 12, the Bulls opted to waive him. They said goodbye Sean go find a fifth team in two years. He’s been so unlucky. But, the question is, WHY DOES NOBODY BELIEVE IN HIM? We have seen on many occasions; Kilpatrick looks like a legitimate scorer. He has the NBA talent, and he has the ability to take games over. From the time he was in high school, he has been a gifted ballplayer, and it is really confusing why teams continue to move on from him.

There are without a doubt, teams out there who could use this man. He can light up the scoreboard, whether as a starter or reserve and fire a squad up. When you need a punch off the bench, here’s your man. The Bucks could have used his scoring ability in the postseason but opted for Shabazz Muhammad instead.

It would be hard to imagine Kilpatrick not being on an NBA roster at the start of next year. The OKC Thunder could use a guy like this on their bench, as could the Pistons, who lack a scoring punch on their bench. Come on NBA GM’s, give him another chance. You won’t regret it.

Join us on Telegram to get even more free tips!
« Suns and Rockets make a deal
Latest News and Notes Around the NBA »
SportingPedia covers the latest news and predictions in the sports industry. Here you can also find extensive guides for betting on Soccer, NFL, NBA, NHL, Tennis, Horses as well as reviews of the most trusted betting sites.
NBA Betting Tips, Predictions and Odds 1385