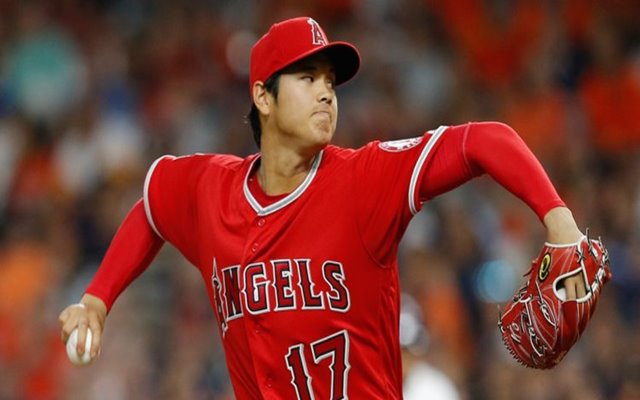 Los Angeles Angels two-way star Shohei Ohtani makes his return to the mound tonight in Houston. The Angels and Astros will wrap up their four-game weekend series in a game that will be featured on ESPN’s Sunday Night Baseball. The Angels have taken two of the first three games of this weekend series.

Ohtani hasn’t pitched for the Angels since June 6th after suffering pain in his right pitching elbow. Ohtani was diagnosed with a grade 2 sprain of the of the ulnar collateral ligament in the right elbow. The Angels initially thought that Ohtani would be lost for the season, but elected for rehab and rest instead of a season-ending surgery.

The rookie sensation has been rehabbing the elbow in hopes of returning to the mound this season. He threw a 50-pitch simulated game on Monday night in Los Angeles, prompting the Angels to announce him as Sunday night’s starter. The Angels will likely limit Ohtani to a similar number of pitches in this start.

On June 7 Ohtani received stem-cell and platelet-rich injections in an effort to help heal the strained elbow ligament. The Angels placed Ohtani on the 10-day disabled list with an injury and he missed a little over a month. He returned to the team as a designated hitter on July 3, and has performed well in that role since his return.

Ohtani was off to a terrific start in his Major League pitching career before suffering the injured elbow ligament. He made nine starts for the Angels and went 4-1 with a 3.10 earned run average in those starts. Ohtani was terrific at missing bats, and recorded 61 strikeouts in just 49 ⅓ innings pitched. He features a number of pitches, but his four-seam fastball was the most effective pitch before the injury.

The Angels will keep Ohtani on the one start a week schedule that he was on before landing on the disabled list. Before the injury, Ohtani was pitching every Sunday in an effort to give him sufficient rest between starts. Ohtani faced the Houston Astros in a start back in April and gave up four earned runs in just 5 ⅓ innings pitched.

The Angels landed Ohtani in the offseason after a long and intense bidding war. Ohtani chose to join the Angels over other contenders like the New York Yankees and Chicago Cubs. The Angels hoped that pairing Ohtani with MVP Mike Trout would give them a solid core to build towards the future. The Angels last made a playoff appearance in 2014.

Join us on Telegram to get even more free tips!
« Sale, Price Still Out For Red Sox
Acuna, Baez Set Records on Sunday »
SportingPedia covers the latest news and predictions in the sports industry. Here you can also find extensive guides for betting on Soccer, NFL, NBA, NHL, Tennis, Horses as well as reviews of the most trusted betting sites.
MLB Betting Tips, Predictions and Odds 241