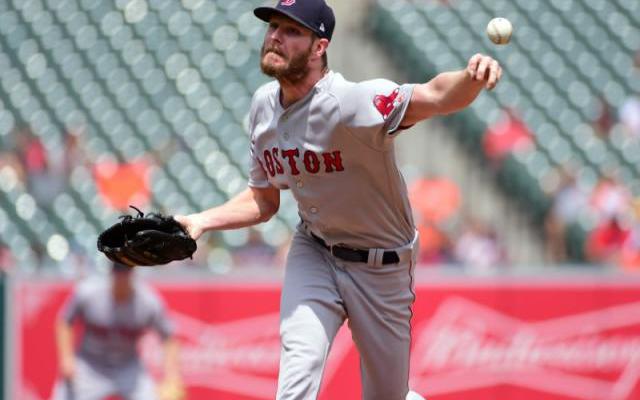 The Boston Red Sox remain without their two top pitchers as the team begin play in September. Both David Price and Chris Sale have missed time of late, and the Red Sox are unsure when the two pitchers will make their return to the mound. Boston leads the New York Yankees by 8.5 games in the American League East entering play on Saturday.

The Red Sox announced that left-hander David Price will miss his next scheduled start, but is unsure about how long he will be out. Price was scheduled to make a start against the Atlanta Braves this week, but his turn in the rotation will be skipped. Price is dealing with a sore pitching wrist after being struck by a line drive in a start against the Miami Marlins on Wednesday.

Price was forced to see a hand specialist on Thursday afternoon to get more tests done. Test results showed that there was no significant injury to the wrist and X-Rays were negative. Price has rejoined the team but has yet to throw since suffering the injury.

The Red Sox will not be forced to place Price on the disabled list as rosters were expanded on September 1. This is not the first time that Price has had to deal with hand issues this season. He was forced to leave a start in April after feelings sensations in his left hand. In May, Price was forced to miss a start after being diagnosed with carpal tunnel syndrome.

The return date of Chris Sale is more unclear for the Boston Red Sox. The 2018 American League All-Star Game starter hasn’t pitched since a game on August 12. Boston shut down their ace with left shoulder inflammation, but manager Alex Cora is hoping to give Sale a few starts before the playoffs begin.

Sale has increased his throwing routine as a way to kick-off his rehab, but still has yet to throw off of a mound. On Friday, Sale was long-tossing and was able to throw downhill for the first time since August 12. The next step in Sale’s rehab will likely be a live batting practice session. A Minor-League rehab assignment is unlikely as the Triple-A team wraps up its season this week.

The hard-throwing left-hander was likely headed to another American League Cy Young Award this season. Sale has made 23 starts this season, and sports a 1.97 earned run average. He is 12-4 and has recorded 219 strikeouts this season. Sale will likely be the game 1 starter in the playoffs if he is fully healthy.

Join us on Telegram to get even more free tips!
« Donaldson, Gonzalez Traded Before September Arrives
Ohtani Returns To Mound Sunday »
SportingPedia covers the latest news and predictions in the sports industry. Here you can also find extensive guides for betting on Soccer, NFL, NBA, NHL, Tennis, Horses as well as reviews of the most trusted betting sites.
MLB Betting Tips, Predictions and Odds 241