Joey Bosa ruled out for Week 1 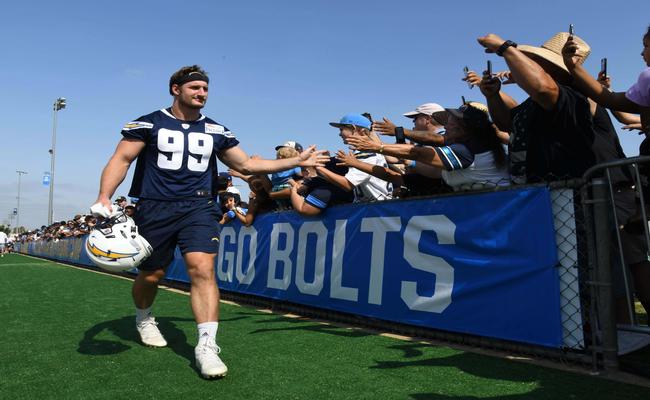 The Los Angeles Chargers will be without one of their best defenders Sunday against the Kansas City Chiefs. Bosa was spotted on Friday wearing a walking boot and is considered to be “week-to-week.” The Chargers will also be without cornerback Jason Verrett who they’ve already lost for the season due to an ACL injury that placed him on the IR. Even though Bosa’s current injury is technically separate from the injury he suffered during the preseason, it’s a little concerning that both happened to the same foot. 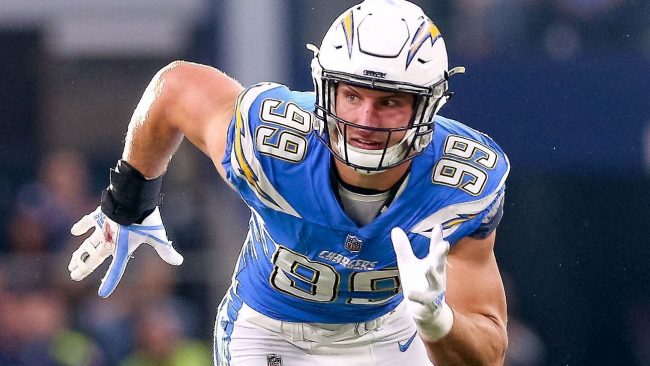 Huge Loss for the Chargers

This is a monumental loss for the Chargers defense week 1 against a very explosive Chiefs offensive unit. The team is going to need to find a way to put some pressure on second-year quarterback Patrick Mahomes who can do it both with his arm and with his legs. If Mahomes has enough time in the pocket then there should be plenty of big plays with the blazing speed of wide receiver Tyreek Hill, the pure-athleticism of tight end Travis Kelce, the addition of Sammy Watkins and Kareem Hunt carrying the ball out of the backfield.

Bosa was drafted by the Chargers with the No. 3 overall pick back in the 2016 draft. In the 16 games he played last season, Bosa earned his first invitation to the Pro Bowl after recording 12.5 sacks and 54 tackles.

“He’s very frustrated,” said Chargers head coach Anthony Lynn. “He’s been waiting for a while to get back on the field. He’s doing everything he can. He just wants to be out there with his teammates.”

On Thursday, the team reported that Bosa wasn’t able to practice at all. Friday brought the explanation for the pass-rushers downgraded status.

“That’s why we were being so cautious,” Lynn said. “We didn’t want anything else to happen. But it’s football. It’s unpredictable sometimes.” 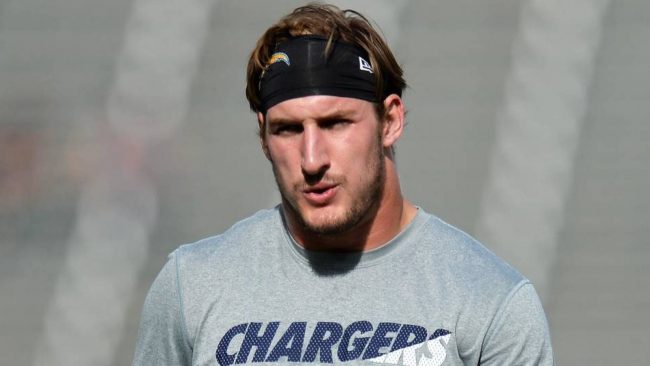 The Chargers will be forced to start second-year player Isaac Rochell, who was expected to see more playing time this season before Bosa’s injury. Now he’ll be forced into the starting lineup with rookie Uchenna Nwosu and defensive tackle Damion Square, among others, seen playing Bosa’s usual position during the preseason. Rochell was the starter for all four of the team’s preseason games, something he said helps boost his energy heading into Sunday’s matchup against Kansas City.

“It’s just kind of a title,” Rochell said after becoming a first-time starter. “It’s not necessarily this huge new thing. But it’s different. It is cool. But it’s like the same thing. I have to do what I have to do, and we all have to do our jobs.”

In Bosa’s 28 career NFL games, the former Ohio State Buckeye has 23 sacks and 147 tackles. Him and fellow defensive end Melvin Ingram provide the Chargers with one of the most dynamic pass rushes in the entire league.

His absence comes as the team prepares for a matchup against a Kansas City offense that ran for 363 rushing yards in sweeping both games they played in against the Chargers last season. The team has not beaten the Chiefs since 2013 as this is supposed to be the year that all changes. Some early predictions from experts have this team making it all the way to the Super Bowl, but with the injury bug already affecting the team they’ll need the offense to step up, as well as some unexpected performances on the defensive side of the ball.

“It’s definitely tough,” cornerback Casey Heyward said. “But … with Isaac emerging, we have the utmost confidence in him to go out there and do the things he’s supposed to do. … He’s been playing well in the preseason. Now it’s his time to do it in a real game.”

Join us on Telegram to get even more free tips!
« Falcons lose Keanu Neal for the season
David Johnson signs contract extension with Cardinals »
SportingPedia covers the latest news and predictions in the sports industry. Here you can also find extensive guides for betting on Soccer, NFL, NBA, NHL, Tennis, Horses as well as reviews of the most trusted betting sites.
NFL Betting Tips, Predictions and Odds 332