Twitter
« Auston Matthews: The Forgotten NHL SuperStar
Vegas Struggling Out of the Gate » 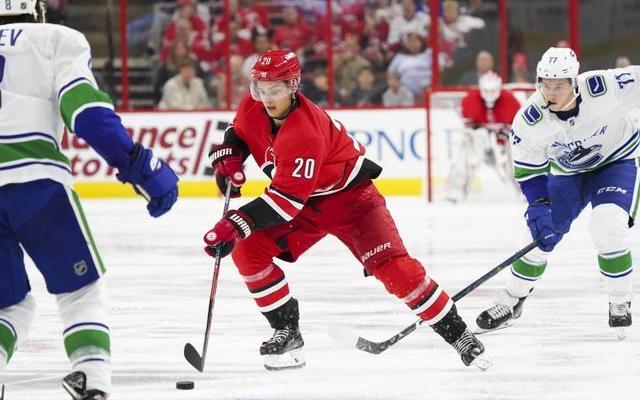 Sebastian Aho put on an impressive performance on Saturday with a four-point night, including the game-winning goal to lift the Hurricanes over the Wild 5-4 in overtime. The win is the fourth straight for Carolina, pushing their record to 4-0-1, good for first place in the Metropolitan Division. Led by first-year coach Rod Brind’Amour, the Canes are off to a fast start, which may help lead to their first playoff appearance since 2009.

An Offseason of Changes

Hard times had fallen on a Hurricanes franchise that has only qualified for the postseason once since their Stanley Cup victory in 2006. Franchise icons Eric Staal and Cam Ward had moved on, and many experts wrote off Carolina as a rebuilding team who still had a couple years to go before making a run at the playoffs.

The rebuilding started with finding a head coach. Carolina hired Brind’Amour as their head coach in May of 2018. He had spent the last several seasons behind the bench as an assistant coach, serving most recently under Bill Peters. He is a Hurricane legend, spending 10 years in Carolina and serving as the captain of the Cup-winning team. The team has even retired his number 17. 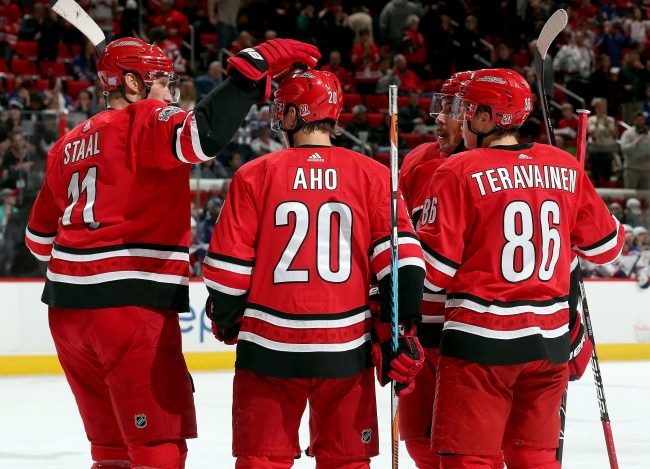 With a fan-favorite now behind the bench, the next step was to shake up the roster. This June the Hurricanes traded former first-round picks Noah Hanifin and Elias Lindholm to Calgary in exchange for veterans Dougie Hamilton and Micheal Ferland. That same weekend, with the second overall pick, Carolina selected the highly skilled winger Andrei Svechnikov in the 2018 NHL Draft.

A little over a week later, the Canes signed defenseman Calvin de Haan to a 4-year deal, further solidifying their blue line. They also addressed the departure of Ward, signing Petr Mrazek to compete for the starting goaltender job. At the beginning of August, the active Carolina offseason concluded with the trade of star forward Jeff Skinner to Buffalo is exchange for a prospect and several draft picks.

The new acquisitions joined a young core highlighted by Aho, Teuvo Teravainen and Jaccob Slavin, as well as veterans Jordan Staal, Justin Faulk, and captain Justin Williams. With a new coach and revamped roster, the Hurricanes garnered some intrigue heading into the season as a possible surprise team.

After an overtime loss in their first game, the Hurricanes offense has been nothing short of explosive. Carolina has scored three, eight, five and five goals in their last four games, winning all of them. Aho, who had two goals yesterday versus Minnesota, leads the team with 10 points. Williams is next with seven points, while Staal and Teravainen each have six.

As for the newcomers, the rookie Svechnikov has two goals to start his career. Ferland is fourth on the team with five points, while de Haan and Hamilton are providing strong contributions on the defensive end.

All of Carolina’s early season success has come without starting goaltender Scott Darling. Darling tweaked his hamstring in the preseason, but could soon begin a conditioning stint before returning to game action. In the interim, the Hurricanes have had to rely on newcomers Mrazek and Curtis McElhinney, who was recently claimed off waivers from Toronto. When Darling makes his return, it will likely make it easier for Carolina to continue their strong play.

There are always surprise teams in the early stages of the season. However, Carolina’s mix of youth and experience, as well as a deep blue line and the inevitable return of their goalie, make them a good bet to continue to win games and finally break their playoff drought. 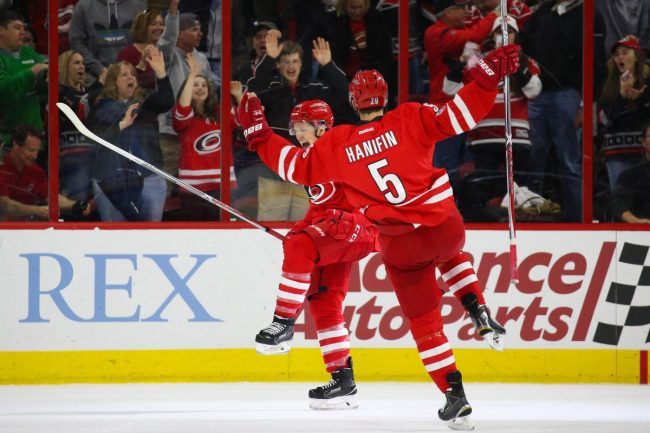 The Canes have a tough stretch of games coming up that will provide a test for this young team. Tonight, they’re in Winnipeg against the Jets. On Tuesday, they’ll be in Tampa Bay taking on the Lightning, before returning home next Saturday to host the Avalanche.

Join us on Telegram to get even more free tips!
« Auston Matthews: The Forgotten NHL SuperStar
Vegas Struggling Out of the Gate »
SportingPedia covers the latest news and predictions in the sports industry. Here you can also find extensive guides for betting on Soccer, NFL, NBA, NHL, Tennis, Horses as well as reviews of the most trusted betting sites.
NHL Betting Tips, Predictions and Odds 800