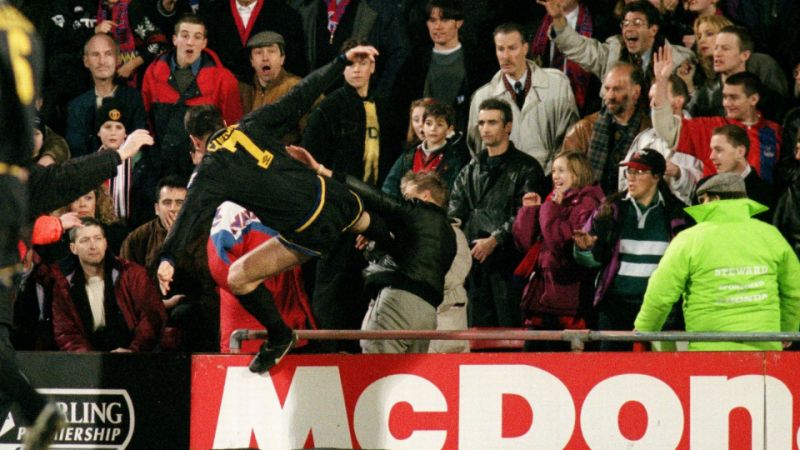 Here we will present you with some forgotten moments from the history of the Premier League. Today we start with the bad boys, or should we call them tough players? Any memories of Cantona, Scott Parker or Stiven Gerrard? And what a group of tough players will it be without Roy Keane? Of course we’ll find a place for him, so here we go:

Early days in the Premier League. Eric Kantona was known for his ability in front of goal, but he found time to teach his collegue defenders how to tackle.

This time on the receiving end was a fan!!! If you see Cantona around, you’d better pick your words wise! Undoubtedly the most memorable moment of the Premier League history.

It is a story with two episodes. First Haaland had something to tell Keane when he fell to the ground and injured his ligaments. Well … Keano had a good memory and in the next season meeting he broke Haaland’s leg. Later in his autobiography Keane said that he intended to break both of his legs with that horror tackle.

He gets sent off just 38 seconds after coming on as a sub. We hope he is not teaching the guys at Glasgow Rangers to do that!

This is how Scott Parker used to transform footballers into gymnasts. Joe Cole performing a backflip in the air.

Join us on Telegram to get even more free tips!
« Manchester City vs Wolverhampton Preview, Tips and Odds
The Most Emblematic Moments in Premier League history »
SportingPedia covers the latest news and predictions in the sports industry. Here you can also find extensive guides for betting on Soccer, NFL, NBA, NHL, Tennis, Horses as well as reviews of the most trusted betting sites.
Soccer Betting Tips, Predictions and Odds 15814