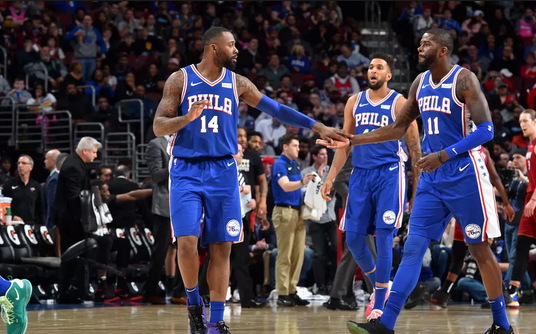 Joel Embiid will remain out of the Sixers lineup, and so once more we will get a heavy dose of Boban. The man is rated as a top-five all-time player based on his production in his limited minutes, and now he finally has a team that is trusting in his ability and can get the job done. Philly is coming off a chippy loss against Portland, and it was one where Ben Simmons was challenged by Jusuf Nurkic. They need to bounce back.

The Pelicans were able to frustrate the Lakers early and often, and despite AD being out, got it done in front of the home fans. The Pelicans won’t be back in the playoffs this year, but they continue to fight hard. Rookie Kenrich Williams has played well, while Julius Randle has proved to be, at $9 million this year, a tremendous value signing. At home once more, we’ll see if the crowd can carry them.

Sixers: They score the fifth-most points of all teams in the NBA, and this is something we should expect to continue. They have so many different scorers now, that even when Embiid is out, the points keep coming. Jimmy Butler and Tobias Harris can both create their own shots, while JJ Redick is highly efficient when launching up the deep ball. All three of them will be vital in tonight’s game, as will Mike Scott off the bench, who is shooting the three well of late for the Sixers.

Pelicans: They are the #4 scoring offense in the league…. Which tells us absolutely nothing about this battle. They have been in a haze of late with Anthony Davis re-joining the team, and they have been losing games all season with a lack of defense. Davis being in the lineup has hurt the value of Jahlil Okafor, who had been on a tear, significantly. Jrue Holiday is averaging 21-5-8 on 51% shooting, and Julius Randle is averaging 20-9-3 on 54% shooting. Rookie Kenrich Williams has been playing well as a starter. That’s where the good news stops.

When these teams met in Philly on Nov. 21, the game went down to the wire, with the home team ultimately emerging with a 121-120 win. Joel Embiid had 31 and 19, while Ben Simmons posted 22-8-7. AD struggled with his shot, but both Jrue Holiday and E’Twaun Moore added 30 for New Orleans.

Be sure to bet PHI -1.5! New Orleans will not have the same luck that they did in their last game. With Embiid out, Philly will have to work harder and play even more as a team to emerge as the victor, but it sure is doable.

AD won’t play many minutes or have a huge impact on the game.

Join us on Telegram to get even more free tips!
« San Antonio Spurs at New York Knicks Preview, Tips, and Odds
Oklahoma City Thunder at Denver Nuggets Preview, Tips, and Odds »
SportingPedia covers the latest news and predictions in the sports industry. Here you can also find extensive guides for betting on Soccer, NFL, NBA, NHL, Tennis, Horses as well as reviews of the most trusted betting sites.
NBA Betting Tips, Predictions and Odds 1369