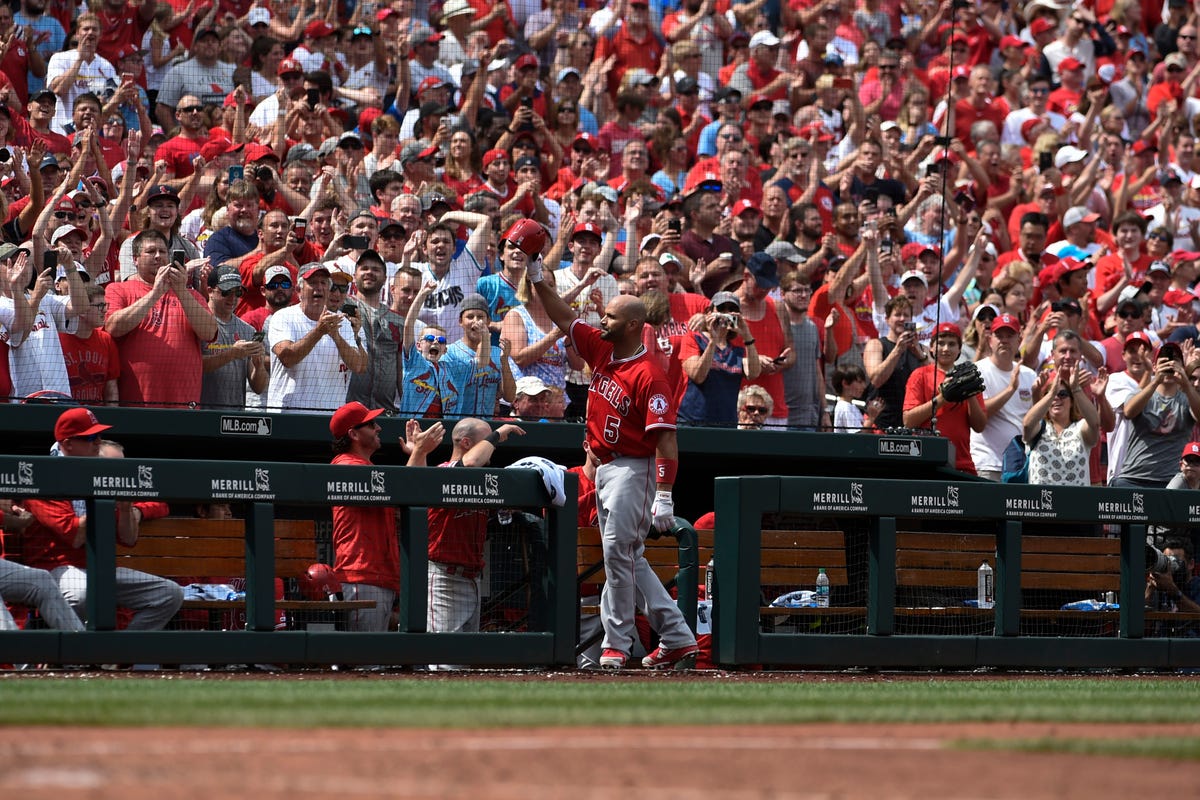 They haven’t been playing great this year, but they have started to come on of late. If they played in the NL, the Angels would likely be a potential playoff team, but it’ll take a long winning streak in the AL to get themselves into contention. This is the first series in St. Louis for Albert Pujols since he left more than eight years ago, and it has been terrific to see the crowd welcome him with open arms.

The Cardinals, on the other hand, are currently in third place in the NL Central. They had their turn atop the division, but they have since slipped. It was nice to see them on top with the win last night, but they still have some climbing to do. This is not an extremely talented group, but it is definitely one that is underachieving. The Albert Pujols era was a great time to be a Cardinals fan, as we are all reminded by his return.

Angels: Mike Trout has continued to crush the ball this year, as the 27-year-old has 22 home runs, 56 RBI, plus a .468 OBP. He is batting .306 and has led the team once again. Nobody has been anywhere close to as productive as him, which has been the issue. Without stellar pitching, you need various options in your lineup who can crush the ball, and bring guys around. Tommy La Stella and Albert Pujols each have over 40 RBI, but that’s all. Griffin Canning has probably been their most consistent starter, as he has gone 2-4 with a 3.88 ERA in 10 starts. Nobody else can keep the runs down, and Matt Harvey and Trevor Cahill are still hurt.

Cardinals: It has been the Marcell Ozuna show here in STL this year. He’s crushed 19 long balls while bringing in 60 runs. He has gotten his average steadily up over the past month as it now stands at .259. Paul Goldschmidt has not done anything close to what he did in Arizona, with 14 HRs, and 31 RBI, with a .256 average. Matt Carpenter is batting .218, while Harrison Bader is at .214. They need quite a few players to step up, but they have plenty of time to do so. They have also had no consistency with their starting pitching, something they hope turns around.

For both of tonight’s starting pitchers, it is their first start against the opposing team in quite some time. Miles Mikolas started (took the loss) against LAA back in 2014 during his first MLB stint with Texas. Tyler Skaggs took a no-decision against STL in 2013. Both pitchers allowed five runs in 5 2/3 innings.

Make sure you bet on the Angels to finish the series on a high note. LAA +112. Mike Trout’s dominance will help lead the team to a win this time through.

Join us on Telegram to get even more free tips!
« Colorado Rockies at Los Angeles Dodgers Preview, Tips and Odds
Atlanta Braves at Chicago Cubs Preview, Tips and Odds »
SportingPedia covers the latest news and predictions in the sports industry. Here you can also find extensive guides for betting on Soccer, NFL, NBA, NHL, Tennis, Horses as well as reviews of the most trusted betting sites.
MLB Betting Tips, Predictions and Odds 241