The sheikhs of European football – How sport and oil mix together

The new football season in Europe began on August 5th, but the official data on player salaries became available just in the last few weeks. When analysing this data across Europe we noticed a major increase in the wages of three of Europe’s leading teams in terms of their ownership’s wealth. This SportingPedia report is focusing on the European teams, owned by the wealthiest Arab sheikhs who are major players in the production of oil.

These football sheikhs are:

We decided to calculate how many barrels of oil these gentlemen need to sell in order to cover the combined yearly wages of their players. We have taken the median price of each country’s international prices:

Here are the main findings: 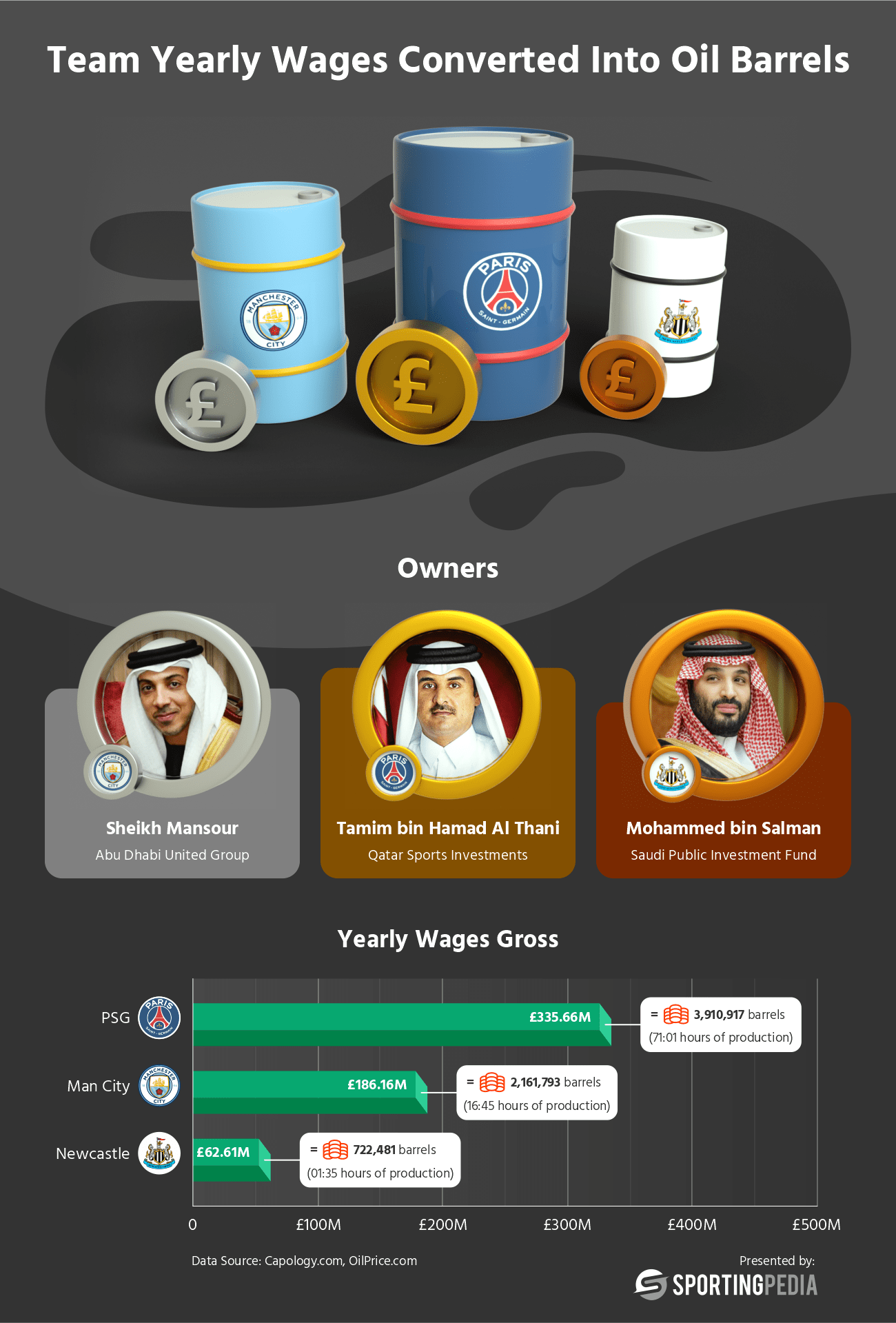 The Emir of Qatar, Tamim bin Hamad Al Thani saw the chance of acquiring his very own football club in 2011. A few months later in March of 2012, he took full control of PSG for less than £100 million. He has installed Qatar Sports Investments (QSI) chairman Nasser Al-Khelaifi as PSG’s president since then, but Al Thani has the final word on all operations. It was 2017 when PSG made their statement by making Neymar the most-expensive footballer ever. Earlier this year, Al Thani was personally involved in convincing Kylian Mbappe to remain in the French capital and rewarded the player by making him the highest-paid footballer in the world at the tender age of 23. Since 2012 QSI has invested over £1.3 billion in new players. That delivered 8 league titles, but the main target – the Champions League, still remains a dream. Paris Saint-Germain is currently valued at around £2.88 billion.

Sheikh Mansour – now the prime minister of UAE and member of the Abu Dhabi ruling family was the pioneer and paved the way for the others. He took control of Manchester City in 2008 in a deal worth £210m and since then has invested over £1.5 billion. For the time at the helm of the club, the Sheikh changed the team from mid-table contender to one of Europe’s giants. Manchester City is the dominant force in the Premier League, but is still waiting for the only missing piece in its trophy cabinet – the Champions League title. Now the club is valued at over £4 billion.

Mohammed bin Salman is the Crown Prince and Prime Minister of Saudi Arabia and in 2021 became the owner of Newcastle for the price of £305 million. Unlike his two fellow Arab sheikhs, Mohammed bin Salman is taking a more steady approach and has been careful when purchasing expensive players and so far has invested close to £240 million on new signings. The team has been wandering in lower and mid-table positions for years, but with the financial backing of the Saudi Prince there are no restraints as to what the club can accomplish in the not so distant future. The intentions of Mohammed bin Salman were made crystal clear last week, when Yasir Al-Rumayyan the Chairman of Newcastle declared that the plan is to see the team grow from the £350m valuation and reach an estimation of at least £2.5 billion.

« Yellow and red cards distribution across the European top 5 leagues this season
Most influential female football players and how much they make per Instagram post »
SportingPedia covers the latest news and predictions in the sports industry. Here you can also find extensive guides for betting on Soccer, NFL, NBA, NHL, Tennis, Horses as well as reviews of the most trusted betting sites.
Sports Industry Reports and Analyses 66