The opening game of the World Cup 2022 is already in the books. Despite the massive spending on the global event’s organisation on behalf of Qatar, the middle-eastern monarchy has the team with the lowest market value of all 32 participants with just €14.9 million combined valuation of their 26 men. 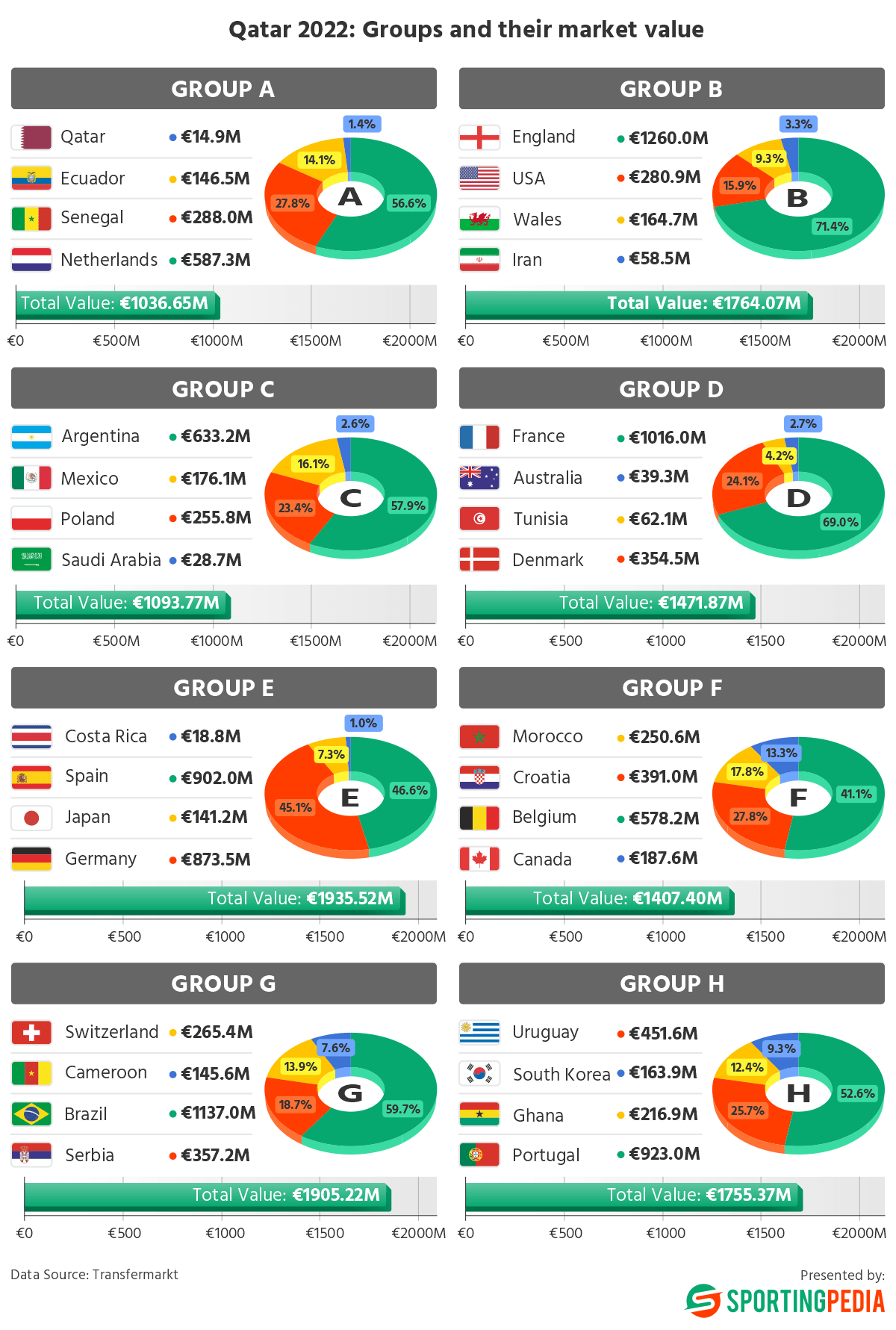 Our calculations show that all eight groups exceed the €1 billion valuation, but none reach the €2 billion mark. There are still large differences, groups with a pronounced leader and groups with a more balanced distribution.

Groups with the highest market value

Germany and Spain – two of the previous three World Cup winners, were paired in Group E of the tournament. They will face Costa Rica and Japan on their way to the knock-out phase. That is the most valuable group in Qatar 2022, with an estimated market value of €1.936 billion. Spain and Germany are the outright favourites to reach the direct eliminations and also have the lion’s share of the group’s total market value, while Japan accounts for little more than 7%. Costa Rica’s attribution makes up a fraction less than 1% of what group E is estimated to be worth, which represents the lowest share a team has of their group’s total.

Despite doing so by a very slight margin, the only other group to exceed the €1.9 billion valuation is Group G, which features the second most expensive squad selection in Qatar. Brazil and the teams of Switzerland, Cameroon, and Serbia combine for a total of €1.905 billion in market value. The group can be described as highly competitive, as only 11.1% separate the team with the second-highest valuation from the last one.

Groups with the lowest market value

The least expensive group is put together by the national selections of Qatar, Ecuador, Senegal, and the Netherlands, who form Group A. The only European squad’s valuation accounts for 57% of the total pot.

The hosts from Qatar have the team with the lowest market value in the tournament and it accounts for a tiny 1.4% of their group’s total. Argentina and Lionel Messi were assigned to Group C, which has the second lowest valuation and, alongside Group A, is the only other one to remain under the €1.1 billion mark with €1.09 billion. The other teams there are Mexico, Poland and Saudi Arabia.

Knowing that England has the highest value, it is interesting to see that Group B, in which the Three Lions have the USA, Wales, and Iran as rivals, ranks third out of the eight groups. According to the numbers, this is the most unequally-matched group, with the value of England alone accounting for more than 71% of the total valuation of the group.

Kylian Mbappe and the reigning champions from France will begin their title defence in Group D. Denmark is the other favourite on paper to make the direct eliminations, and their share represents 24% of the total group value. The other two countries, Australia and Tunisia, are responsible for 3% and 4%, respectively.

Belgium, Morocco, Croatia, and Canada fall into Group F of the tournament, which has the sixth-highest total value of Qatar’s eight groups. It is, however, the most evenly-matched of the eight and the only one in which all four participants contribute with over 10% of the total valuation.

The most experienced player and the least experienced team of the tournament will face each other in Group H. Cristiano Ronaldo’s Portugal has Ghana, South Korea, and Uruguay as opponents. Despite the fact that the European country’s value represents over 50% of the group’s total, it can be described as another very evenly-matched one, because the gap between the team with the 2nd highest contribution and the last one is just 13.3%.

« Qatar 2022: Teams & players ranked by international experience
Kylian Mbappe amounts for 10.8% of the entire Group F's €1.49B market value »
SportingPedia covers the latest news and predictions in the sports industry. Here you can also find extensive guides for betting on Soccer, NFL, NBA, NHL, Tennis, Horses as well as reviews of the most trusted betting sites.
Sports Industry Reports and Analyses 56