Cristiano Ronaldo and Lionel Messi will soon have their final shots at winning the elusive World Cup trophy – the only missing piece of silverware of their illustrious careers. Another thing they share is the fact that they both are their national team’s most-capped players – i.e. they made the most international appearances in matches for their country.

In this SportingPedia report our team decided to identify the most experienced players and teams in Qatar this summer. We pulled data for the number of international matches of all 829 players and calculated the total sum of player caps for each one of the 32 teams at the forum. We also identified and ranked the 10 players with most international caps: 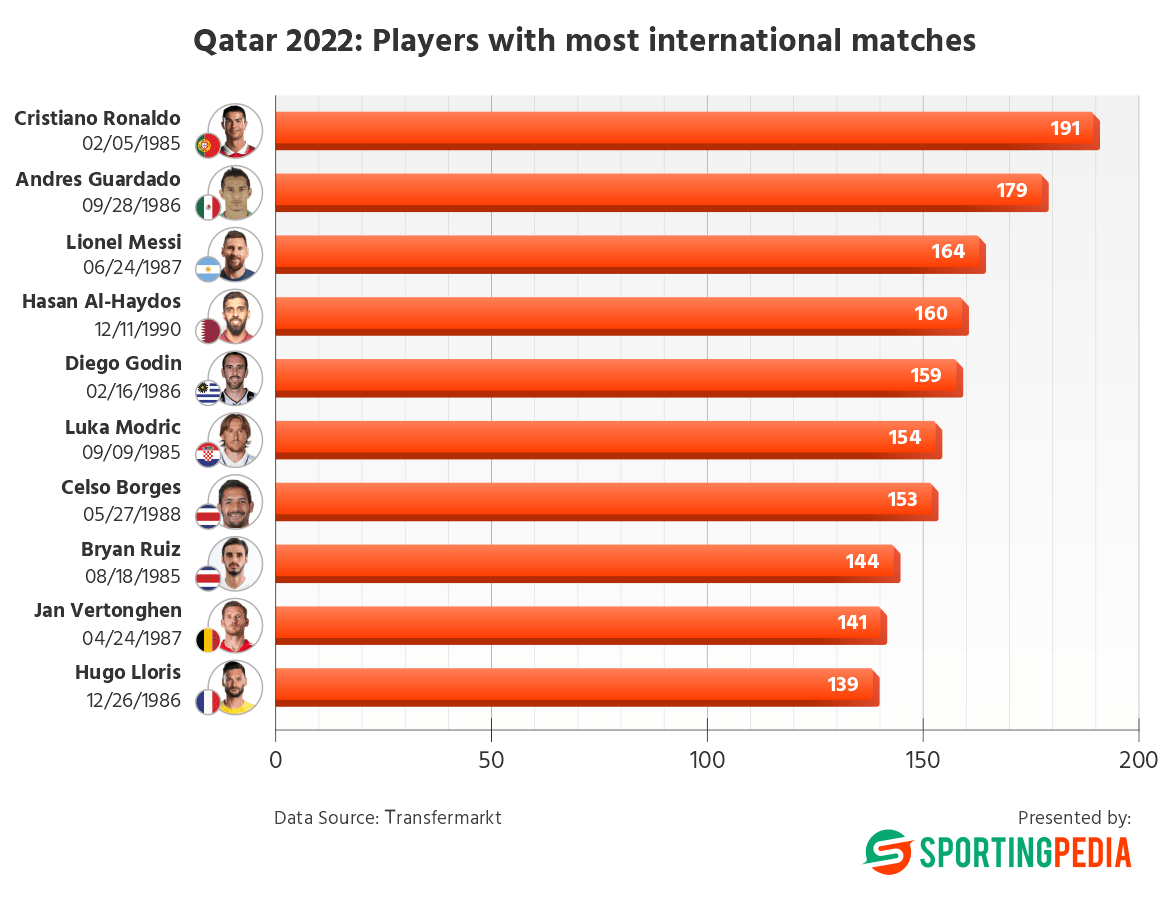 The most experienced players

A breakdown of the 10 players with the most international caps shows us 3 active Ballon d’Or winners, including Cristiano at the top and Messi at #3. We can also see that Costa Rica, of all nations, has 2 representatives among the 10 most experienced footballers.

20 of the 32 teams can rely on the experience of at least one player with a century of international caps. Belgium’s head coach Roberto Martinez on the other hand has called-up 6 players who have already worn the Red Devils’ shirt more than 100 times. Uruguay is 2nd in this aspect, and besides the legendary attacking pair of Edinson Cavani and Luis Suarez, another 3 players have already amassed hundred appearances for the national side. England is 1 of 12 nations not to have such an experienced footballer among their ranks.

Out of curiosity we calculated the total times these 10 have represented their nations and the number is 1584. Just for perspective, the 52 players called up by Spain and England are totaling 1493 among them.

24 players will have the chance to debut for their countries in Qatar. Jose Sa from Portugal might wear their teams’ jerseys for the very first time at the age of 29. That makes the Portuguese goalkeeper the oldest potential debutant at the World Cup, as he is 3 weeks older than Niclas Fullkrug from Germany – the only other player at the age of 29 and with no international experience behind his back.

The most experienced teams

International experience is a key factor in a tournament like the World Cup, where everything is decided within the timeframe of one month. Undoubtedly, it can be a crucial factor in some defying moments, especially under the unfamiliar conditions of the global forum in Qatar. 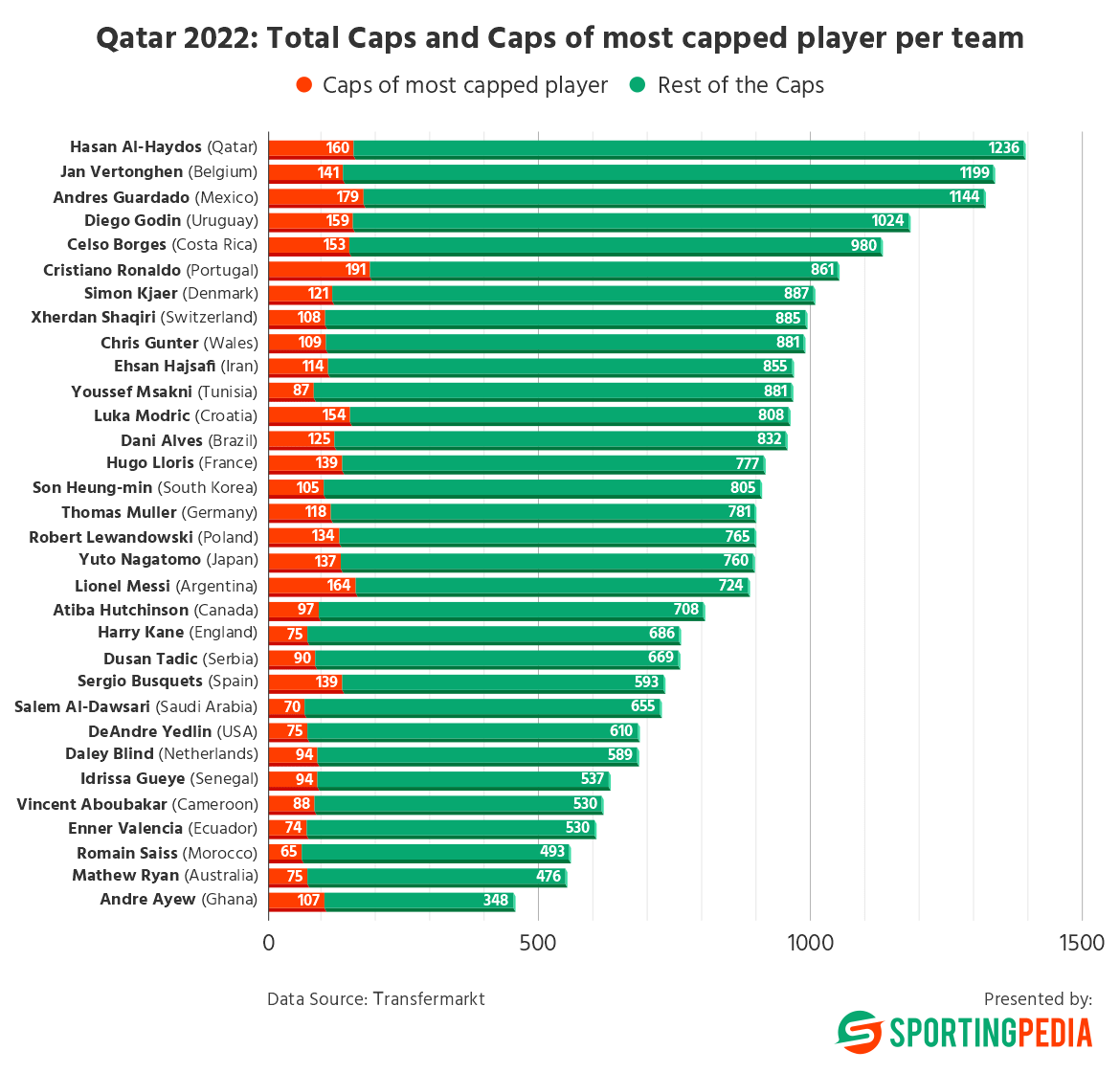 If we consider England, France, Germany, Brazil and Argentina as the heavy favourites to lift the World Cup title, then it is Selecao who will enter the battle with the most experienced squad. Tite’s selection ranks only 13th when it comes to the highest experienced teams to feature in Qatar. The hosts from Qatar have assembled the most experienced selection, our data shows, with Ghana at the opposite end of the ranking.

There are four European participants occupying positions within the top 10, with Belgium 2nd and Portugal 8th. On the other hand, England, Spain, Serbia and the Netherlands are all among the 12 least experienced teams in the tournament.

The South American giants Brazil and Argentina are somewhat in the middle of the mix, with Selecao ranked 13th and Albiceleste 19th and the North American representatives Canada and USA occupy the 20th and 25th positions in the ranking for most experienced teams in Qatar.

If we take the average number of caps per squad, then Mexico, Belgium and Qatar are the only nations whose players exceed 50 international caps, while Ghana is the only one to remain below the 20 mark.

Other than the Black Stars, the African continent will have four other teams at the World Cup. Cameroon, Morocco and Senegal also fall among the 6 least experienced squads in Qatar, while Tunisia ranks just outside the top 10 at 11th place.

« Qatar 2022: 20% of all players at the World Cup play in England, over 10% in Spain
Qatar has the lowest-valued squad in the lowest-valued group at the World Cup 2022 »
SportingPedia covers the latest news and predictions in the sports industry. Here you can also find extensive guides for betting on Soccer, NFL, NBA, NHL, Tennis, Horses as well as reviews of the most trusted betting sites.
Sports Industry Reports and Analyses 56