Qatar 2022: The lowest valued teams that passed the group stage vs the highest valued ones that could not

The World Cup Group Stage is already history. While some teams exceeded expectations and not only played very well but also progressed to the knock-out stage, other teams named among the favourites disappointed and are no longer part of the tournament.

Our team at SportingPedia decided to analyse the value of the least expensive teams that reached the knock-outs as well as the most expensive ones that failed. 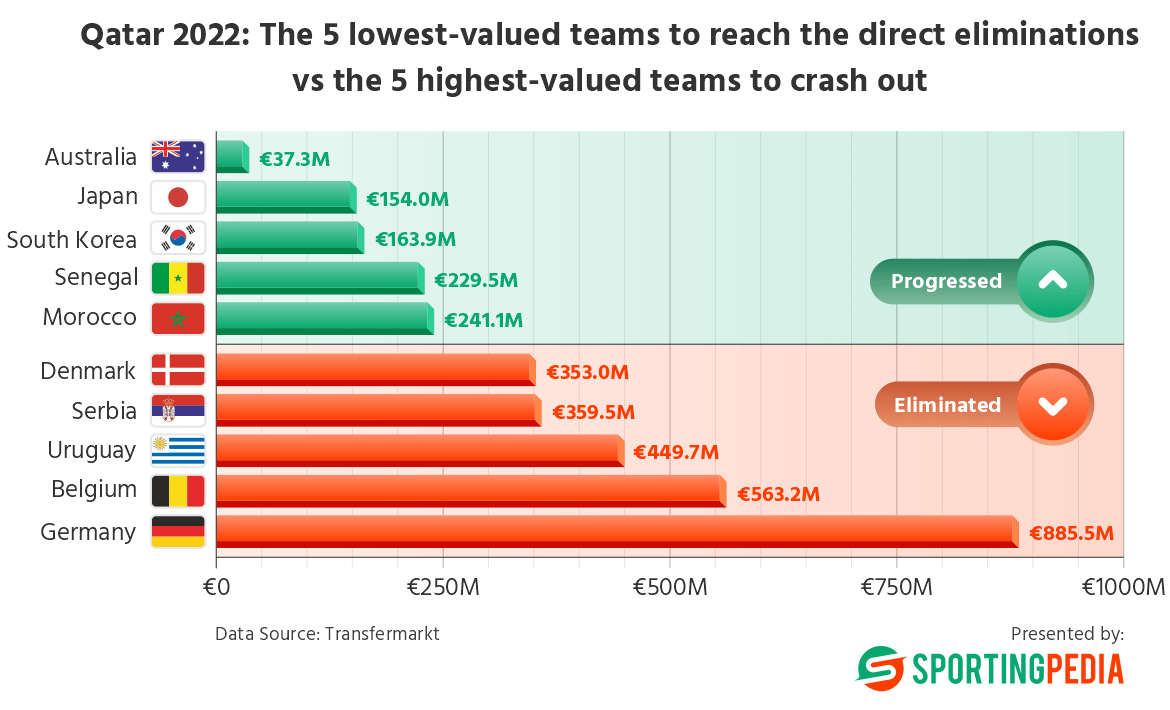 Although already eliminated during the weekend, Australia and Senegal deserved their progress through the group stage.

Australia is the third lowest-valued squad in the tournament, only above Qatar and Costa Rica. However, the spirit they showed deserves nothing but respect.

The value of Senegalese team (€229.5 million) is highly dependent on their star player and Ballon d’Or runner-up – Sadio Mane, who could not take part in the tournament due to injury.

Japan, South Korea, and Morocco still have chances to progress to the Quarter Finals but any of them progressing would be considered a “surprise”.

Denmark and Serbia were the teams which we could expect to deliver performance but they managed to earn just 1 point each. Although many expected much more from these two teams – they just could not fulfil their potential.

Uruguay failed to qualify after a dramatic last round which saw South Korea coming from behind to beat Portugal 2:1 after the 90th minute. Check our listing of the most reputable sports betting sites for the best odds and new players offers.

Germany and Belgium are the teams which can be considered “the flop” of the tournament. Both not only failed to progress but also showed rather shaky and unpleasant style and could not actually convince anyone that they deserved to progress. They are also the two most-expensive teams that didn’t make it past the group stage.

« Kylian Mbappe amounts for 10.8% of the entire Group F's €1.49B market value
An exclusive interview with Alex Stepney - a goalkeeping legend of Manchester United »
SportingPedia covers the latest news and predictions in the sports industry. Here you can also find extensive guides for betting on Soccer, NFL, NBA, NHL, Tennis, Horses as well as reviews of the most trusted betting sites.
Sports Industry Reports and Analyses 66