The recent advances in Nutritional Science and Supplementation and Sports Science have had a tangible influence on the longevity of elite athletes’ careers. Typically footballers’ performance is expected to decline in the latter years of their careers. That has definitely not been the case with some of the most renowned current names in world football. Only three active players have won the Ballon d’Or: Cristiano Ronaldo, Lionel Messi, and Luka Modric, all of whom are above the age of 35. Karim Benzema who turns 35 in December was awarded the best player in the Champions League last season and is very certain to be the next recipient of the most coveted individual football accolade.

At the same point in their careers, prominent members of the previous generation were not having it as good. Zinedine Zidane had retired, Ronaldinho had no team while Xavi was performing in Qatar.

This Sunday – 18th of September, Arsenal manager Mikel Arteta introduced youngster Ethan Nwaneri late in the stoppage time of the already decided match against Brentford, with the Gunners comfortably leading 0:3. So far, nothing out of the ordinary, but the entrance of Nwaneri broke a number of records. He became the youngest footballer to play in a professional game at 15 years and 181 days of age, not just in the Premier League era, but in the whole history of the English top tier.

This widening of the age gap of professional football players to way over 20 years prompted the team at SportingPedia to examine the average ages of the 98 teams in Europe’s top five leagues, as well as the youngest and oldest players utilised this season. We used data from The Football Observatory to conduct this research.

Age is just a number they say. Well, the youngest assembled squad in Europe’s top 5 leagues is that of Valencia at 23 years 256 days of age, while the oldest of all teams is Bochum, whose players averaged at 29 years 329 days old. Mikel Arteta has opted to challenge for the title or at least the top-4 places in the Premier League with the youngest team in the country, alongside Southampton, with both selections averaging at 24 years 146 days of age. The English Premier League has the youngest teams of all the five leagues in the study, while the most experienced are in Spain.

Below you may find the oldest and youngest professional players per league and the corresponding age gap between them. 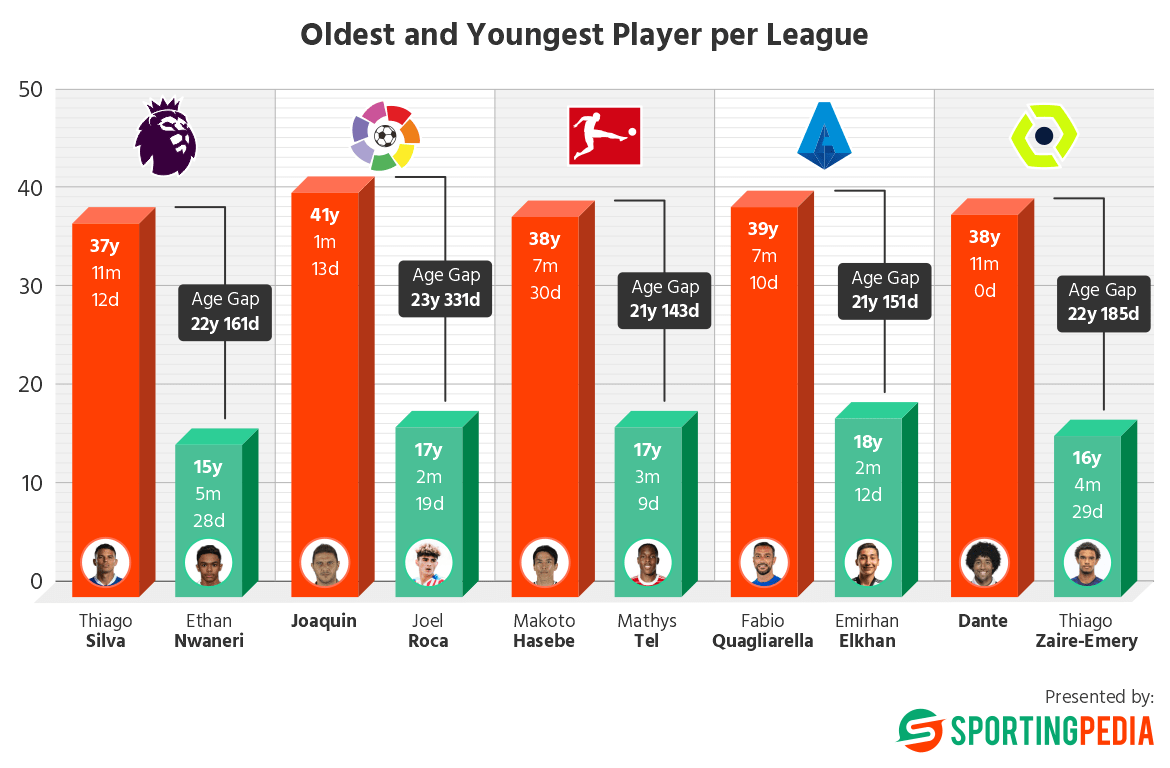 Several records in European football have been broken in recent days. Last Wednesday, Luka Modric became Real Madrid’s oldest player in a Champions League game since 1965. Then, on Thursday, Joaquin scored for Betis in a Europa League match, becoming the competition’s oldest player to do so. Last but not least, Ethan Nwaneri was introduced late against Brentford on Sunday, becoming the youngest player in the top English level at 15 years and 181 days. The youngest and oldest footballers to have performed this season in the five different leagues are shown below.

Below you may find the average ages of Premier League, La Liga, Ligue 1, Serie A and the Bundesliga. 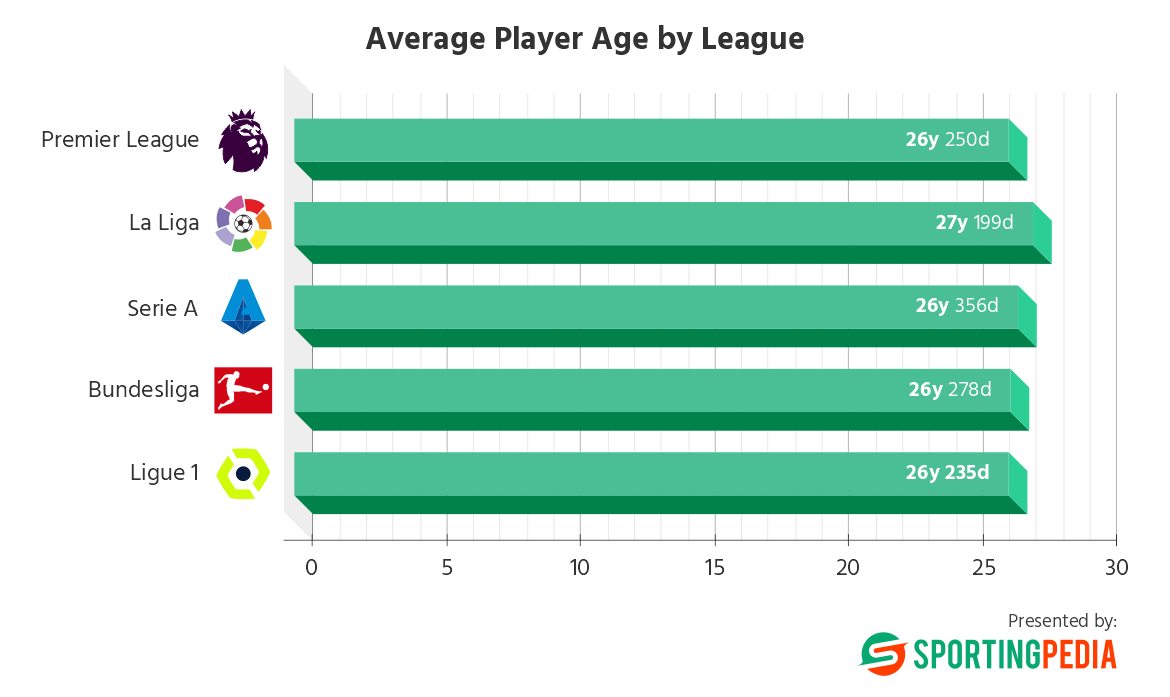 « Money talks: The profit made from the 10 most expensive summer signings
Worth over £500 million, England's attackers scored only 1 open play goal in 540 minutes »
SportingPedia covers the latest news and predictions in the sports industry. Here you can also find extensive guides for betting on Soccer, NFL, NBA, NHL, Tennis, Horses as well as reviews of the most trusted betting sites.
Sports Industry Reports and Analyses 44