One facet of the game caught our attention during the latest weekend of club action. The regulations are identical for everyone, yet in certain leagues, the officials have been particularly quick to pull out a red card when compared to others. A week ago, on Saturday, September 17th, Japanese international Shoya Nakajima debuted for new team Antalyaspor in the Turkish Super Lig and was dismissed barely 20 seconds after coming in as a substitute. Less than 24 hours later Jan Clair-Todibo of Nice was sent off just 9 seconds after kick-off in the French Ligue 1. This prompted SportingPedia‘s editorial staff to examine the distribution of yellow and red cards throughout Europe’s five major leagues this season. When it comes to yellow cards, nothing out of the usual occurs, but the statistics for red cards are straight out ludicrous. We also ranked the dirtiest teams and those with the fewest official warnings.

Nathan Collins of Wolverhampton Wanderers was dismissed in the first half of the Premier League game against Manchester City on 17th of September, becoming only the fourth player to see red in the English top flight this season. There has never been more than one sending off in any of the English Premier League’s seven match days! In the course of the current season, there have been just shy of 2 yellow cards on average shown during a Premier League game, the lowest number among Europe’s top five divisions. 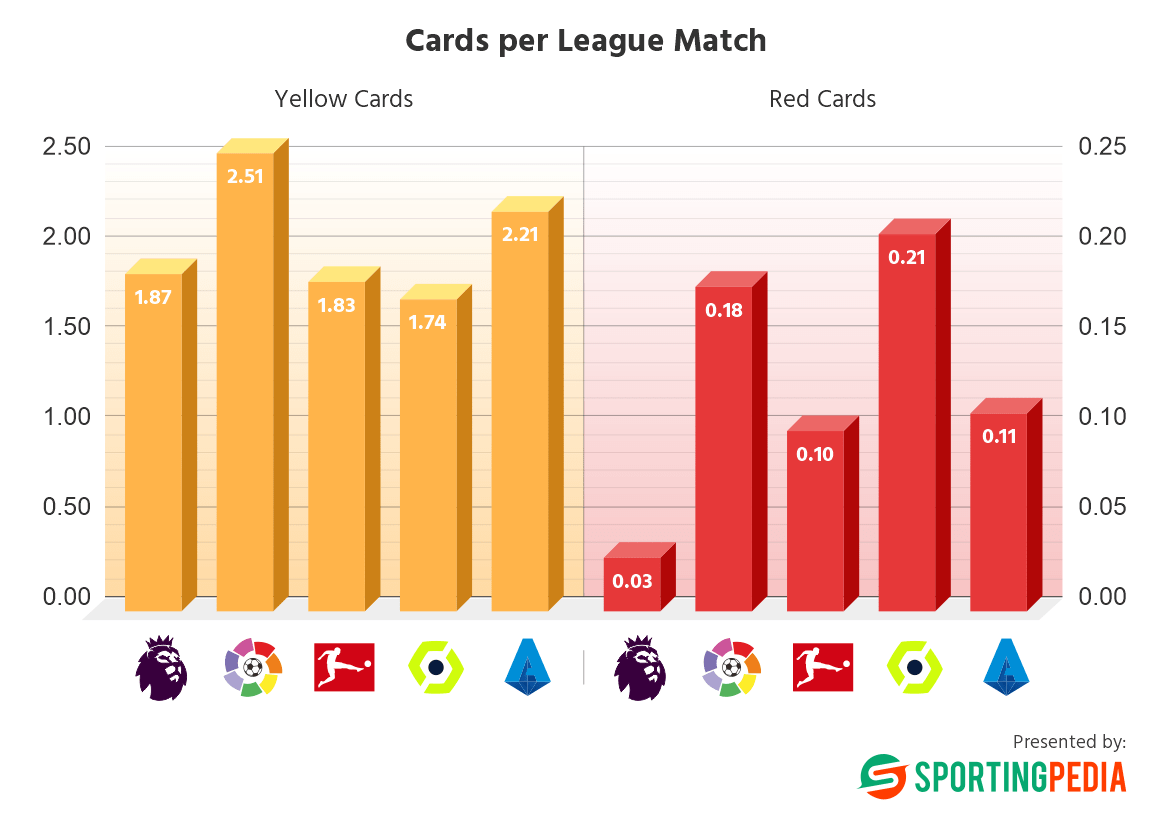 Is it the fault of the officials, or is it simply a difference in perception of the football game and physical contact? In stark contrast to the top level of professional football in England, the one in France is far more heated. In Ligue 1, there have already been 34 dismissals.

All five leagues are in the early stages of the season, but the rounds played differ, so we divided the number of cards received by the number of games played, and the results are astounding. There have been less than 0.03 red cards shown in each of the 134 Premier League games, with only the German Bundesliga staying in the single digits with 9% chance of witnessing a player dismissed. The numbers for the other three leagues are all higher.

Manchester City is the cleanest team in Europe’s top five divisions in terms of fair play. After six rounds of play, Pep Guardiola’s players have received less than one yellow card per game. Brentford are second, although their footballers amass 1.14 cards per game, exceeding the 1.0 mark, while Brighton finish off the Premier League top three with 1.17.

Only one other of the 98 teams analysed has managed to stay under the 1.0 DP barrier, with that being the German Bundesliga leaders Union Berlin at 0.86, while Roma, led by Jose Mourinho, earns precisely one yellow card every match in the Italian Serie A.

Just like there are only two teams who so far remain below the 1.0 mark, there are also two clubs that are leaving all of the rest behind when it comes to dirty play. Sevilla and Reims are the only sides across the top 5 leagues who generate more than 5 DP and because of that are crowned as the most ill-disciplined. The Spaniards are “the dirtiest team in Europe” with 5.17 DP per match, while Reims are close at 5.13.

Below you can find a detailed breakdown for all five leagues and the separate teams.

« Worth over £500 million, England's attackers scored only 1 open play goal in 540 minutes
Yellow and red cards distribution across the European top 5 leagues this season »
SportingPedia covers the latest news and predictions in the sports industry. Here you can also find extensive guides for betting on Soccer, NFL, NBA, NHL, Tennis, Horses as well as reviews of the most trusted betting sites.
Sports Industry Reports and Analyses 66