The most recent weekend of European football action is already in the past, and SportingPedia‘s team decided to examine one essential aspect of the game – the number of yellow and red cards shown in the continent’s top five leagues.

The cards distribution in each individual championship is very important, as it will show where the referees are quick to bring out the card to discipline players by issuing an official warning, and where they are more amicable towards the individuals with whom they share the field for 90 minutes.

Our data analysis reveals a significant variation, particularly in the distribution of red cards. With only 7 sendings off in all football matches since the start of the season, the Premier League is on top of the fair play charts. On the opposite side is the French Ligue 1, with a total of 39 footballers being sent off.

We should clarify that there is no correlation between the number of issued red cards and the number of injuries in the separate European leagues. That means that a higher number of red cards in a specific championship does not cause more injuries among players. However, it reveals how referees adapt to the specific style of football play in different championships.

Some of the key points 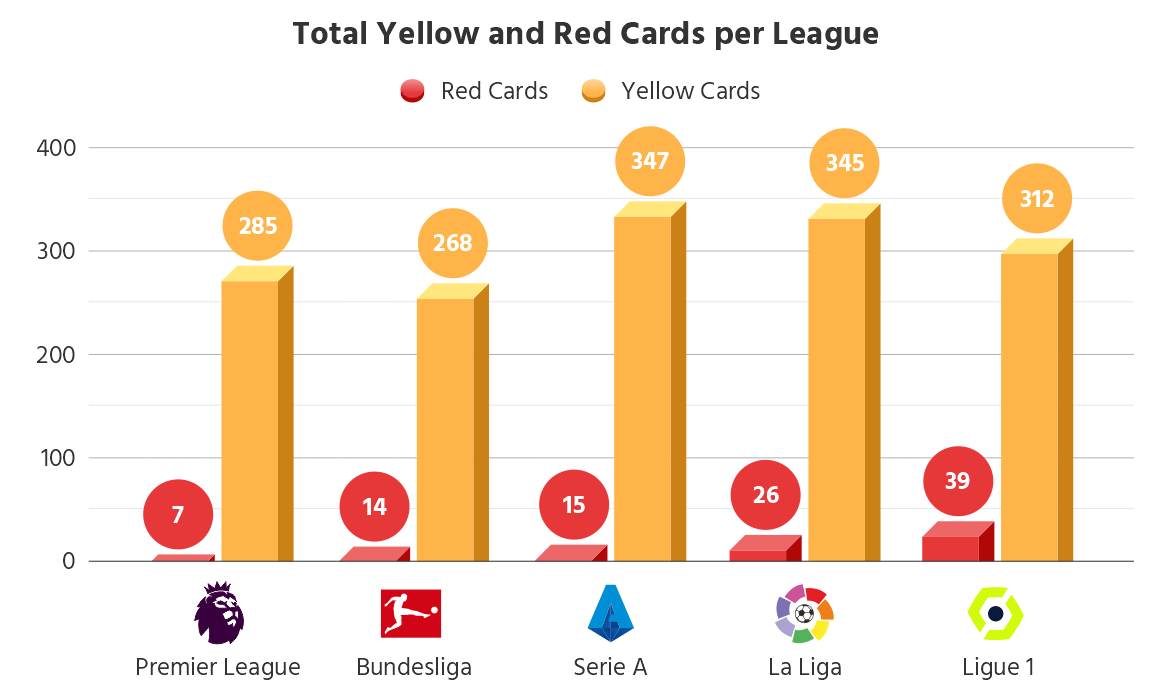 In 77 matches of the 22/23 season so far, the English referees issued 285 yellow cards and 7 red cards. They try to remain a peripheral figure during the 90 minutes, but sometimes officials put too much effort into that, instead of pulling the cards when necessary. This weekend, in the North London derby, Arsenal’s captain Martin Odegaard was spared the warning when clearly he deserved a yellow card. This was not the first similar case in the Premier League, scoring the lowest number of red cards across Europe’s top five leagues. However, as the latest round of Premier League action showed, it’s too early in the season to decide on any final scores. Just this weekend, there were three red cards, which brought the season’s total to seven. Fourteen of the twenty teams are still to be reduced to 10 men.

With 345 yellow cards thus far, the Spanish top flight takes the second place with most warnings among the top five European leagues. La Liga has been renowned for the fiery style of football, and players often go too far with their defensive plans. Also, the referees are always happy to book footballers for having a brawl. When considering the number of red cards that were shown to players, somehow La Liga is not close to the top with 26 sending-offs, trailing behind Ligue 1 considerably. We put that down to the players knowing when to stop. Let’s not forget that Spanish teams have mastered the skill of dragging the play out, as proven numerous times on the European scene. Six La Liga sides are yet to see their player being sent off.

The Italian league has seen the most yellow cards, with 347 issued in 80 matches thus far. The Serie A referees are rarely contemplating whether they should issue the first official warning, but when it comes to red cards, they seem to be hesitant. As a result, there have been a total of 15 dismissals so far. Some 23 yellow cards had to be given before a red one came out of the ref’s pocket. Three of the eight Serie A rounds in the 22/23 season, including the most recent one, have seen no red cards. Eleven of the twenty teams have been recipients of red cards.

The Bundesliga has witnessed the lowest number of yellow cards and the 2nd lowest for red cards, with 268 and 14, respectively. Despite seeing twice as many red cards as the Premier League, the referees in the German Bundesliga have issued far less yellow cards than the ones in England. It makes sense why they are one of the least-discussed officials in Europe. Seven of the 18 clubs in the German top-flight league are yet to experience how it feels to play with a reduced squad.

The most curious case is in the French highest division of professional football. The match officials in Ligue 1 have issued 312 yellow cards – the third-highest number of the five analysed championships, yet the highest number of red cards – 39. The only reasonable explanation for such a result is that the players in the French top flight are more prone into going in hard tackles, resulting in a higher risk for the opposition footballers’ health. There are only two remaining Ligue 1 teams who are still to witness one of their players sent off.

Fouls that look tough on camera might leave the player unscratched, but may also result in a severe injury. This is the reason why we were unable to establish a link between the number of issued red cards and the number of injuries in the separate leagues. Players also get injured while on international duty, but that might be a cause of the footballers being jaded and in need of rest.

« Gentlemen and barbarians in European club football - a study based on 22/23 season data
The sheikhs of European football - How sport and oil mix together »
SportingPedia covers the latest news and predictions in the sports industry. Here you can also find extensive guides for betting on Soccer, NFL, NBA, NHL, Tennis, Horses as well as reviews of the most trusted betting sites.
Sports Industry Reports and Analyses 66