The Liverpool – Manchester City derby is still fresh in our minds, and what impressed us most during Sunday’s clash of the titans was how Liverpool’s defenders managed to neutralise Erling Haaland – the striker in best form right now. On top of that, there were 10 teams involved in action on Sunday afternoon, but only one managed to score more than one goal. The Premier League continues during midweek and the results are very similar – 7 matches and 8 goals until Thursday, with only 2 of the involved 14 teams scoring more than once. Last night Brentford and Chelsea met on the field and the lowest paid defenders in the Premier League did the same job as the highest paid ones, with the game ending in a goalless draw. These developments prompted our analyst team at SportingPedia to look closer at the Premier League teams’ defence budgets and identify the best value for money defence this season. 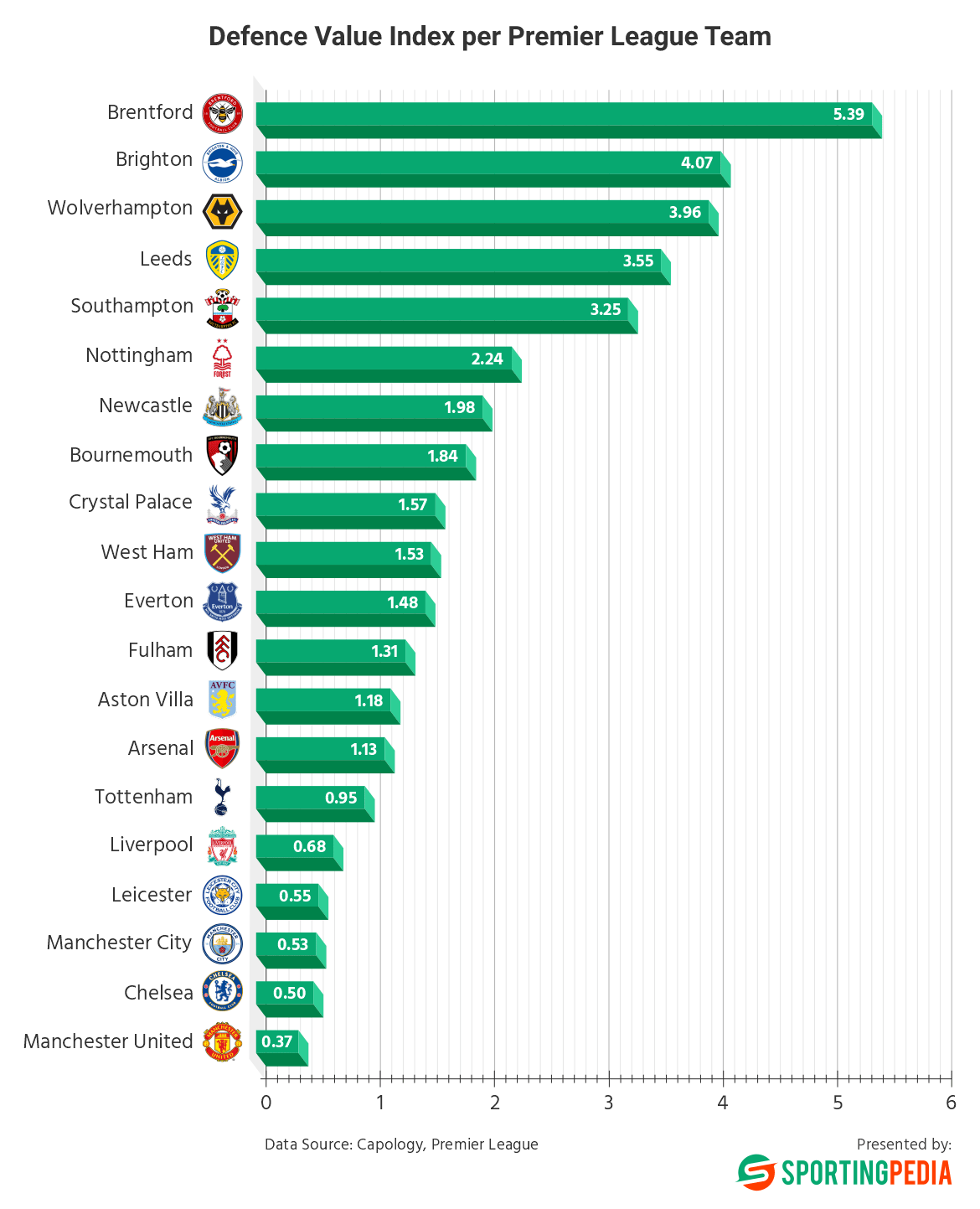 We also calculated this Weighted Defence Budget Index for the Premier League on average – £515,462 spent per team, multiplied by 1.4 goals conceded per match.

This way we had a benchmark to compare each team against the league average. We divided the league average by every team’s individual weighted defence budget index to calculate the ultimate Defence Value Index – the higher this is for a team, the better their defence performed based on the conceded goals and the money spent on defender wages.

Sir Alex Ferguson’s famous commentary: “Attack wins you games, defence wins you titles” prompted the SportingPedia’s editorial team to look into the wage budget each of the 20 Premier League teams has put aside for defence.

Chelsea is the team with the biggest budget for defenders’ salaries this season, as there has been a 46% rise compared to the previous campaign. Strangely enough, this coincides with the change in the London club’s ownership as Todd Boehly took over just before the summer transfer window. Besides Chelsea, there are two other Premier League teams, which pay their defenders more than £1 million weekly, with both of them being in Manchester.

On the contrary, Brentford is the only EPL side to pay less than £100k per week to their defenders.

Looking at the wage numbers was interesting, but we felt as though the report was incomplete, so we decided to check how those defences were performing since the start of the season and how many goals per game they concede.

Only one team has managed to concede less than 1.0 goal per match. Given the money invested, we expected to find Chelsea here, but the Blues from London did not make the cut. The best performing defence so far this season has been the one of Newcastle, which conceded 0.8 goals per game.

One of the most interesting findings of the research is that Brentford’s DVI (Defence Value Index) is almost 15 times higher than that of Manchester United.

Four of the 20 EPL teams conceded 2 or more goals per game, but none of them is among the 3 teams, which pay the least amount to defenders.

« Most influential female football players and how much they make per Instagram post
Tech companies dominate the NBA sponsorship roster for season 2022-23 »
SportingPedia covers the latest news and predictions in the sports industry. Here you can also find extensive guides for betting on Soccer, NFL, NBA, NHL, Tennis, Horses as well as reviews of the most trusted betting sites.
Sports Industry Reports and Analyses 66