As one of the four major sports leagues in the US, the National Basketball Association (NBA) generated a record $1.6 billion in sponsorship revenue during the previous season, ranking third behind the MLB ($1.7 billion) and the NFL ($1.8 billion). Companies from the crypto and technology sectors were the main drivers of sponsorship revenue last year.

Since the new season tipped off on October 18, the analyst team at SportingPedia decided to look into the 2022-23 sponsors to see whether there has been a shift in league-level sponsorships from crypto and technology to other industries. To this end, we drew up a list of the current season’s partnerships and sorted them by industry.

Companies from the software and technology sector continue to dominate the league’s sponsorship roster during the 2022-23 season. 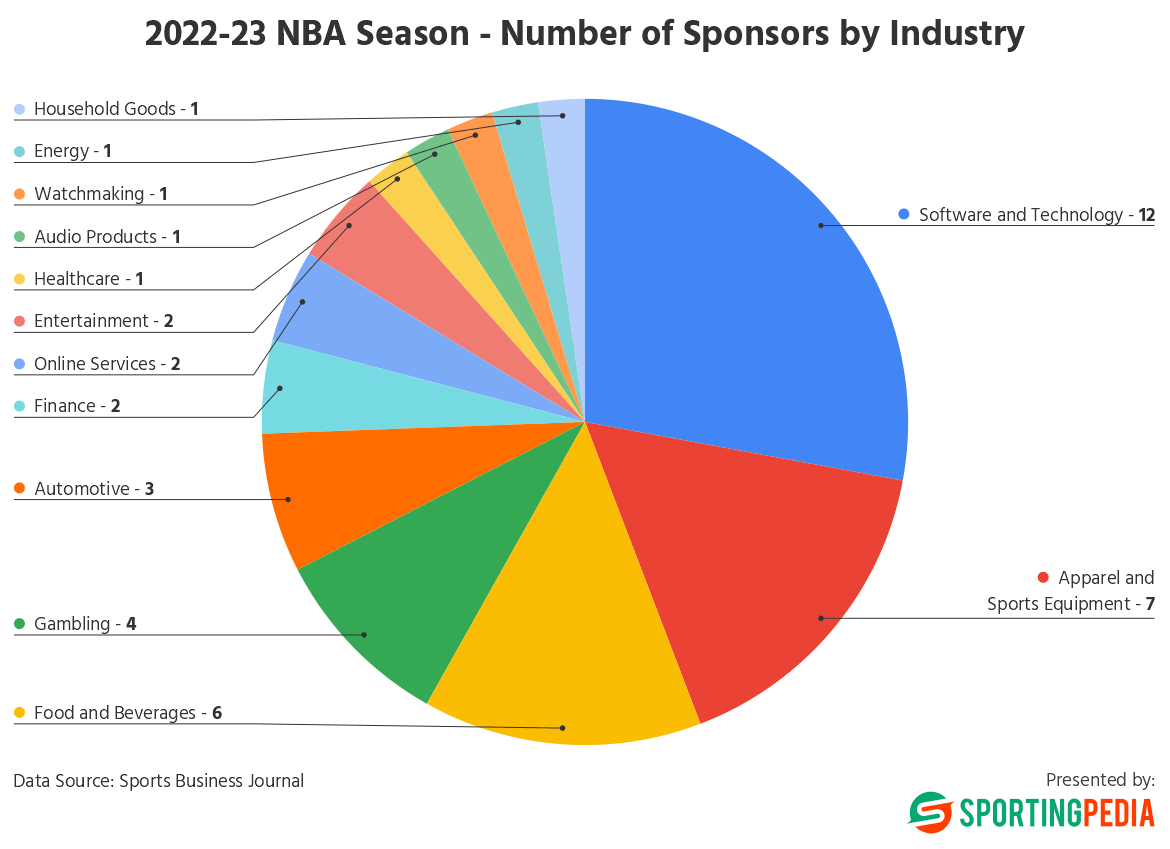 Approximately a quarter of this season’s sponsors come from the software, technology, and fintech industries, with Microsoft, Oculus, and Sony serving as prime examples. The professional basketball league expanded its range of tech sponsors for the new season with valuable additions like LegalZoom, Google Pixel, and Coinbase.

Sponsors from the Apparel and Sports Gear Industry

Apparel and sports equipment companies comprise the second most dominant category of sponsors during the new season. On a league level, the NBA has secured partnership deals with seven major brands from the apparel and fashion industry, including Louis Vuitton, Nike, Puma, 2K Sports, New Era, and Under Armor. The league terminated its long-standing partnership with Spalding last year as the two parties failed to renegotiate mutually beneficial terms. But every end is a new beginning, as they say. After parting ways with Spalding, the NBA found a new partner in the face of Wilson. The prominent sports apparel and gear brand will provide the official game balls during the 2022-23 season.

Sponsors from the Food and Beverage Industry

Companies from the food and beverage industry comprise the third largest group of NBA sponsors this season, with notable representatives like Gatorade, Moet Hennessy, Pepsi, and Taco Bell.

Sponsors from the Gambling Industry

The new season will see four sponsors from the gambling industry on a league level, namely FanDuel, DraftKings, BetMGM, and Caesars Sports. All four have multi-year deals with the league, with FanDuel’s partnership dating to 2014.

Sponsors from the Automotive Industry

Companies from the automotive industry, like CarMax and Kumho Tires, constitute the fifth largest category of NBA sponsors this season. Kia Motors is among the league’s longest-tenured sponsors. It has been a presenting partner for the NBA Tip-Off since the 2008/2009 season.

Sponsors from Other Industries

NBA Sponsorship Revenue Has Tripled over the Last Decade 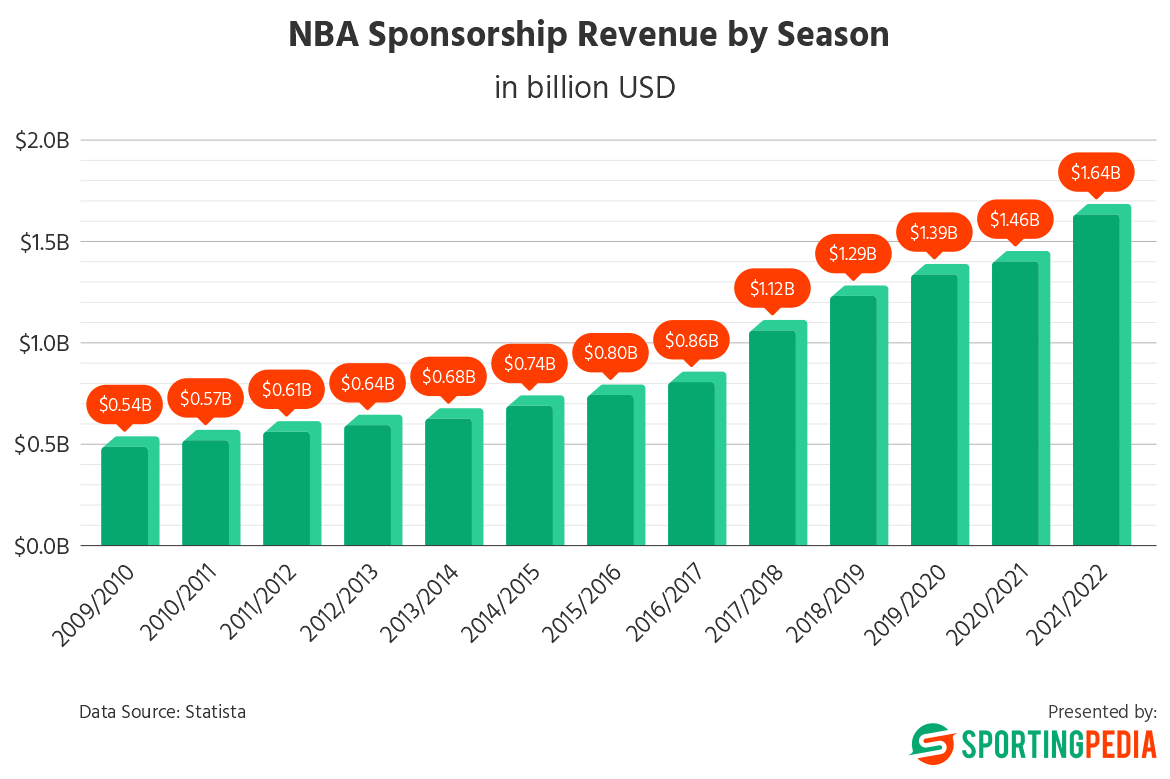 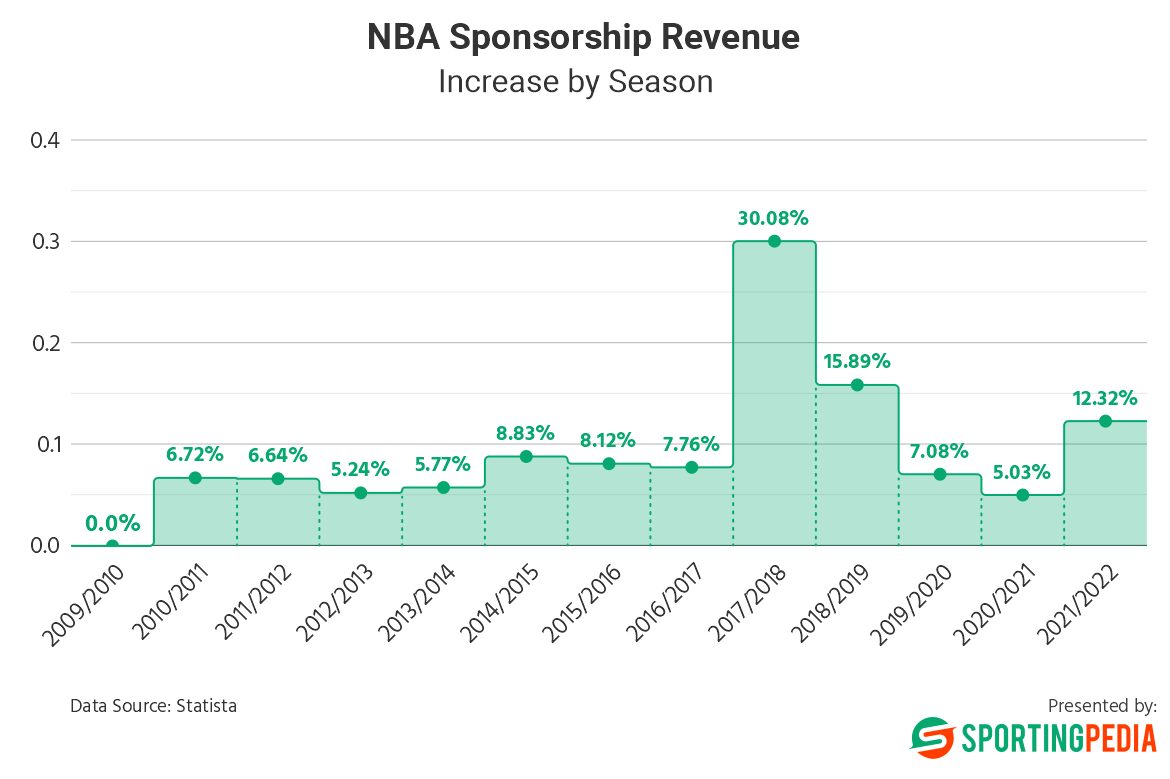 The statistical data we analyzed indicates the revenue the professional basketball league generates from partnership deals has more than tripled over the last decade. The data we obtained goes all the way back to the 2009/2010 season when the league collected a little over half a billion from sponsorships. The upward trend is impossible to deny as sponsorship earnings have been slowly but steadily increasing since then.

The increase was consistent during the next seven seasons when the annual growth in the league’s sponsorship revenue fluctuated between 6.72% and 8.83%. The most pronounced rise took place during the 2017/2018 season when sponsorship revenue inflated by 30% compared to the previous year. This is when the NBA passed the one-billion mark and collected $259 million more than it did during the 2016/2017 season. The tendency continued well into the following years, with sponsorship revenue peaking at $1.64 billion in the 2021-22 season. This is up 12% from the $1.46 billion the NBA collected during the previous season, which is still impressive considering the negative impact of the coronavirus pandemic.

All in all, the league’s earnings from partnership deals have increased by a whopping 206% over the last decade.

« Manchester United has the worst value for money defence in EPL this season
Survey reveals Americans' preferences and foods of choice while watching sports »
SportingPedia covers the latest news and predictions in the sports industry. Here you can also find extensive guides for betting on Soccer, NFL, NBA, NHL, Tennis, Horses as well as reviews of the most trusted betting sites.
Sports Industry Reports and Analyses 66