Watching sports is a favorite pastime for many Americans and in the past decades the social aspect of it has become more important than the game itself for many. Whether it would be a competition between school teams or a major sports event such as the Olympics or the Super Bowl – people love to watch sports together. A new survey shows that most people in the U.S. gather with family and friends to watch sports, and at the same time, socialize and eat good food.

An online poll conducted by SportingPedia asked 2,897 fans how and why they watched sports and some of the answers were quite surprising. For instance, the majority of sports fans say they usually watch their favorite games at home, eating chicken wings, chips and dip, and tacos. Beer and soda come up as the most preferred drinks, on the other hand, while very few combine watching sports with drinking stronger spirits. Moreover, the most common reason for attending a sports game-related party is to simply socialize rather than watch the game itself.

The team at SportingPedia surveyed 2,897 people from October 18 to November 10 this year, asking a total of ten questions. The poll was conducted online, with respondents selecting their gender, age group, and ethnicity. According to their answers, they were divided into the following groups:

For some of the questions, respondents were able to choose more than one answer.

Chicken Wings Named the Most Preferred Snack for Sports Fans

Food is an important part of every sports game-related party and for U.S. adults, the most preferred type of snack is chicken wings, with nearly 22.5 percent of respondents choosing this option. Three answers were available for this question and the other most common one was chips and dip, which was selected by roughly 19.6 percent of the people. The third most popular snack was tacos (12.9%), followed by pizza (12.4%), mozzarella sticks (8.5%), and chicken bites (7.1%). 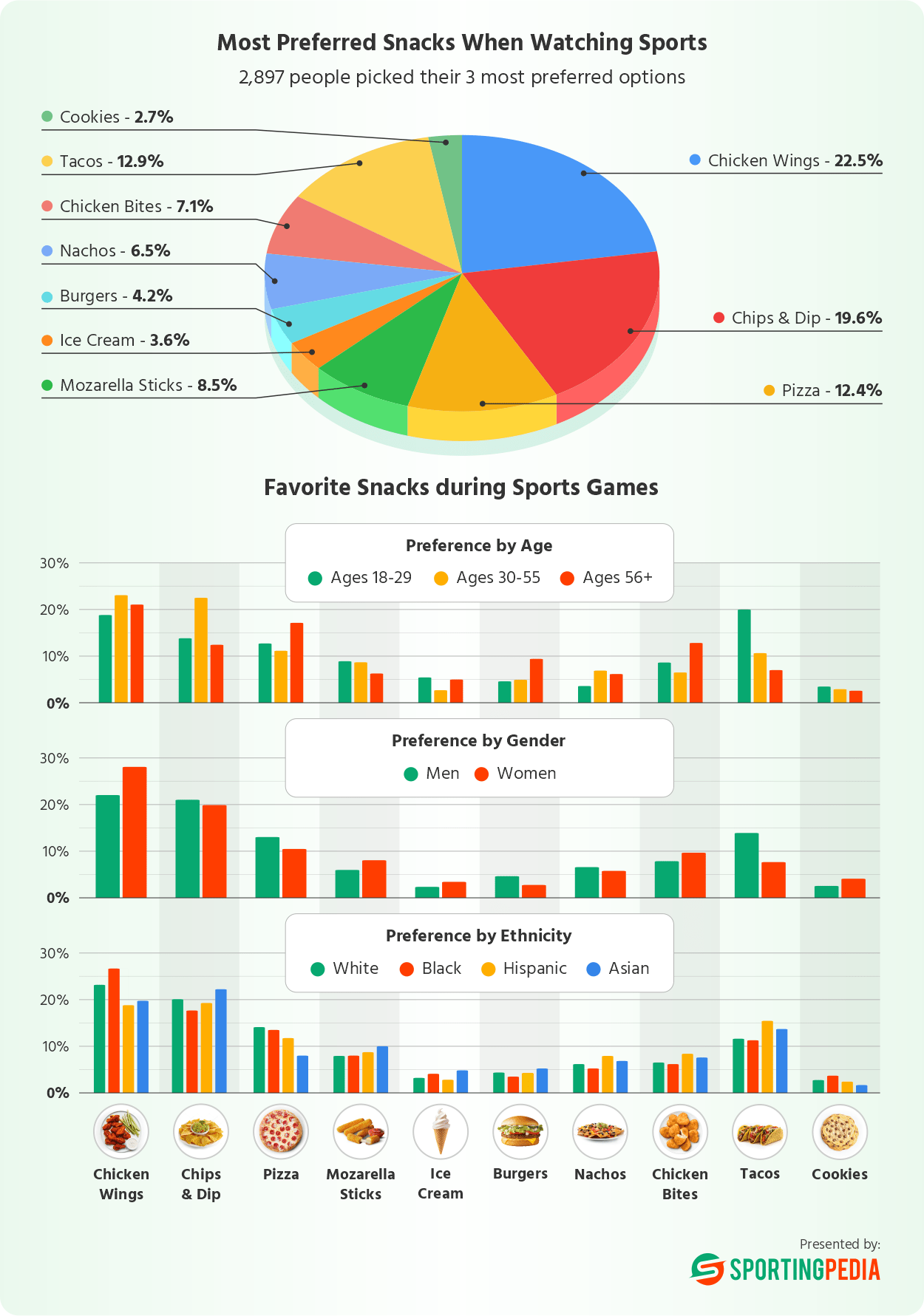 Looking at the demographics, there are not many huge differences in people’s preferences when it comes to the types of snacks. Chicken wings topped the list for men (22.1%), while this option was even more popular among women – 28.1 percent of their answers were chicken wings. This was a favourite choice for nearly 27 percent of black respondents and 23.2 percent of white people. One notable exception is the top choice of Asian and Hispanic people – it’s chips and dip for 22.3 percent of those identifying as Asian and for 19.3 percent of Hispanics.

Most People Drink Soda or Beer when Watching Sports

When asked about their preferred drink when watching sports, most people seem to prefer drinking soda to beer. Only one answer could be chosen here and the top responses were soda (42%) and beer (35%), followed by iced tea (12%), wine (6%), and whiskey (5%). 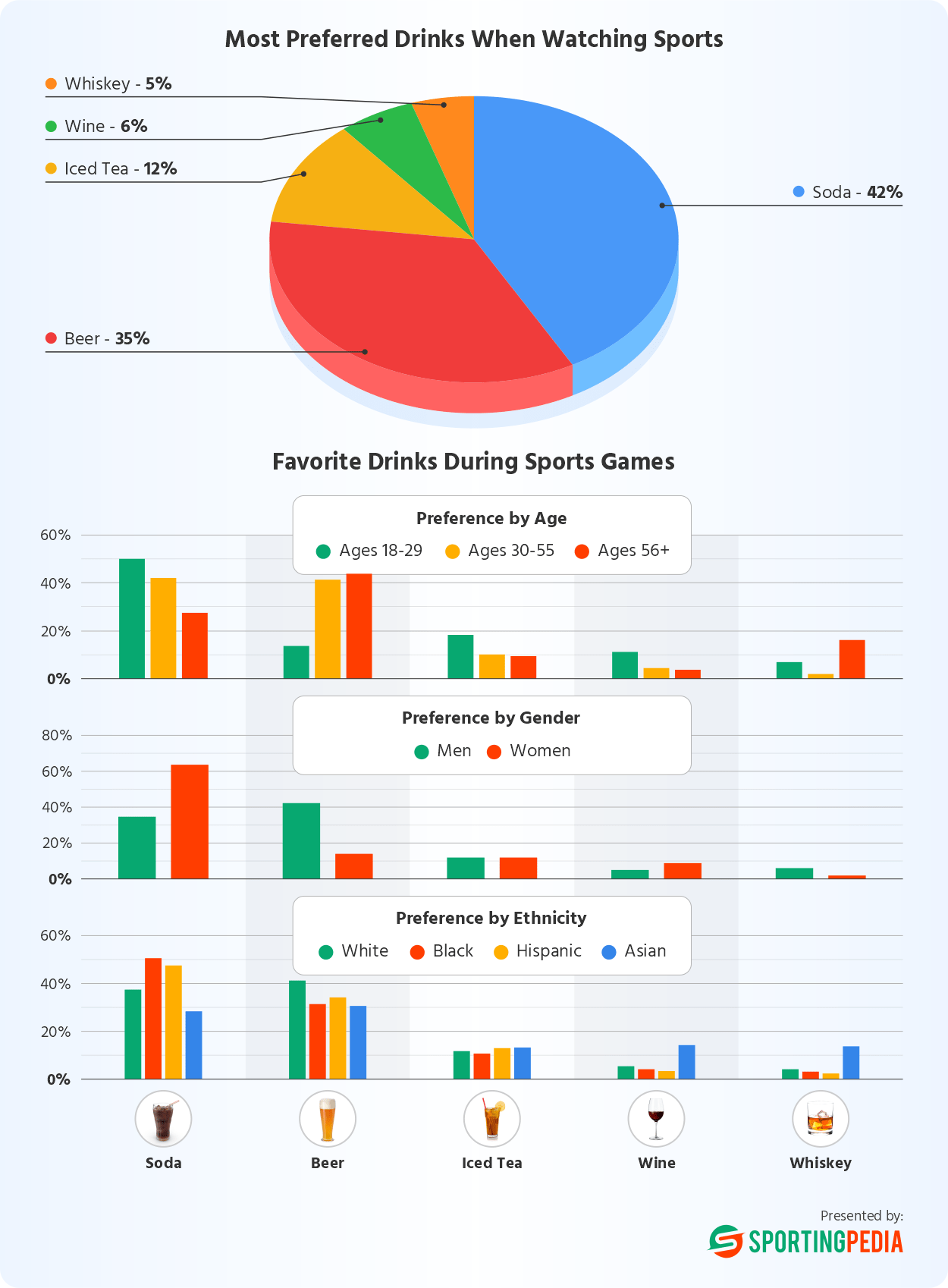 Big sports event such as the Super Bowl, the NBA finals or the baseball World Series attract millions in front of TVs and often, fans gather to watch their favourite club or athlete or the national team together. When asked how do they watch big sports events, nearly half of all respondents or 1,364 people said they preferred family gatherings with their parents, siblings and children. Another 947 or nearly 33 percent said they usually attended the so-called potluck parties where everyone brings food and drinks to share with their friends.

Roughly 10 percent of respondents said they preferred watching the game with other devoted sports fans and were not really interested in the food, drinks or anything else besides what they were watching. Another 7 percent of people said they attended tailgate parties, while only 3 percent bought tickets and actually attended the game at the stadium. 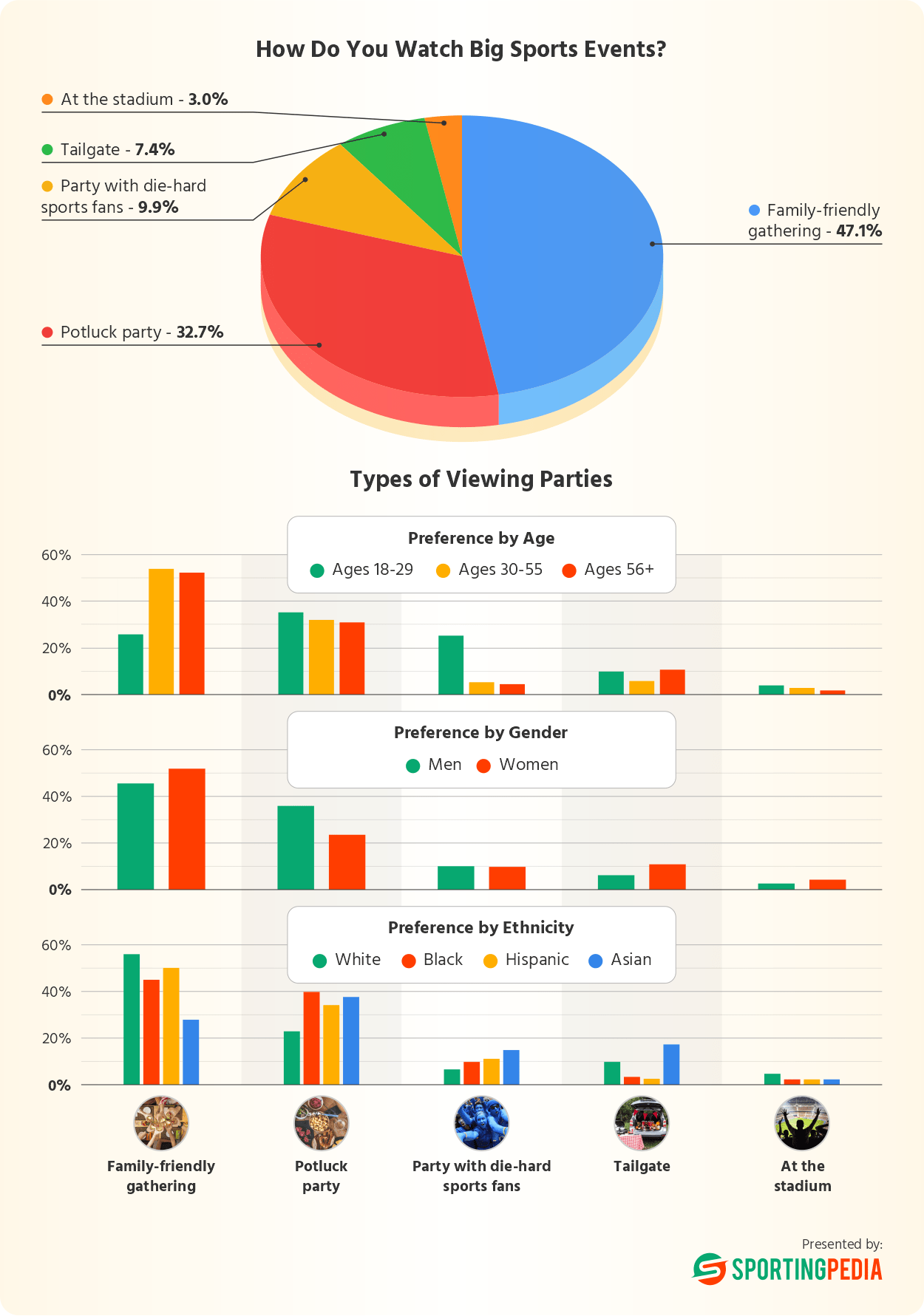 Super Bowl Is the Most Popular Sports Event

There is nothing more important to a sports fan than the final competition of the season where two or more of the best teams go head to head to decide who the champion will be. And the particular event varies largely across the globe. In this poll, respondents had to pick the most significant sports event and for most of them, this was the final of the NFL playoffs, better known as the Super Bowl. A little over 40 percent picked Super Bowl, while another 22 percent chose the NBA finals. 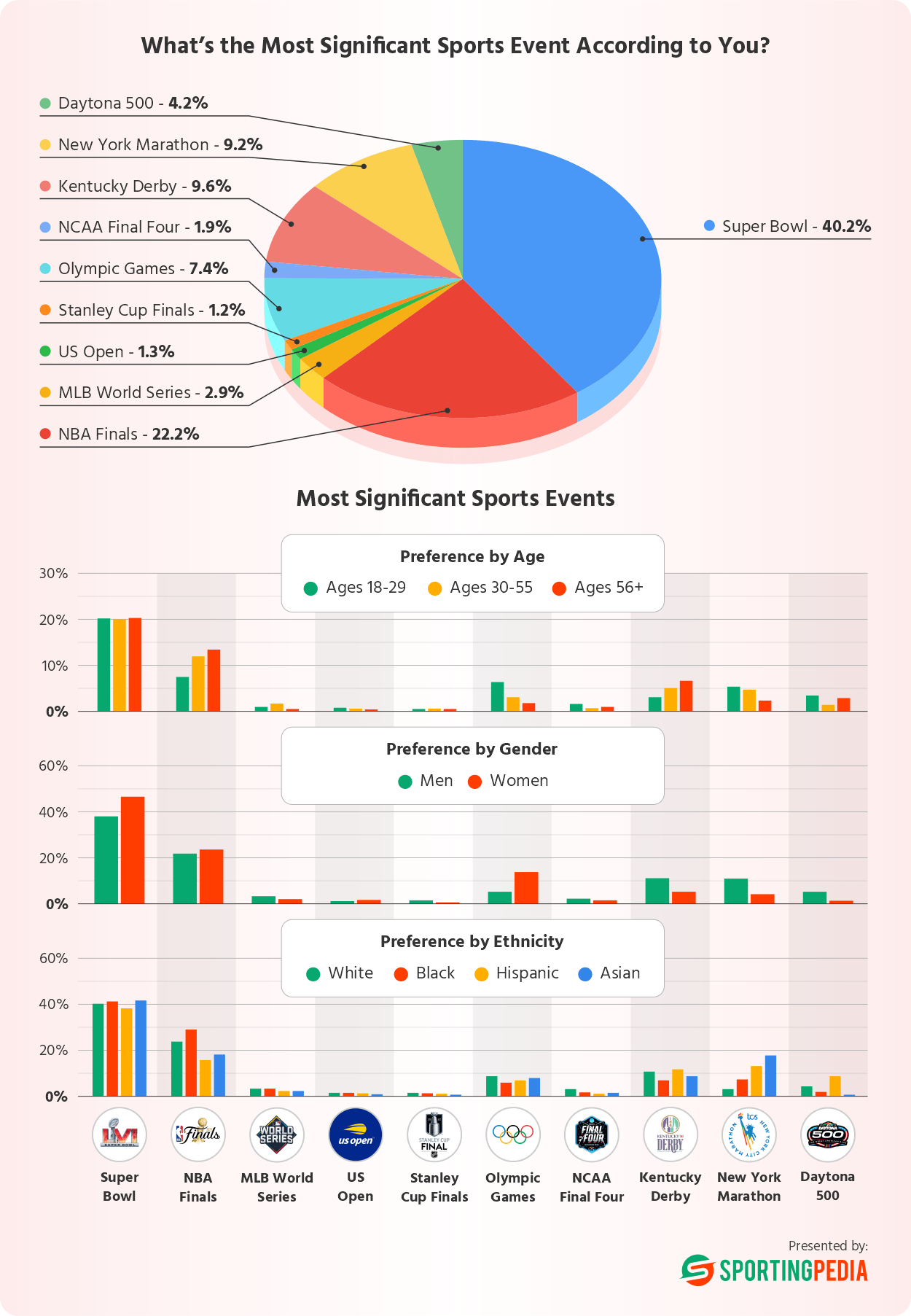 Interestingly, more people admit to attending a Super Bowl party in order to socialize than to watch the game itself. To the question “Why would you attend a Super Bowl party? What are your reasons?”, respondents could pick one out of five different answers. The most commonly selected option was “to socialize” – 1,129 people or nearly 39 percent gave this answer. A total of 775 people (27%) said their reason was to watch the actual game, while 685 people (24%) said they would attend such a gathering mainly for the food. Roughly 7.4 percent watch the event mainly for the halftime show and another 3.2 percent say they do so for the interesting and funny commercials.

Socializing was the main reason for more than half of all women or roughly 55 percent versus only 34 percent of men. Also, watching the game was the second most common answer among men – around 30 percent of them gather for the game itself, while only 19 percent of women share the same reason. Respondents aged 56 years and older admit their main reason for attending a Super Bowl party is the food – 37 percent of them watch the game for the delicious snacks rather than for being with family and friends (36%) or for the competition itself (20%). 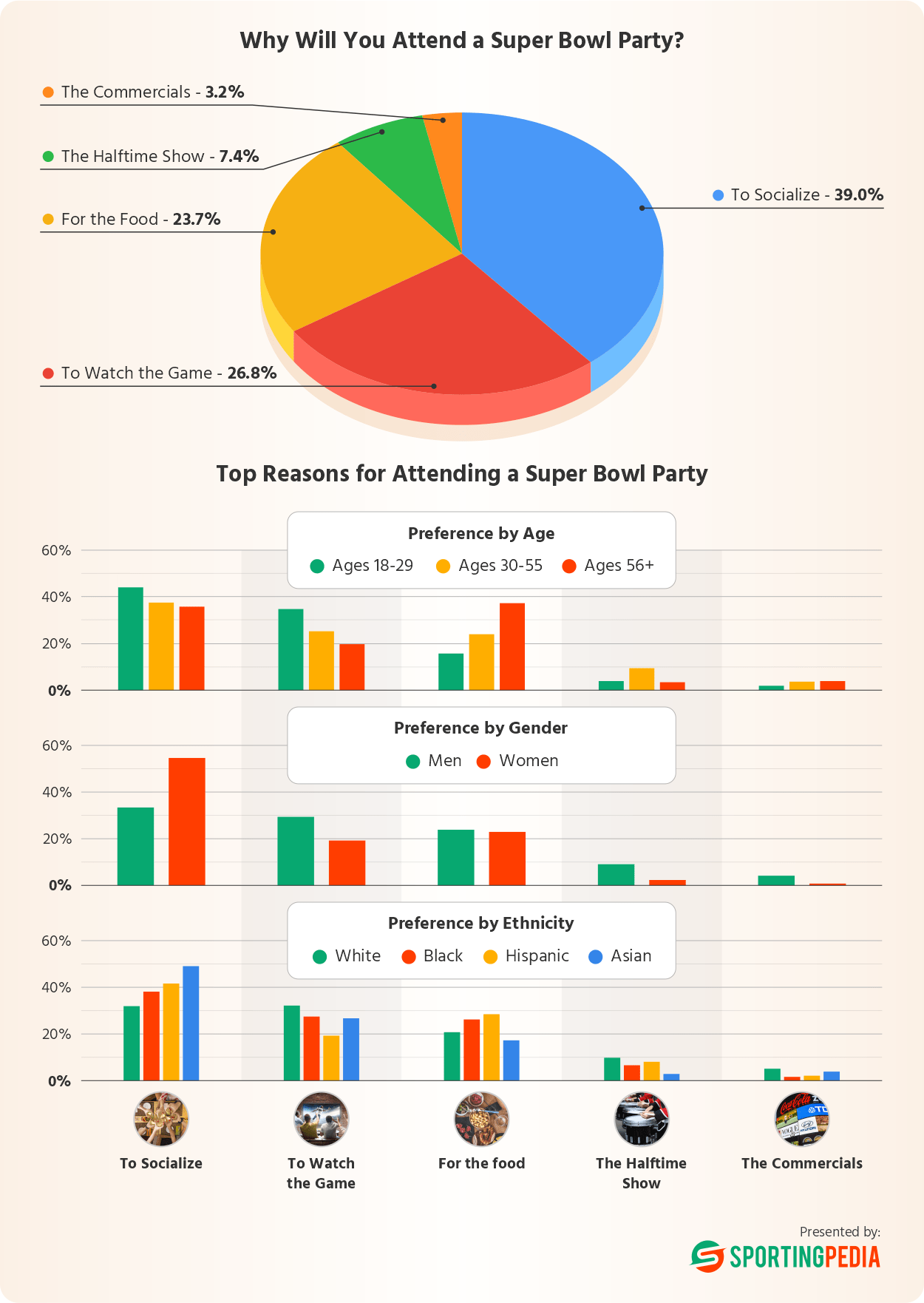 Football Fans Tend to Binge Eat and Drink the Most

Watching a football game always comes with excessive amounts of food and alcohol, at least according to the results of the survey. We asked respondents to specify the sport or league they are fans of – football (NFL), college football, soccer, baseball (MLB), basketball (NBA), hockey (NHL), MMA/boxing, NASCAR, horse racing, and darts. Then, they had to answer several questions, including “Do you binge eat and drink while watching sports?” 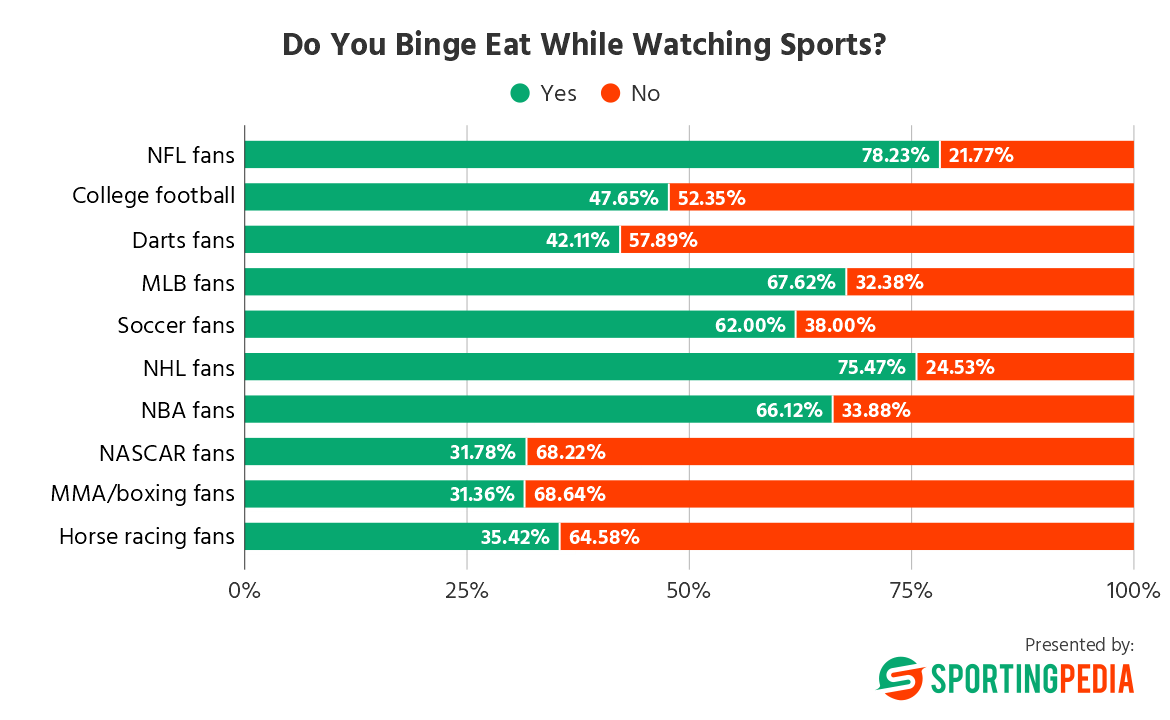 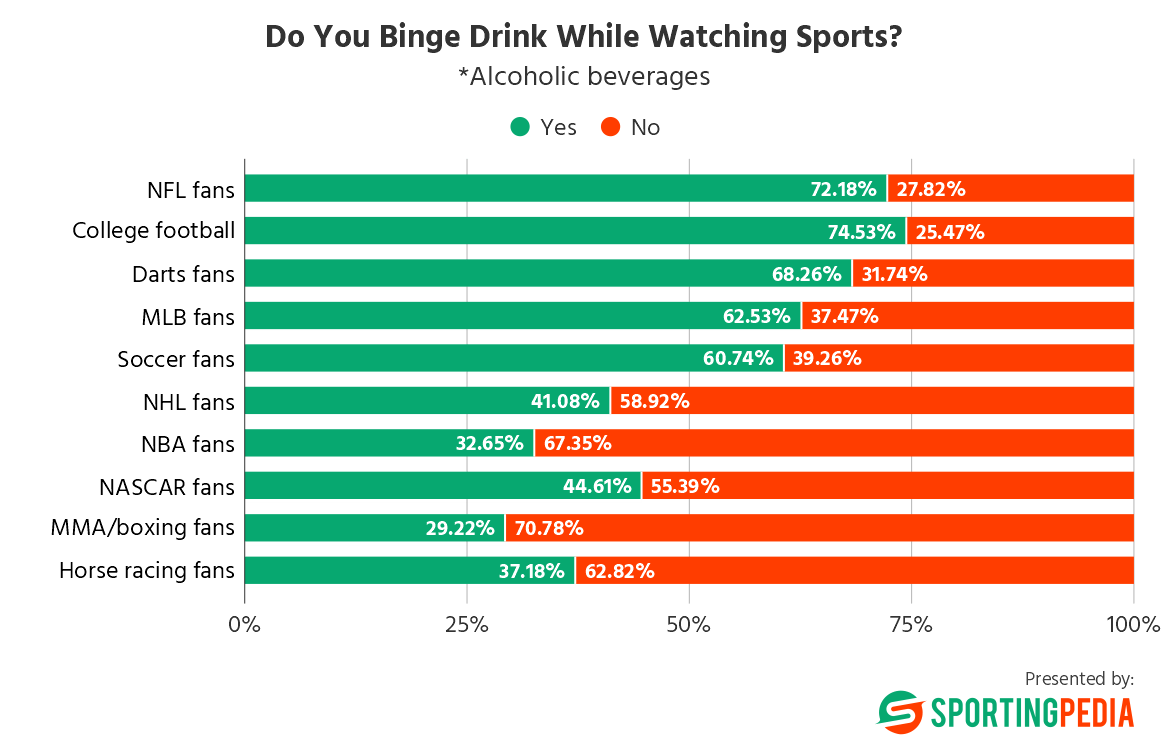 NBA Fans Eat More Pizza & Chicken Wings Than Anyone Else 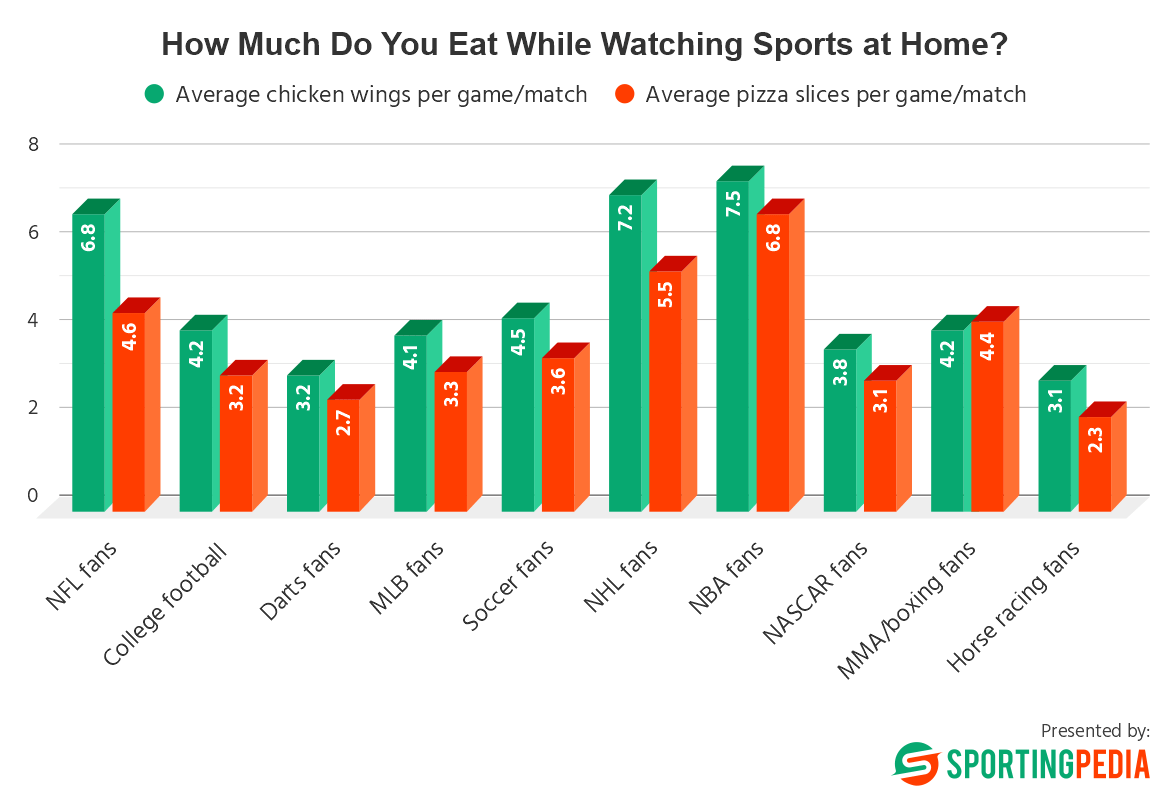 Football fans seem to be the heaviest drinkers of all sports fans in the survey, especially when it comes to beer, the most popular alcoholic beverage when watching sports at home. Topping the list are college football fans who drink an average of 6.3 beers per game, followed by NFL fans who consume an average of 6.1 beers. Coming up on third position with 5.4 beers per game on average are darts fans – after all, the modern sport of darts was invented in a bar. 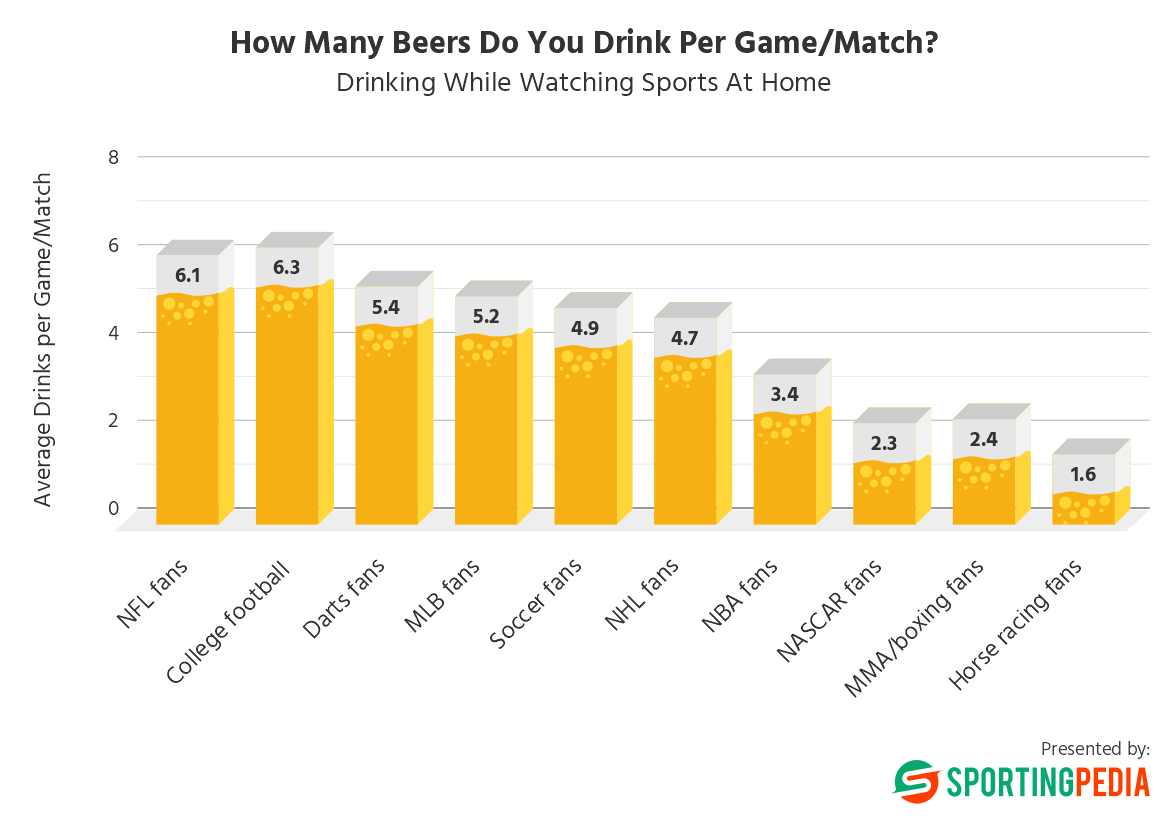 NFL and NBA Fans Spend the Most on Snacks & Drinks

We all know how expensive being a dedicated sports fan could be – purchasing official merchandise, buying tickets for every single game your team plays, travelling out of town to support your team, etc. However, watching sports at home can also be quite pricey – up to almost $100 per game, according to the survey. We asked sports fans how much they usually spent on snacks and drinks that they would consume while watching a game at home.

Surprisingly, NFL fans spend the most – $97.50 per game on average. Note that this is the money spent per person, rather than the total cost of all foods and drinks people could be purchasing for their guests, for instance. This means that people tend to buy several types of snacks and beverages when planning to watch their favorite sport at home. NBA fans also spend a lot – $92.57 per game on average, followed by NHL fans ($82.62) and MLB fans ($79.53). 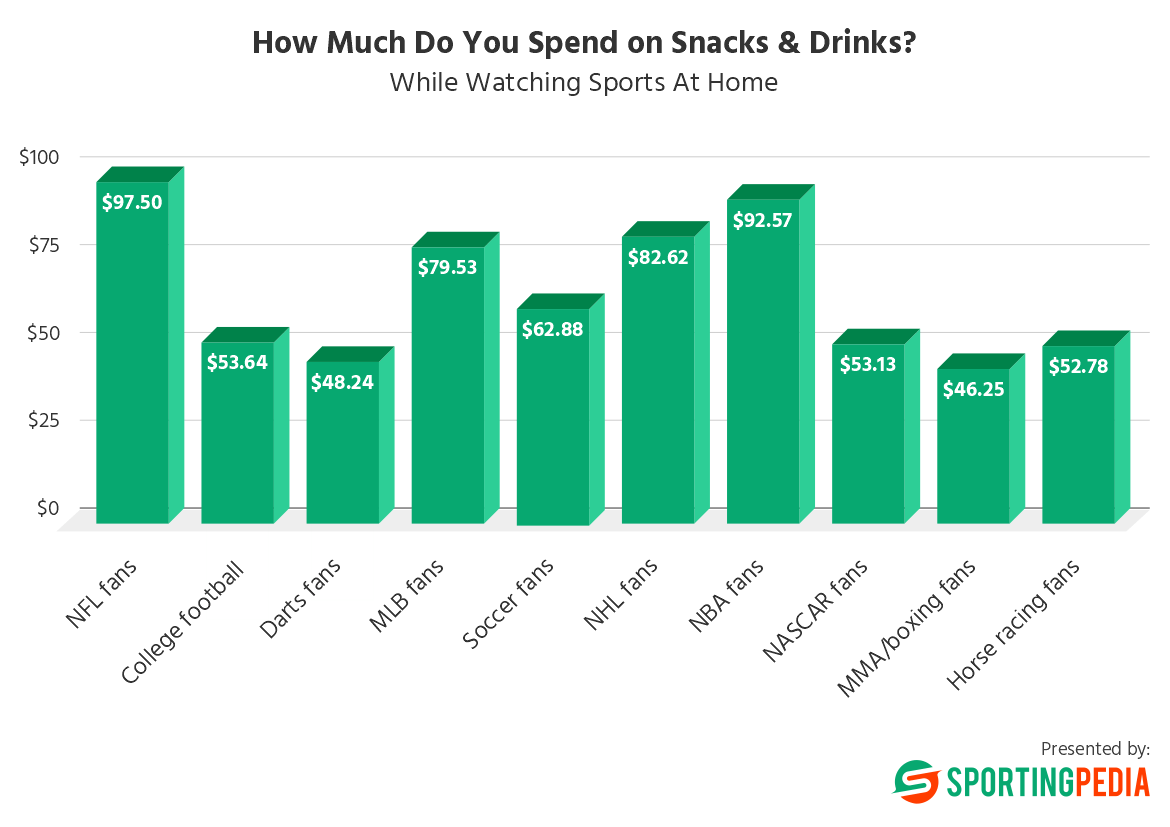 Some sports fans believe that a certain item will help their favorite team win an important game. Items such as a rabbit’s foot, a four-leaf clover, or a horseshoe are widely believed to bring good luck to those who carry them but they may also help your team score a victory. The most superstitious sports fans are those of horse racing – a shocking 63.26% of them believe a lucky charm will help their preferred horse or jockey.

The majority of fans of other sports, however, say they do not believe in the power of lucky charms. Still, 46.86% of MLB fans, as well as 43.24% of darts fans say they use such an item to help their favorite team or player win. 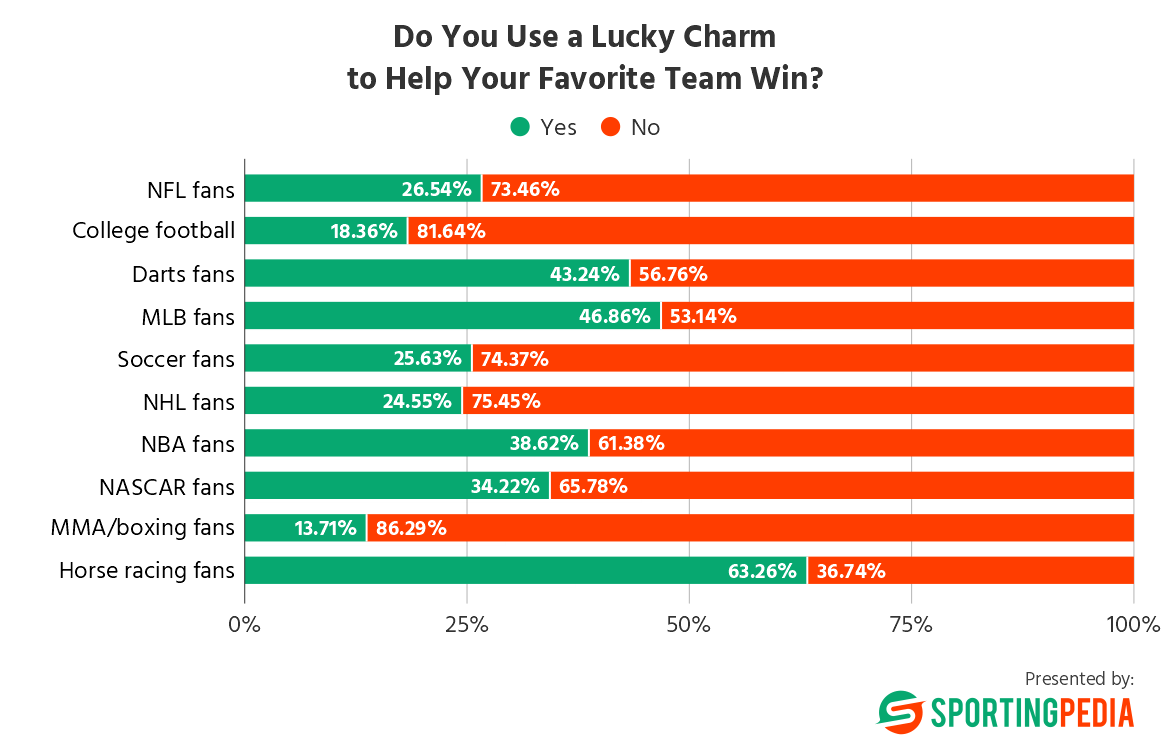 « Tech companies dominate the NBA sponsorship roster for season 2022-23
Survey reveals how satisfied British football fans are with their experience at the stadium »
SportingPedia covers the latest news and predictions in the sports industry. Here you can also find extensive guides for betting on Soccer, NFL, NBA, NHL, Tennis, Horses as well as reviews of the most trusted betting sites.
Sports Industry Reports and Analyses 66