The English Football League was founded way back in 1888 and existed under that name until 1992. Then everything changed and the top tier in England became known as the Premier League. With its financial power, the EPL has attracted some of the most famous players to compete in the league. The teams offer their players higher wages compared to any other football league, but how do the clubs treat their supporters? Each week most of us watch the beautiful game on TV, but what do we know about the live experience of fans who are up there with their teams, supporting them from the stands?

How many times have you heard during the post-match interview that а player dedicates the victory to the team’s supporters? A lot, right? Of course, victory, for the die-hard fans, is the most important aspect of a football match f, but that is not always the case when we take into perspective the whole experience of attending a football match. All the small details fall under the spotlight when your team is about to have a big game and even the tiniest mistake can lead to a backlash from the fans.

SportingPedia surveyed 2,000 football fans across England to find out which team’s supporters are most satisfied during match-days. In football the most important aspect from a fans’ point of view is the outcome of their team’s game, but we moderated our questions in a way that prioritises their personal match-day experience.

We asked 100 supporters of each of the 20 Premier League clubs to rank the venue of their beloved team in 8 different categories – infrastructure, atmosphere, safety, food, visibility, accessibility, parking spaces and cleanliness on a grading system of 1 to 5.

1. How would you rate the access to the venue of your team via public transport on match-days? (Location) 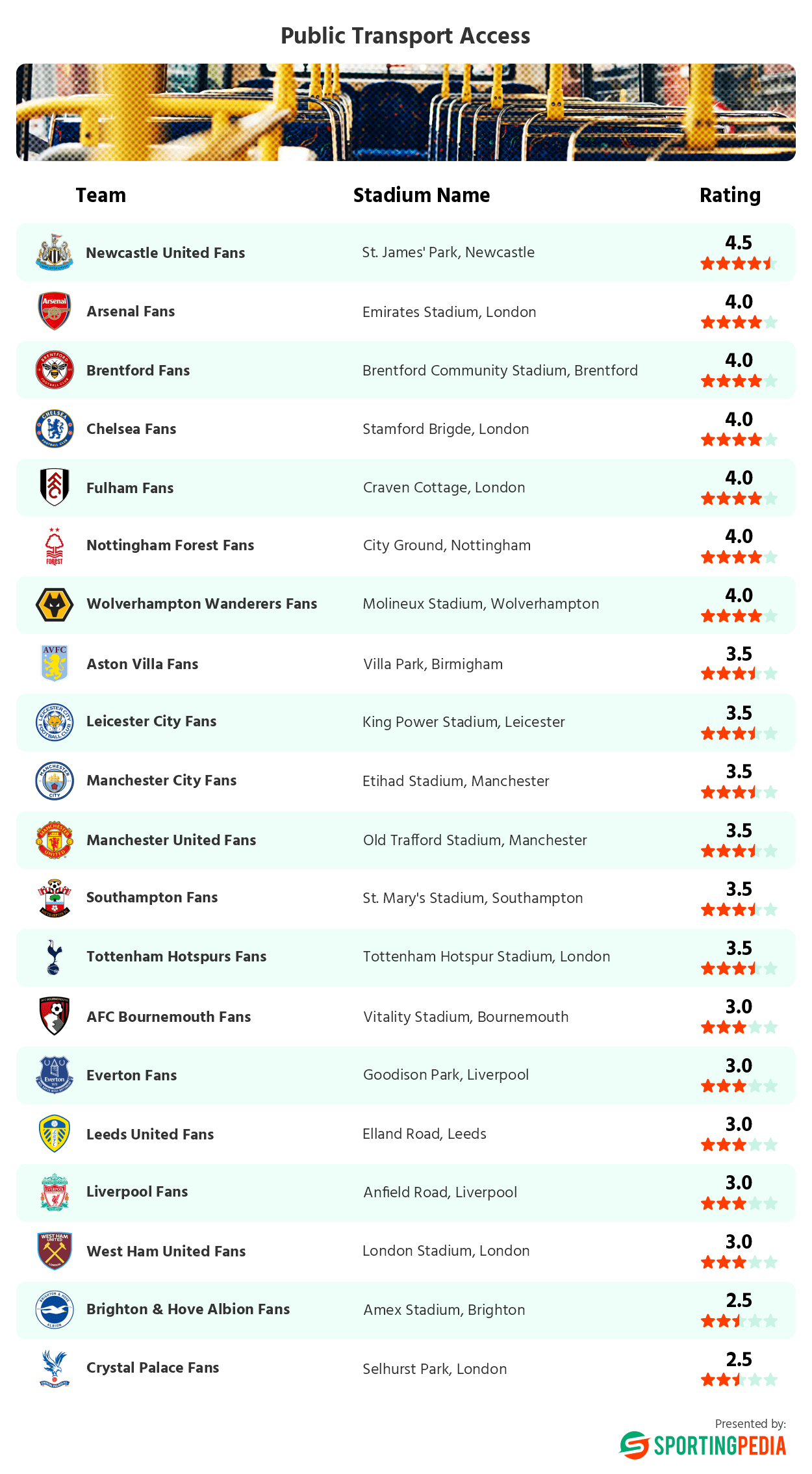 We were surprised to find out that Newcastle’s supporters have the easiest access to the stadium via public transport on Premier League match-days. The fans of Nottingham and Arsenal also find it easy to get to the venue, however, based on the answers we have received, fans of Brighton and Crystal Palace struggle with transportation to stadiums. Selhurst Park is located on the outskirts of London, and even though the venue is surrounded by 3 stations, each within a short walking distance, the fans find it hard to get to the main area of the city. On the opposite side of the spectrum, Newcastle fans were very happy with the easy access to their venue, with one saying “Out-of-town stadiums are a nightmare for fans. St James’ Park is beautiful, and we should appreciate what we have.”

2. What rating does the parking lot around the stadium deserve? Are there enough parking spaces for all fans who are coming by car ? (Parking Lot) 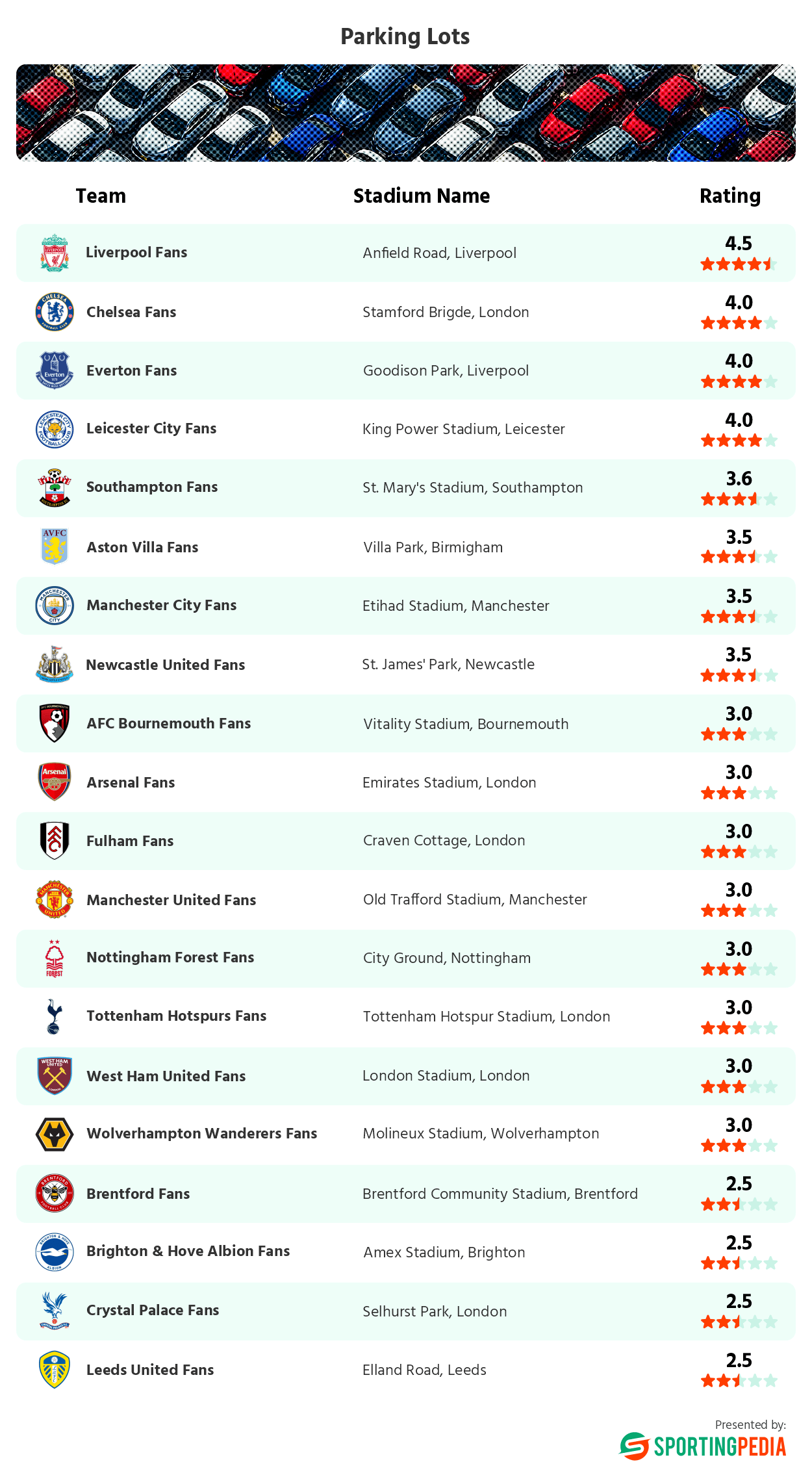 Football fans who want to visit a PL game using their own car instead of public transport found it most convenient to park in Liverpool. Both teams from that city – Liverpool and Everton received high scores for the parking spaces around their grounds. Crystal Palace, Leeds, Brentford and Brighton were on the opposite end of the rankings. The Eagles have informed their supporters that there is no public parking near Selhurst Park, advising fans to use public transport. Liverpool led the pack in terms of match-day parking options, with 17 parking areas located within a one-mile radius of Anfield. They were followed by Everton, Leicester City, and Chelsea, who have 15, 13, and 13 car parks near their stadiums, respectively.

3. Are you happy with the infrastructure around the venue? 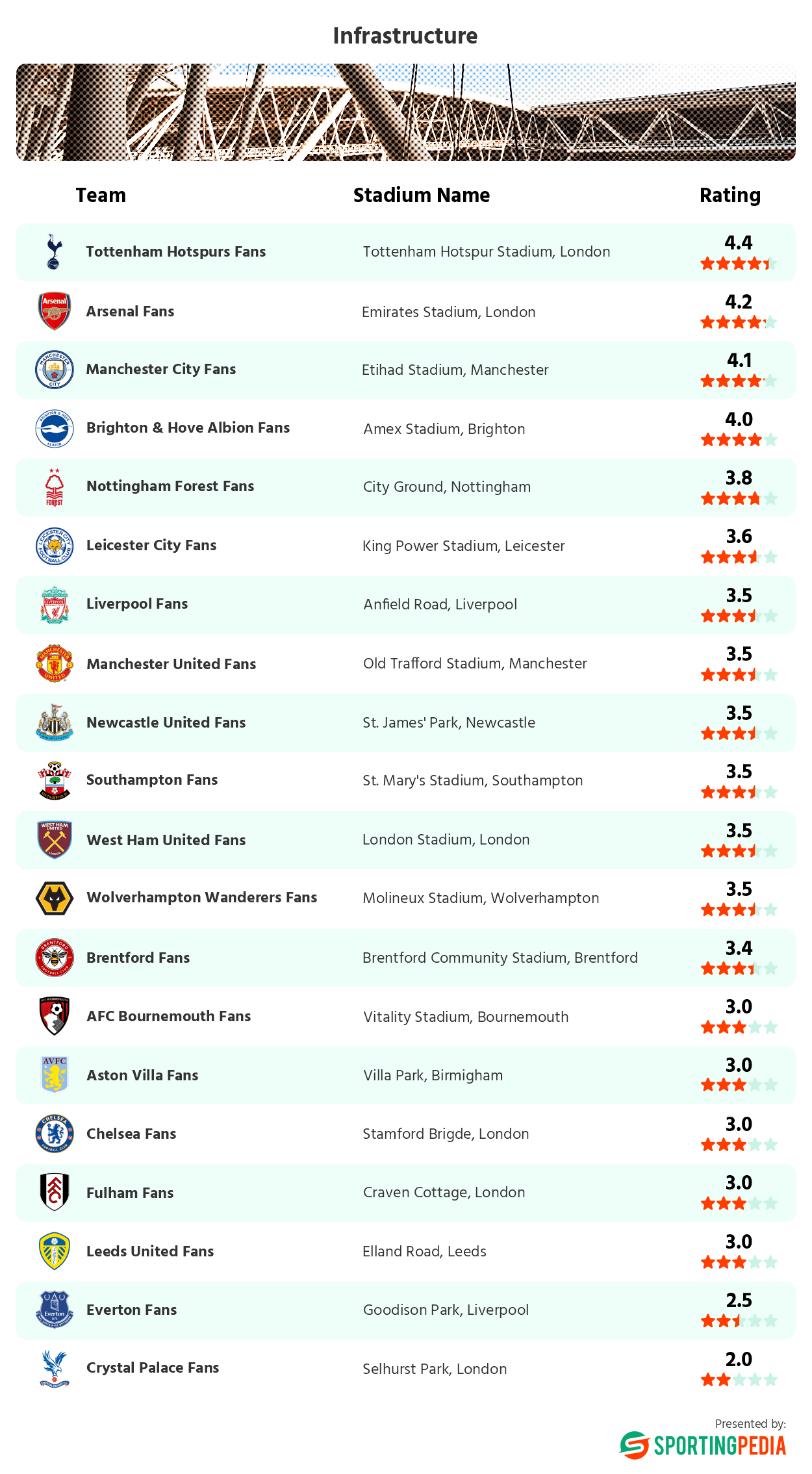 Out of all survey participants, Tottenham’s supporters voted with the highest marks. The Spurs’ new ground gets the highest score for infrastructure of all Premier League teams. The fans of Arsenal, Manchester City and Brighton also approved of how their venues were planned and built. That cannot be said for the Everton and Crystal Palace fans, as based on the results, they obviously did not like how the area was constructed. The board of Everton is well acquainted with the problems surrounding Goodison Park and is planning to build a new ground for the Toffees. Only time will tell whether it will be as good as Tottenham’s, whose fans absolutely loved how the area around the Tottenham Hotspur Stadium was constructed.

4. How clean do you find the venue? Around the seats, stairs, stadium entrances, toilets? 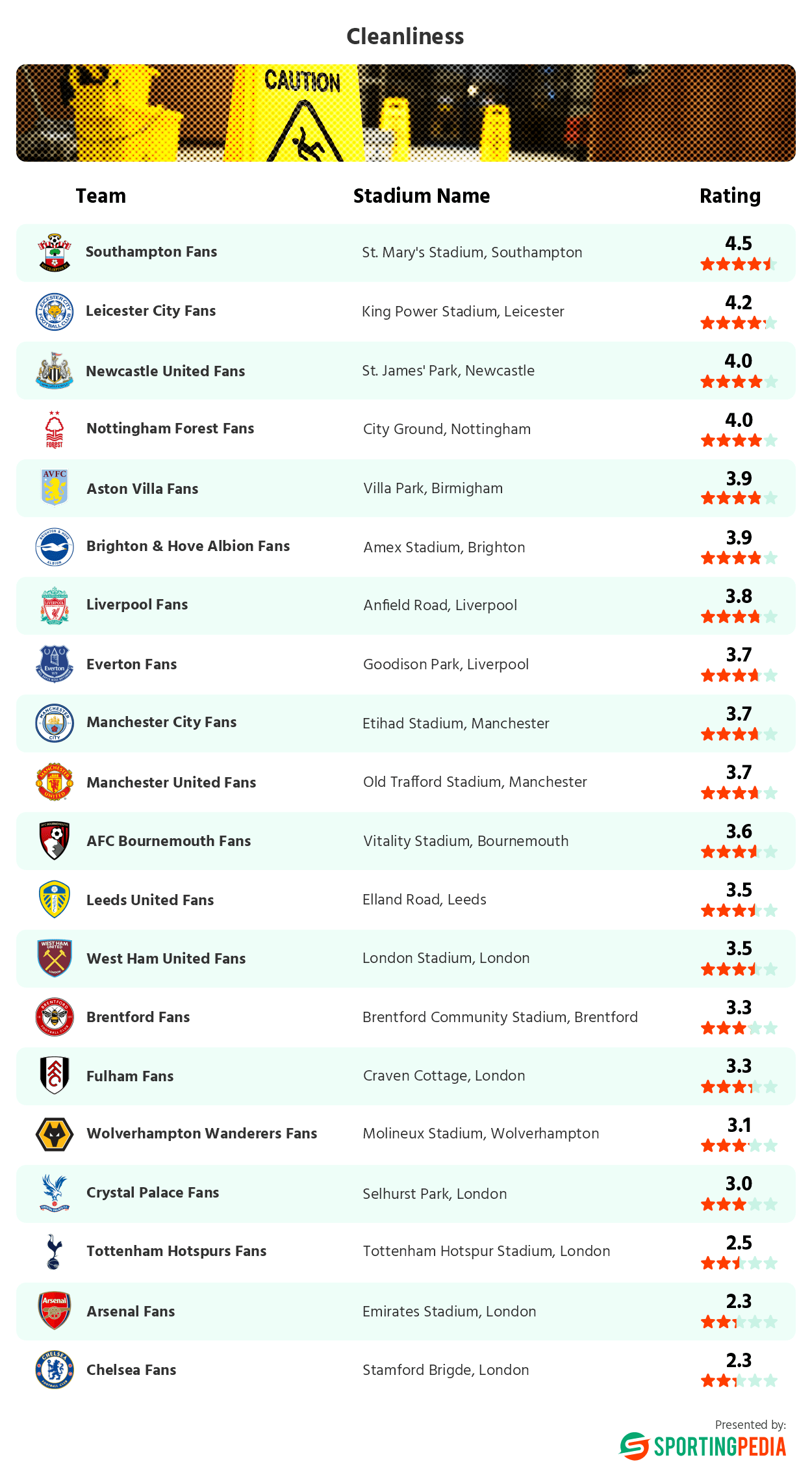 When it comes to cleanliness or pollution, the Southampton supporters are the happiest. They gave St. Mary’s Stadium an average rating of 4.5* for cleanliness, while the dirtiest Premier League venues, according to fans, were those of Arsenal and Chelsea. All of the bottom four teams are located in London. Even though it was given 3.7* by the fans, Manchester United’s Old Trafford had become the Premier League’s first venue to receive the Ecolab Science Certified seal for cleanliness, ensuring that fans, staff, and players are in a clean environment.

5. How would you rank the quality and price of food and beverages offered at the stadium? 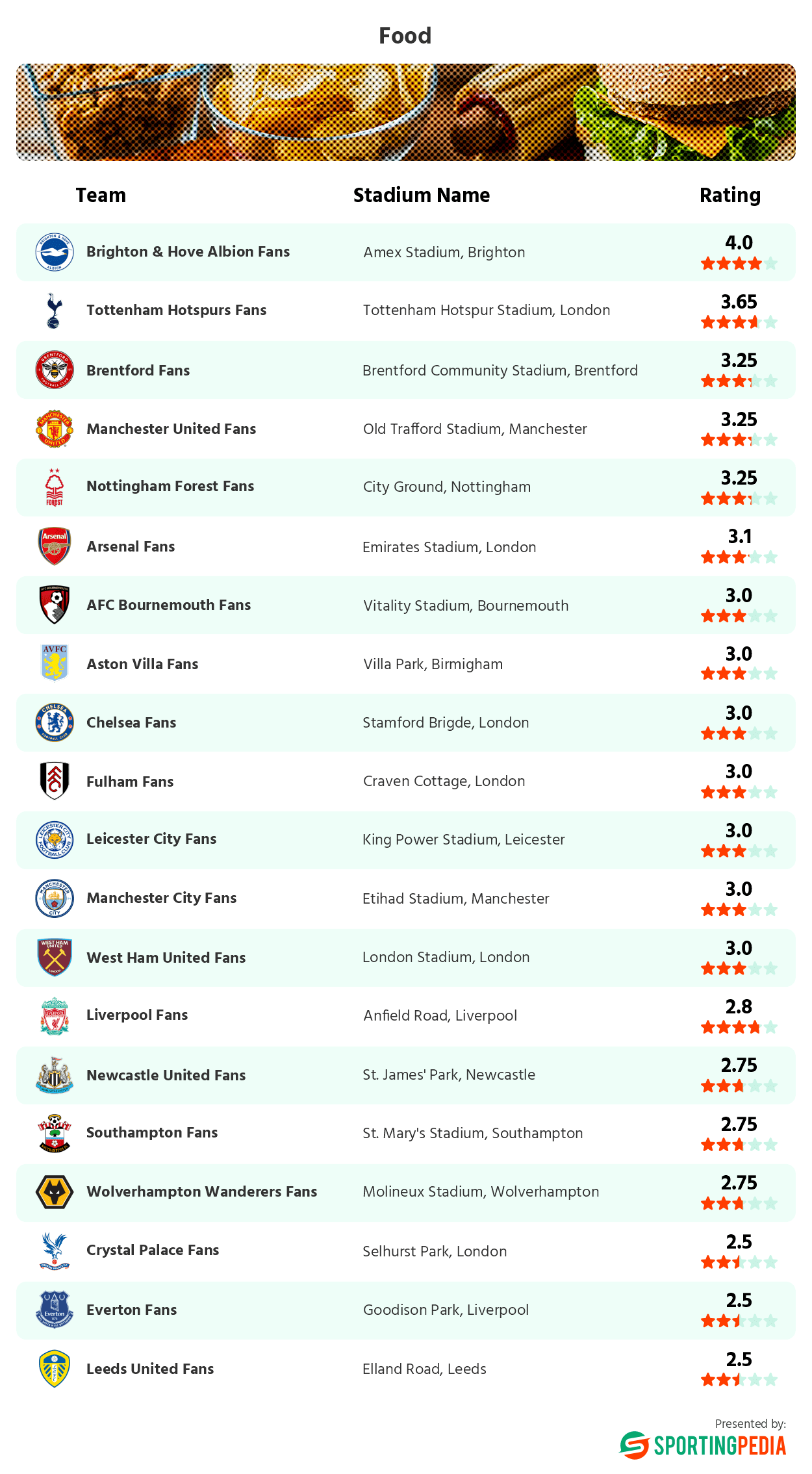 It looks like the best beers and pies of the Premier League are situated at Brighton’s AMEX Stadium, as the Seagull fans registered the highest score when it comes to evaluating the F&B sector. Those of Tottenham came 2nd, and understandably so, as the Tottenham Hotspur Stadium has its very own microbrewery on offer! Once again, we find Crystal Palace’s fans to be dissatisfied with what is offered at Selhurst Park. Here is what one unhappy Palace fan had to say: “Never buy a burger from the upper Holmesdale. Once forgiven and now again today. Absolutely disgusting undercooked meat”. Оthers least satisfied by the F&B offerings during EPL match-days are the supporters of Leeds and Everton.

6. How would you rate the atmosphere within the stadium on match days? 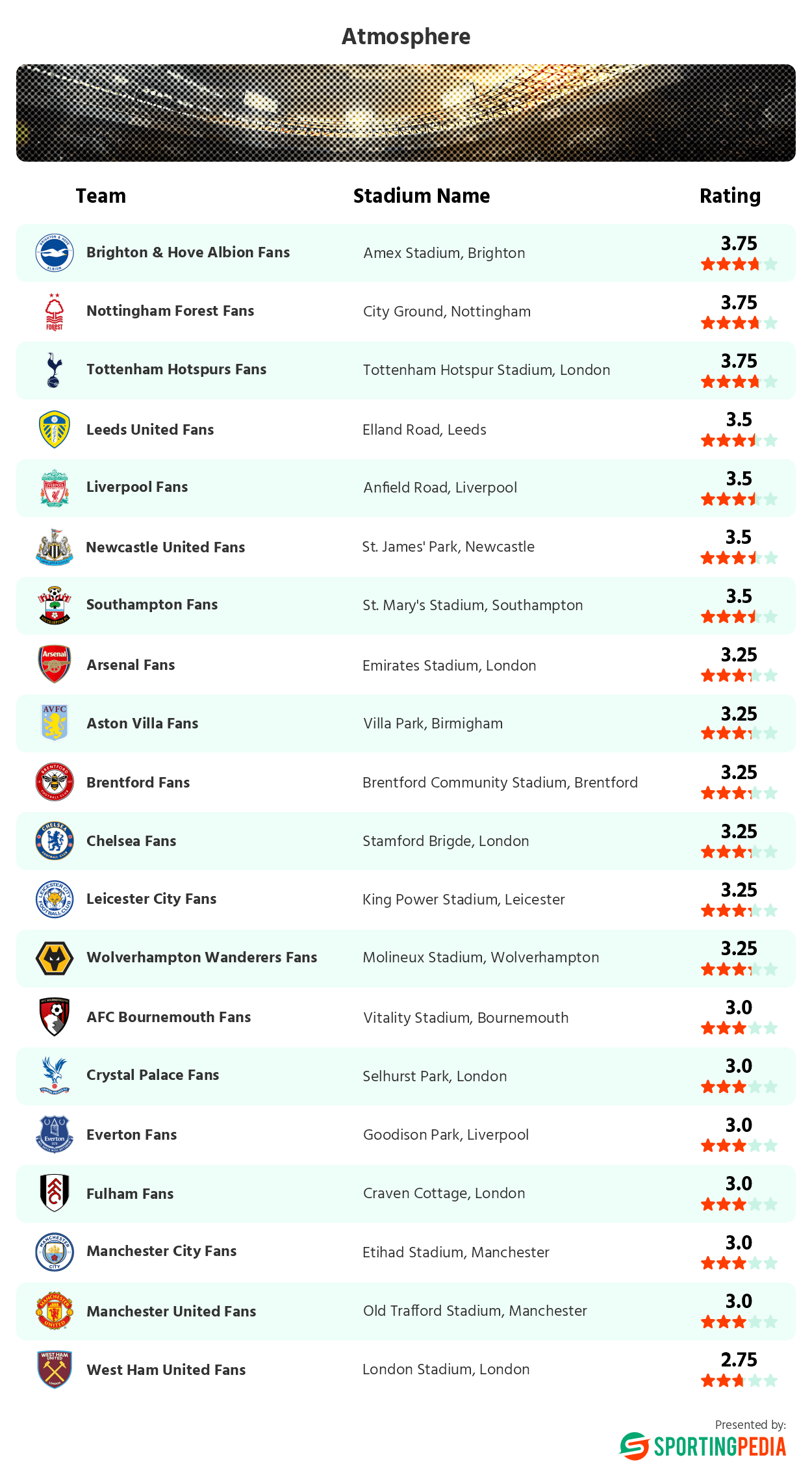 According to the answers received, the AMEX Stadium in Brighton, the Tottenham Hotspur Stadium, and the City Ground in Nottingham offer the best PL match-day atmosphere. The Seagulls and the Spurs are both having successful seasons, and Nottingham has rejoined the Premier League after a 23-year absence. These factors provide the base for the fans to become enthused and turn the stadium into a hostile environment for visiting teams. West Ham’s supporters are obviously displeased with the atmosphere on match days at the London Olympic Stadium because their stadium is the only one with an average rating below 3.0. They have their reasons, one being the venue was designed and built to serve the purposes of the 2012 Olympic games hosted by the English capitаl city.

7. How happy were you with the visibility from your seat? 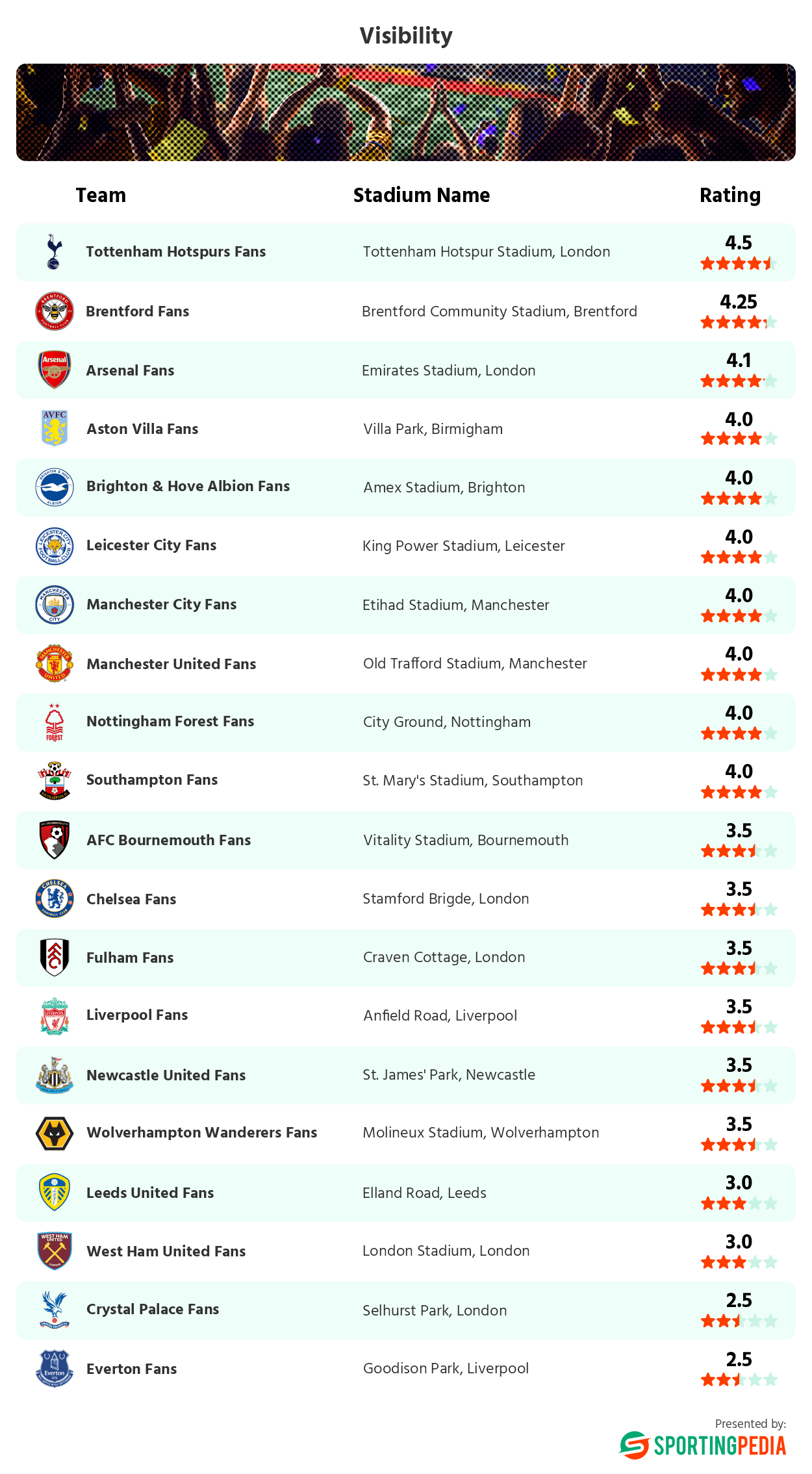 When we asked the football fans to put grades on the visibility from their seats during a game, once again the supporters of Tottenham gave the highest marks. Whether it is because of their enthusiasm or not, in the top spots we find again Brentford, Arsenal and Nottingham, while West Ham, Everton and Crystal Palace supporters rated their grounds with the lowest marks for visibility from the seat. The Tottenham Hotspur Stadium is on top of yet another category and understandably so, as it is the newest Premier League venue designed to offer the best experience to the fans. On the other side of the ranking are two teams with old grounds, needing a lot of improvements in order to catch up with the modern-day stadiums.

8. How would you rate the safety at and around your team’s venue? Please take into consideration that the question concerns not only physical, but also vocal abuses or threats. 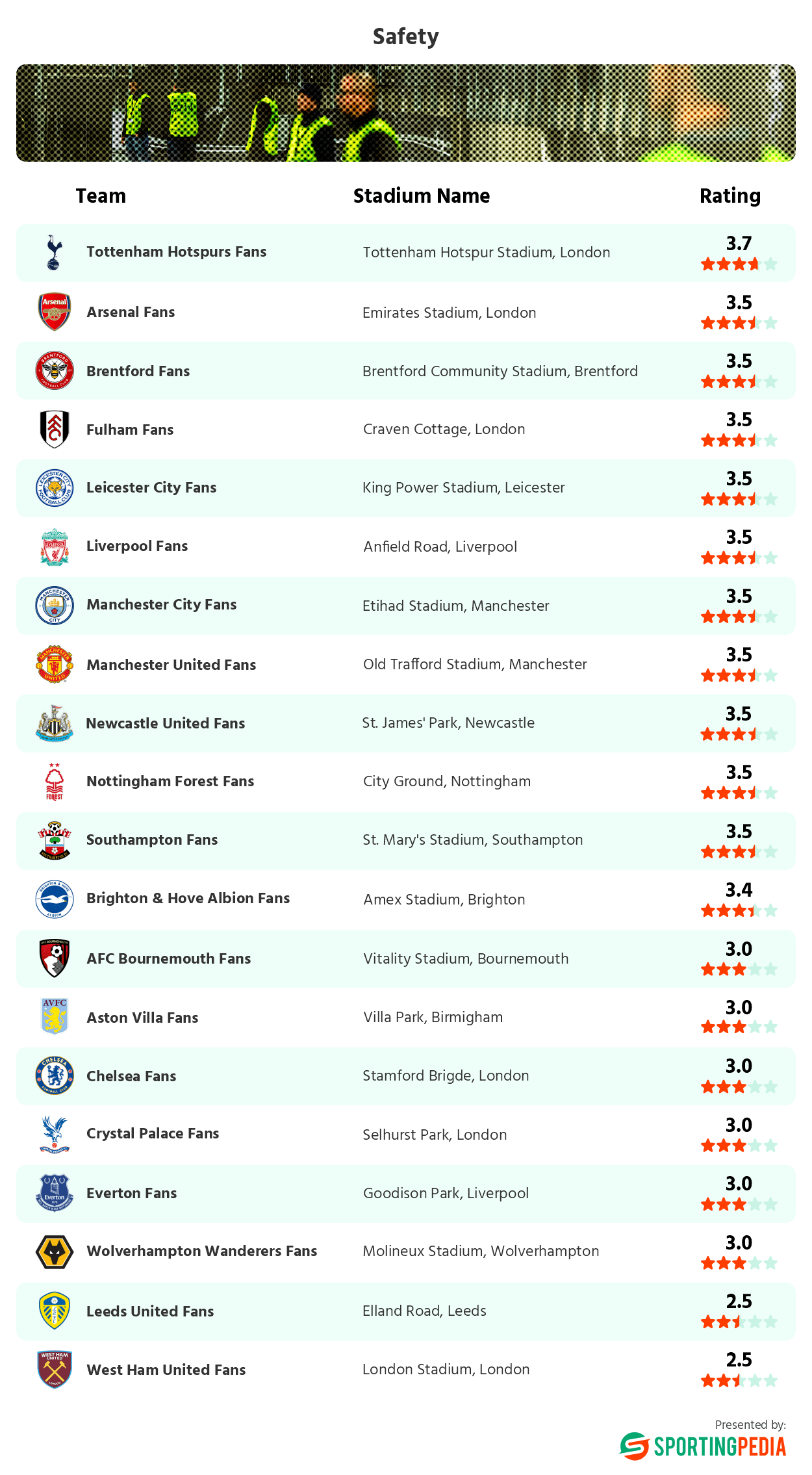 Tottenham Hotspur Stadium received the highest score for “Safety” at and around the venue of all 20 Premier League grounds. Most of the Premier League teams’ supporters answered they feel relatively safe when visiting the stadium to watch a game, but those of Leeds and West Ham are reported to feel most at risk on a PL match-day. It wasn’t such a big surprise to find those two clubs at the bottom, as there were numerous reported incidents with the visiting crowds around Elland Road and last season. As for West Ham, here is a quote of a Hammers fan visiting a match less than a month ago: “It felt like the security guards were seen to be just ticking a box without any real results, which is why many Anderlecht fans were able to get flares through.”

« Survey reveals Americans' preferences and foods of choice while watching sports
England has the highest-valued squad in Qatar 2022 at €1.26 billion, 8 more teams surpass the €500 million mark »
SportingPedia covers the latest news and predictions in the sports industry. Here you can also find extensive guides for betting on Soccer, NFL, NBA, NHL, Tennis, Horses as well as reviews of the most trusted betting sites.
Sports Industry Reports and Analyses 66