After the 32 participating nations at the World Cup in Qatar announced their final 26 man squads for the tournament, we at SportingPedia decided to calculate the market value of each team at the World Cup. There are exactly 9 teams valued at over half a billion euros and remarkably 3 of them exceed the €1 billion mark.

The manager of the Three Lions Gareth Soughtgate assembled the most expensive team participating in Qatar. The 26 men selected by Southgate to represent England at the largest football forum are valued at €1.26 billion. Only two other nations gathered a squad exceeding the €1 billion mark and they are the reigning World Champions from France and the record 5 time tournament winners from Brazil. 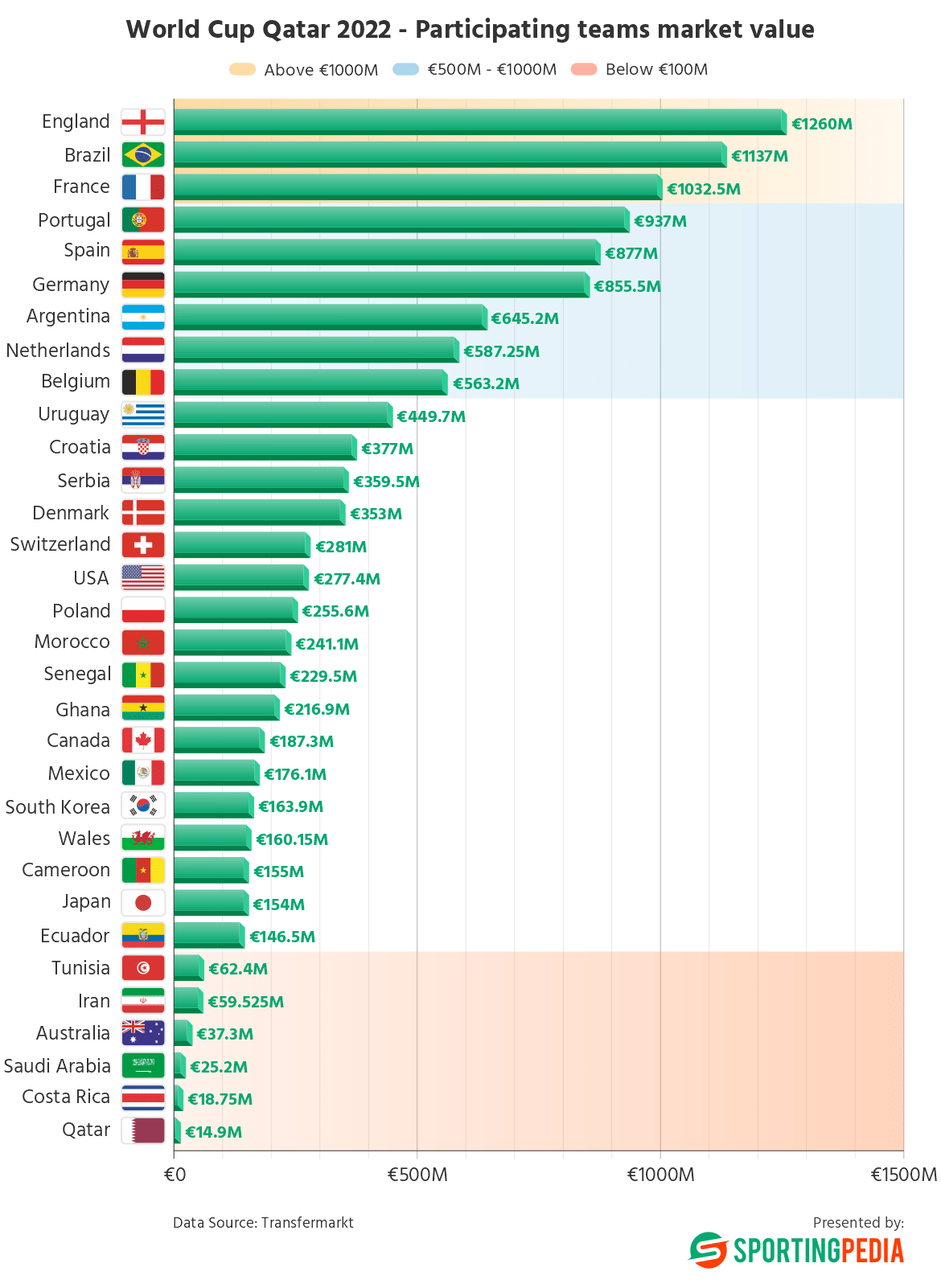 Nine of the teams in Qatar are valued at over €500 million. Besides the already mentioned England, France and Brazil they are: Portugal, Spain, Germany, Argentina, Netherlands and Belgium.

The captain of the Three Lions Harry Kane rose through the Tottenham youth system and is valued at €90 million. Manchester City midfielder Phil Foden, who is valued at €110 million, is the squad’s most valuable player. Jude Bellingham of Borussia Dortmund is the only other player of the England squad, valued at €100 million.
Of the three only Bellingham has been transferred in his career, but with solid displays and a deep run till the later stages of the tournament, those numbers might skyrocket, depending on the individual performances by the players.

Tite has assembled the 2nd most expensive squad for Qatar. Led by Real Madrid speedster Vinicius Junior, the Selecao team has a combined valuation of €1.137 billion. With an estimation of €120 million Vini Junior is the most expensive Brazilian player heading to Qatar. Next in price is his club teammate Rodrigo Goes, who is valued at €80 million, and Neymar rounds off the top-3, with €75 million valuation.

France rounds off the top 3, with a team valuation of €1.066 billion euros. Despite being able to call up 26 players, Didier Deschamps opted to go with 25 in Qatar, which means the team’s total value could have been higher. Kylian Mbappe is not only the player with the highest market value of the French squad, but in the entire world. The Parisian’s estimation is at €160 million, while the next most valuable footballers are Aurelian Tchouameni and Christopher Nkunku, both valued at €80 million.

Fernando Santos and Portugal have the 4th most expensive team in Qatar at €923 million euros. Cristiano Ronaldo is with the team, but his value has collapsed in recent years, mainly because of his progressing age and now CR7 has a value of just €20 million. Bernardo Silva is the Portuguese player with the highest market value at €80 million. In fact, all of the highest valued Portuguese players play in Manchester. Both United’s Bruno Fernandes and City’s Ruben Dias are valued at €75 million.

Spain will have the youngest squad of all 32 participants in Qatar, and they rank as the 5th most expensive selection headed to the World Cup. Barcelona’s Pedri has the highest price tag of all 26 Spanish players at €100 million. All three of the nation’s most expensive players are midfielders, with Pedri’s club teammate and recent Kopa winner for the best young player in Europe, Gavi coming in 2nd with a valuation of €90 million and Rodri of Manchester City 3rd with €80 million.

Hansi Flick will lead the 6th most expensive squad selection in Qatar. The Germans are valued at €873.5 million. Bayern Munich’s teen sensation Jamal Musiala is the player with the highest estimated price at €100 million. His club teammates Joshua Kimmich (€80 million) and Leroy Sane (€70 million) round off the top-3 of the most expensive players within the German team.

Argentina is ranked at the 7th position by market value. Lionel Messi and his countrymen have a combined valuation of €633.2 million. Lautaro Martinez is the Argentinian with the highest price, as his services are valued at €75 million. The record seven time Ballon d’Or winner Messi and Manchester United’s new center back Lisandro Martinez are the other two highest valued Argentinians, both at €50 million.

At €587.25 million the Netherlands team comes in 8th position in the ranking for most expensive squads. At €70 million, Bayern Munich’s defender Matthijs de Ligt is the highest valued player among the Louis van Gaal squad. Frenkie de Jong and Virgil van Dijk join de Ligt as the most expensive Dutch players, both having an estimated price of €50 million.

« Survey reveals how satisfied British football fans are with their experience at the stadium
Qatar 2022: 20% of all players at the World Cup play in England, over 10% in Spain »
SportingPedia covers the latest news and predictions in the sports industry. Here you can also find extensive guides for betting on Soccer, NFL, NBA, NHL, Tennis, Horses as well as reviews of the most trusted betting sites.
Sports Industry Reports and Analyses 56