Survey: How Many Calories Will The Average European Football Fan Consume While Watching the Champions League Final?

SportingPedia surveyed 1,000 football fans across Europe to find out how many calories the average European football fan will consume while watching the Champions League final.

The survey asked 1,000 adults what’s on their “Champions League Final Menu” and the conclusion is shocking. The replies revealed that the average person will consume 3928 calories, drinking beer and eating chicken wings, pizza, sweets, nuts, chips, and more. If you watch the game with friends and have a snack in the meantime, it will take you weeks of regular gym visits to overcome the overweight issues caused by that. 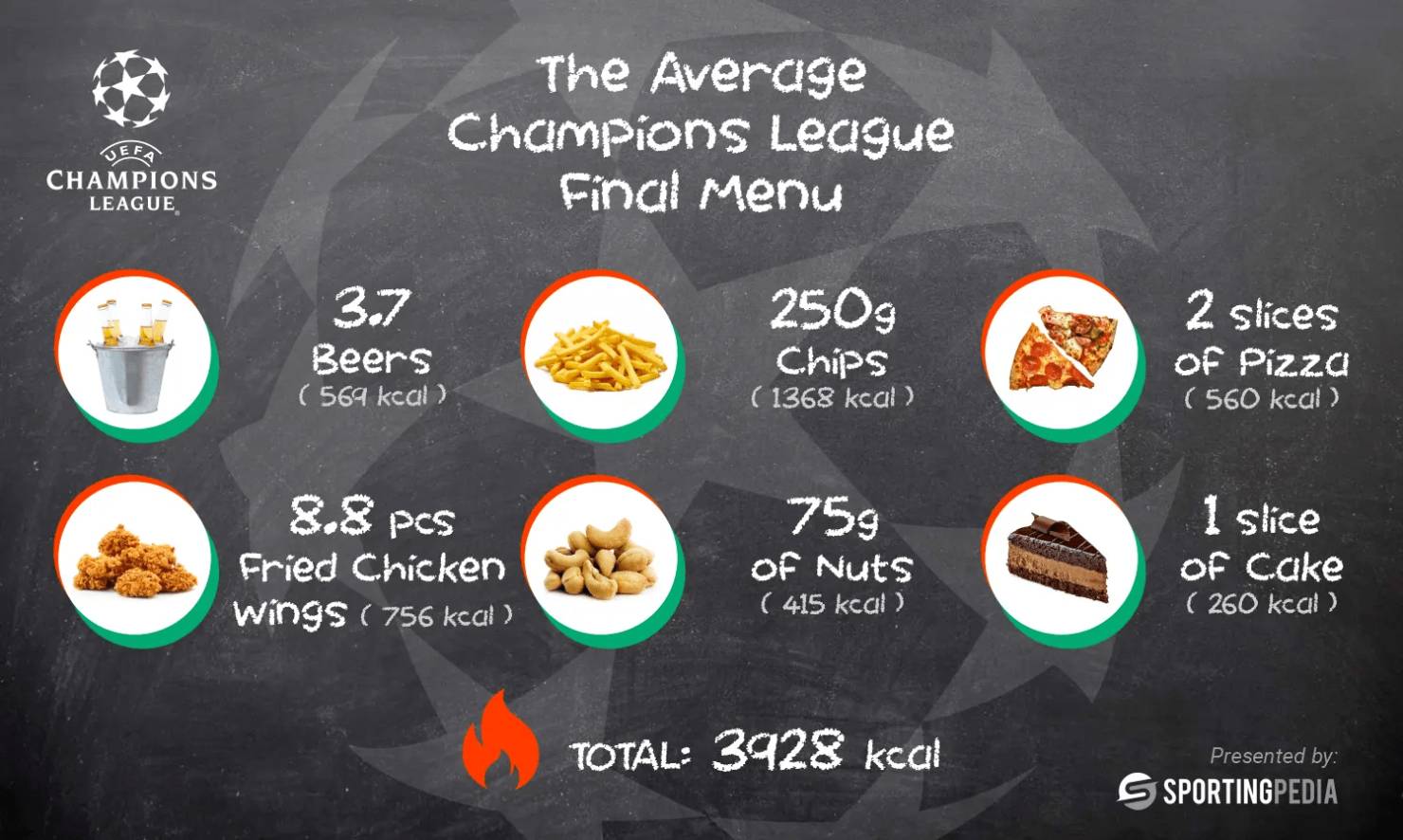 Beer
It comes as no surprise that beer is at the top of the poll, with each fan expecting to consume an average of 3.7 servings of the beverage, equivalent to about 569 calories.

Chips
Chips were the most popular snack of choice among European football fans, with the average person eating around 250 g of Chips adding up to 1368 calories.

Pizza
The Champions League Final Menu would be incomplete for some fans without a pizza delivery. People eat 2 slices on average, which is about 560 calories.

Fried Chicken Wings
This is among the favourite foods of many football fans and the average person will consume 8.8 pieces of fried chicken, equivalent to 756 calories.

Nuts
More than half of the surveyed fans confirmed that they will consume some nuts as well. The average consumption of 75 grams of nuts will add 415 more calories.

Cake
Whether Saturday night ends with a victory for your team or not, the best way to finish it is with dessert. Over 63% of the interviewed replied that they will have something sweet, with the majority of those opting for a slice of cake. It will add up to around 260 calories to what you already consumed.

All the food and beverages above add up to a total of 3928 calories. If you are still not shocked, let us tell you that the average football player burns around 600 calories per hour, which adds up to about 1000 per game. This would mean that you have to play around 4 football games at the professional level to just reverse the Saturday night effect.

The average person needs 2,250 calories per day – 2,000 for women and 2,500 for men. Summer is around the corner and if you are about to watch the Champions League final, it will be a good idea to plan a few gym visits starting today! It will take you more than 2 or 3 to reverse the damage you would take on Saturday night.

« Ballon d’Or winner to be decided in the Champions League Final by individual performances
Viv Anderson Exclusive: Nottingham's fast-flowing football under Steve Cooper is a joy to watch »
SportingPedia covers the latest news and predictions in the sports industry. Here you can also find extensive guides for betting on Soccer, NFL, NBA, NHL, Tennis, Horses as well as reviews of the most trusted betting sites.
Sports Industry Reports and Analyses 23