Brennan Johnson ready to take the Premier League by storm Welsh International Brennan Johnson is just 21 year old and had a breakthrough campaign with Nottingham Forest in the 2021/2022 season, when helping them to return to the Premier League. He has not been even born when his team was last part of the English topflight in 1998/1999, but is already gaining recognition for his performances. In an exclusive recent interview with SportingPedia.com the Forest and England legend Viv Anderson named Brennan Jonson as the team’s standout performer for the last term, while also adding: “Lots of energy, very fast and direct, plus scores goals”.

Johnson has been part of Nottingham’s academy since 2009. He recorded his debut in the 19/20 season when featuring four times for the senior side, but other than that was performing mostly for the U23 team. In 20/21 he was loaned out to Lincoln, where the attacking midfielder was trusted with a main role, appeared in a total of 43 games and established himself as a reliable source of goals, concluding the season with 11 goals and 5 assists.

Nottingham realized they have a gem within their squad and ensured that Brennan Johnson gets regular football in their quest for Premier League return. Prior to the beginning of last season his transfer value was as low as 400k. The Welsh speedster registered 46 Championship matches, scoring 16 and assisting for another 9, helping Forest to finish 4th in the final standings and reach the play-off spots. In 3 play-off meetings, the youngster scored another two important goals to help his side earn promotion. After posting such numbers it comes as no surprise that Johnson is now valued at 15 million euros, and drawing the interest of Everton.

The #20 is gifted with speed and is not afraid of taking on defenders. He is also two-footed and has been used on both wings, as well as the center of the field behind the striker. Johnson will have the chance to develop a lot further as he has been gaining invaluable international experience with Wales. The young player debuted for the team as a substitute in a 0–0 draw against the USA on 12 November 2020 and has already 12 caps for the Dragons. His first start came against Finland on 1st of September 2021, when he earned a penalty. Johnson opened his international scoring account as recently as 11th of June when equalizing late for the 1-1 draw against Belgium. With the World Cup 2022 on the horizon, Brennan Johnson will be eager to keep improving, and has the perfect example of what heights can be reached in the face of teammate Gareth Bale.

Now the player is valued at around 15 million euros, and given that he is British, with a good debut campaign his stock may skyrocket, breaking the 30-40 million valuation. 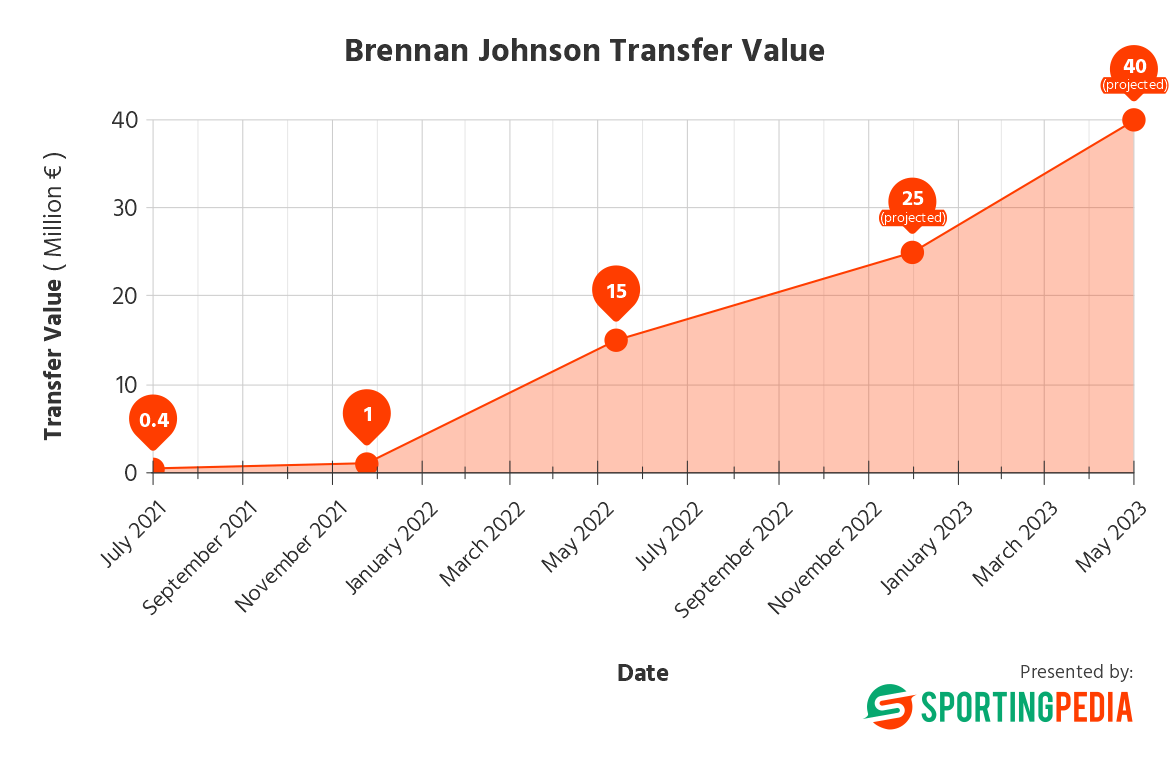 If healthy, Johnson is expected to record his debut in the Premier League on 6th of August when Nottingham Forest visit Newcastle United on the opening day of the new campaign.