After the conclusion of the 21/22 season in Europe’s top leagues, SportingPedia decided to analyze two specific aspects of the football game – the penalty distribution and the conversion rates across the different championships on the continent. Our report focuses on 10 of the best leagues, namely – England, Spain, Germany, Italy, France, Portugal, Netherlands, Austria, Scotland and Turkey, covering all 178 participating clubs. The analysis was prepared using statistical data from Opta Sports, Transfermarkt and Goalserve.

For the duration of the last season there were 1025 penalties awarded in the 10 biggest leagues in Europe. 819 of those were turned into goals, with SportingPedia‘s newest report featuring detailed breakdowns for all of the evaluated 10 leagues and 178 teams to find out who were most and least prolific for the past 12 months. What does the data tell us? 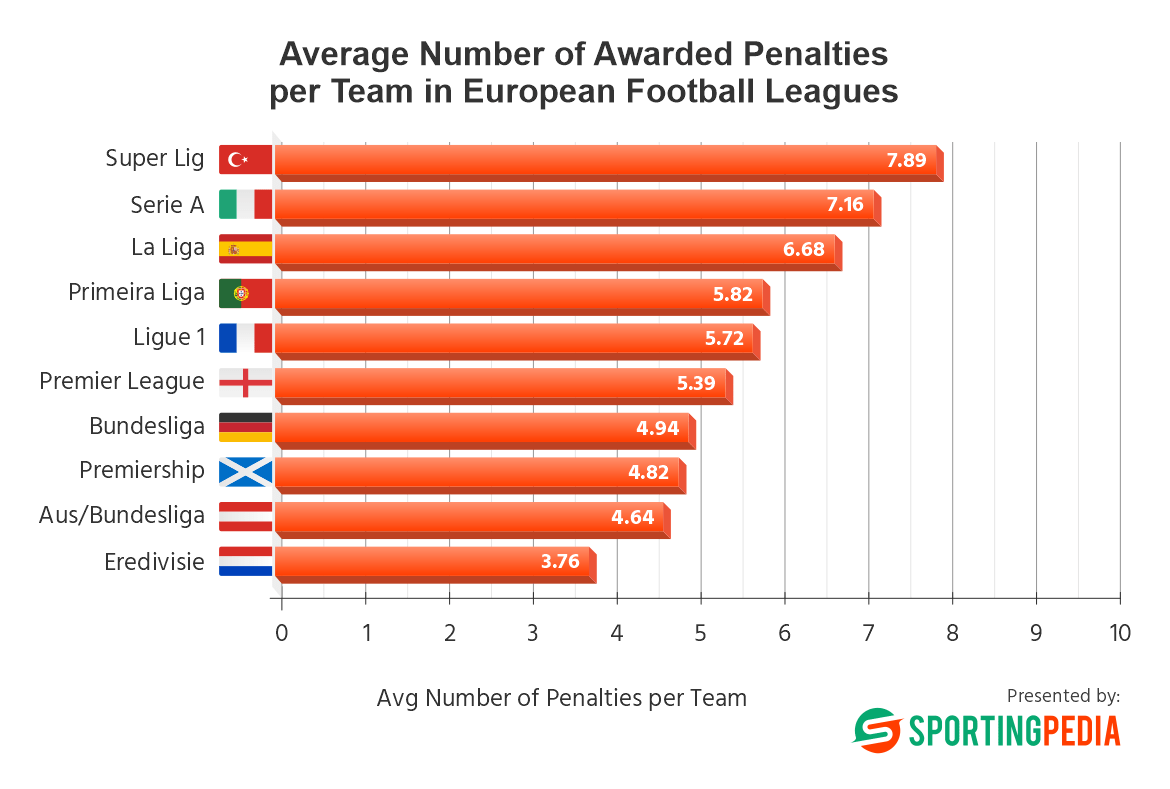 It turns out that the Turkish Super Lig is on top of the chart with an average of 7.89 penalties awarded for each team during the season. When we focus only on the top 5 European leagues, the Italian Serie A stands above the rest with 7.16 per club. On the opposite end we find the Dutch Eredivisie, where the teams received only 3.76 penalties for the length of the term, more than two times lower than the sides in Turkey. If we narrow the search only to the Big-5 (England, Spain, Italy, France and Germany) then the clubs from the Bundesliga were awarded the least, with each of the 18 sides in the German topflight given 4.94 penalties across the 21/22 term. 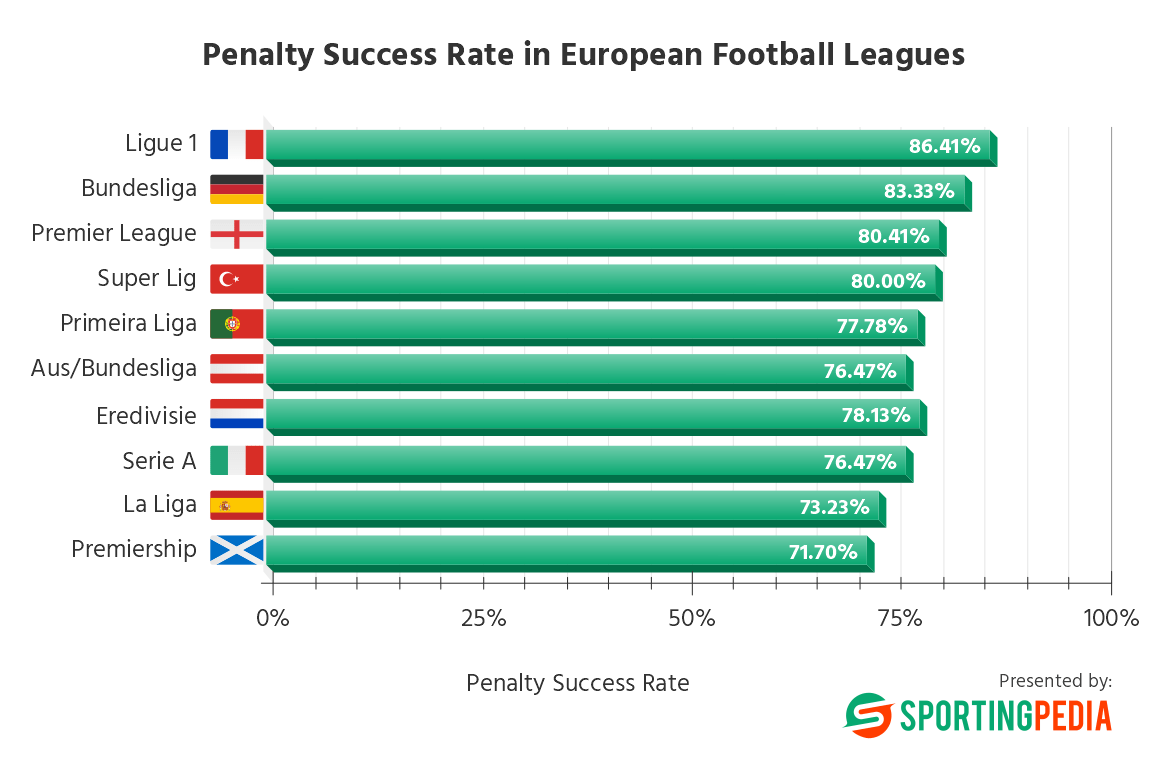 When it comes to accuracy or conversion rates, the chart shows that the sharpest penalty takers last campaign were in the French Ligue 1, with the players there converting 86.41% of the penalty shots taken. Out of UEFA’s top 5 leagues, La Liga registered the lowest success rate with 73.23% and only the Scottish Premiership witnessed worse performances from the spot with 71.70% of the shots ending in the back of the nets. 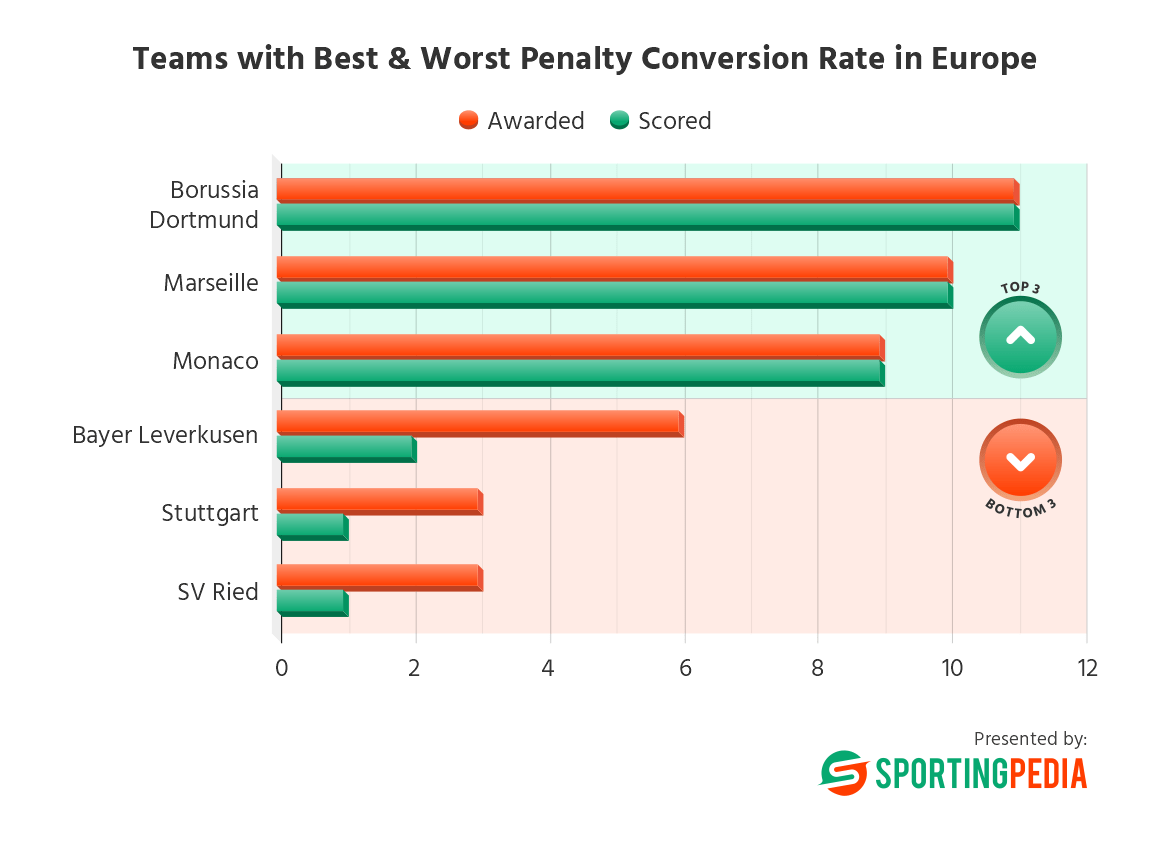 As shown in the figure above, only two out of all analyzed 178 teams across the ten leagues received 10 or more spot kicks and demonstrated a perfect aim, scoring all of them. The players of Borussia Dortmund from Germany and Marseille from the French Ligue 1 dealt best under pressure and displayed the highest conversion rate in our dataset with truly remarkable achievements of hitting 11-of-11 and 10-out-10.

Unlike Borussia, their compatriots from Bayer Leverkusen have had a torrid time when executing a penalty. They were the most struggling side in Europe when receiving a spot kick, converting only 33.33% of the six they took during the previous campaign. Alongside Bayer, Athletic Bilbao from Spain were the only other team given at least 5 penalties for the 21/22 season and averaging below 50% conversion rate, as they were prolific with only 3-of-7, or 42.86%.

Teams with Most & Least Penalties Awarded 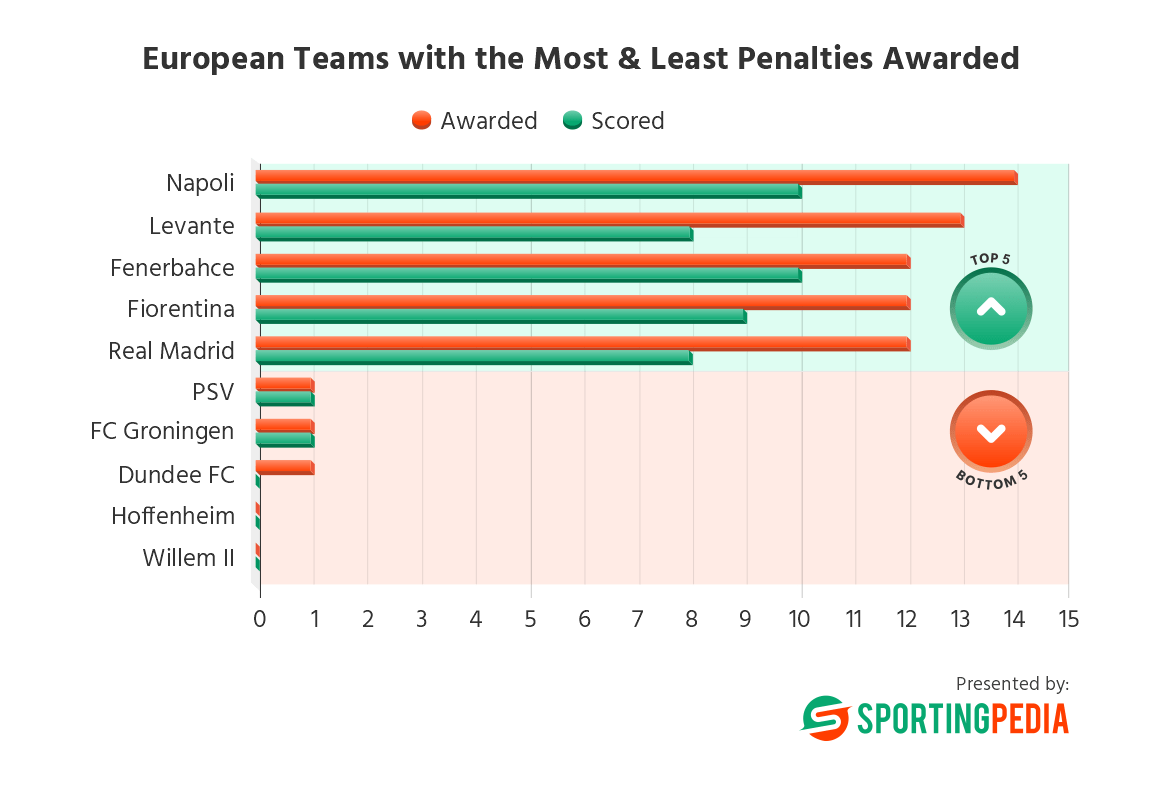 Napoli were the team that went to the spot most often, as the Italians were awarded 14 penalties for the 21/22 season in Serie A. There were only teams from Spain, Italy and Turkey to receive 12 or more penalties, with each of those leagues represented by two clubs at the top of the list.
It is the German Bundesliga that represents the only team of Europe’s top 5 leagues not to be awarded a single penalty for the duration of the previous season, with that being Hoffenheim. Willem II from the Netherlands’ top tier is the only other side featuring in our study not to receive a penalty for the past term.

Below you will find a breakdown for each of the 10 separate leagues on our list: 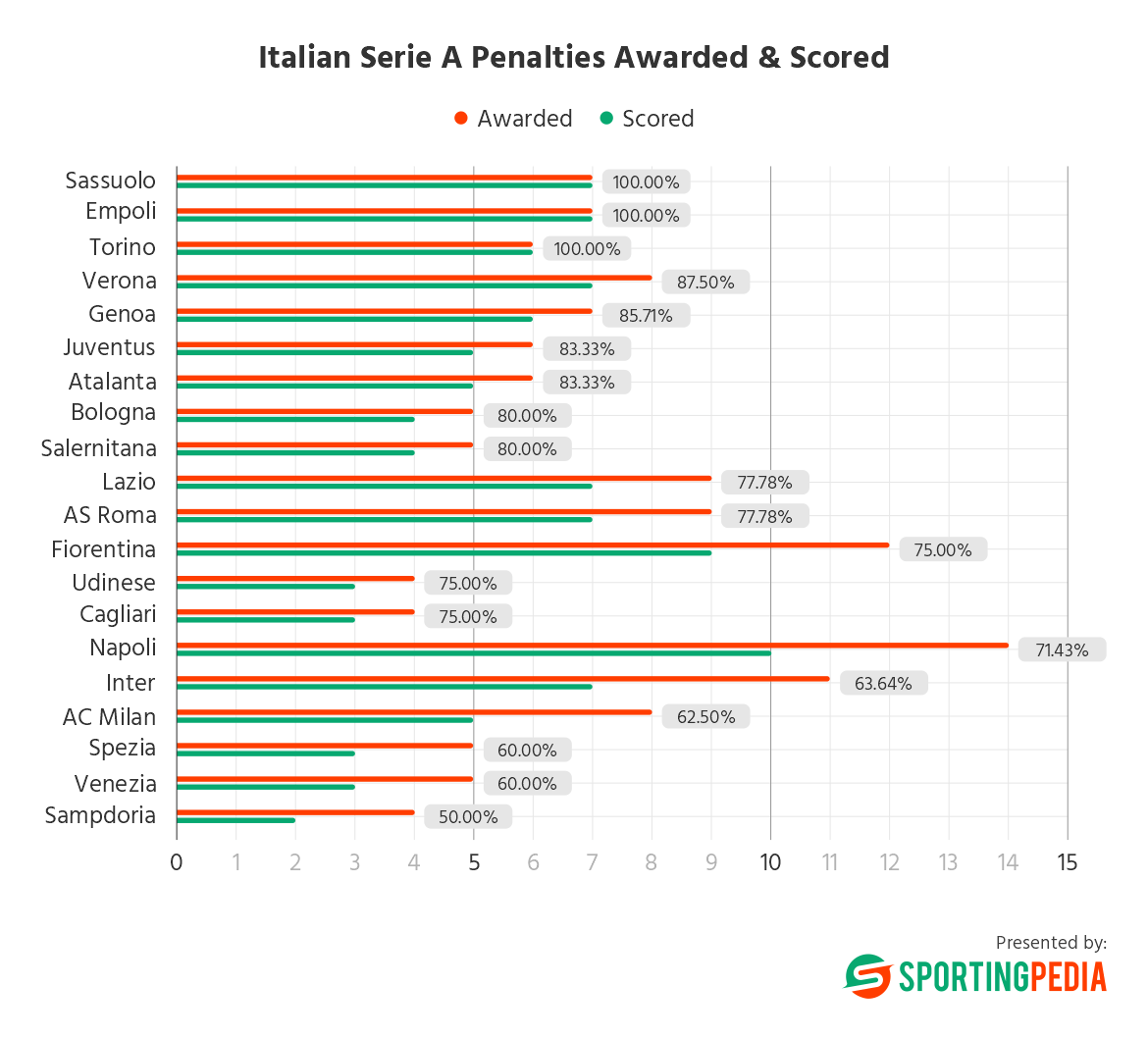 The Italian Serie A is at the top of our chart, with 142 penalties awarded for the previous season. Napoli received the most – 14, while three teams (Sampdoria, Cagliari and Udinese) were awarded the least with 4 each. Sampdoria fared worst of all 20 Serie A sides, converting only 50%. 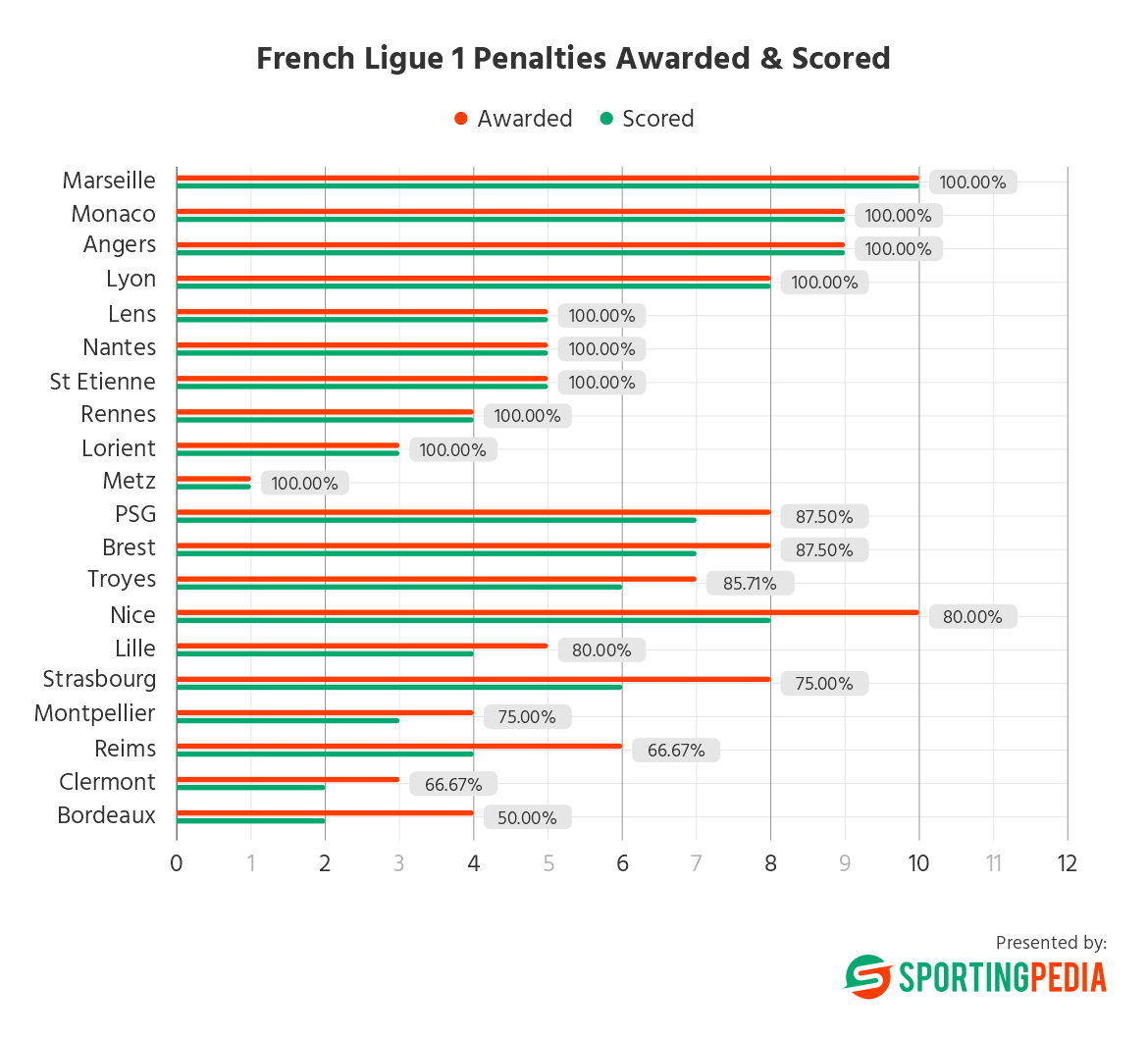 A total of 122 penalties were awarded in the French topflight for the 21/22 season.

Marseille were the team who went most often to the spot, as they received 10 and managed to score them all. On the other end of the chart are Metz who were awarded only 1 spot kick for the entire campaign. Bordeaux were the side with the lowest success rate, as they converted 50%, or 2 out of 4. 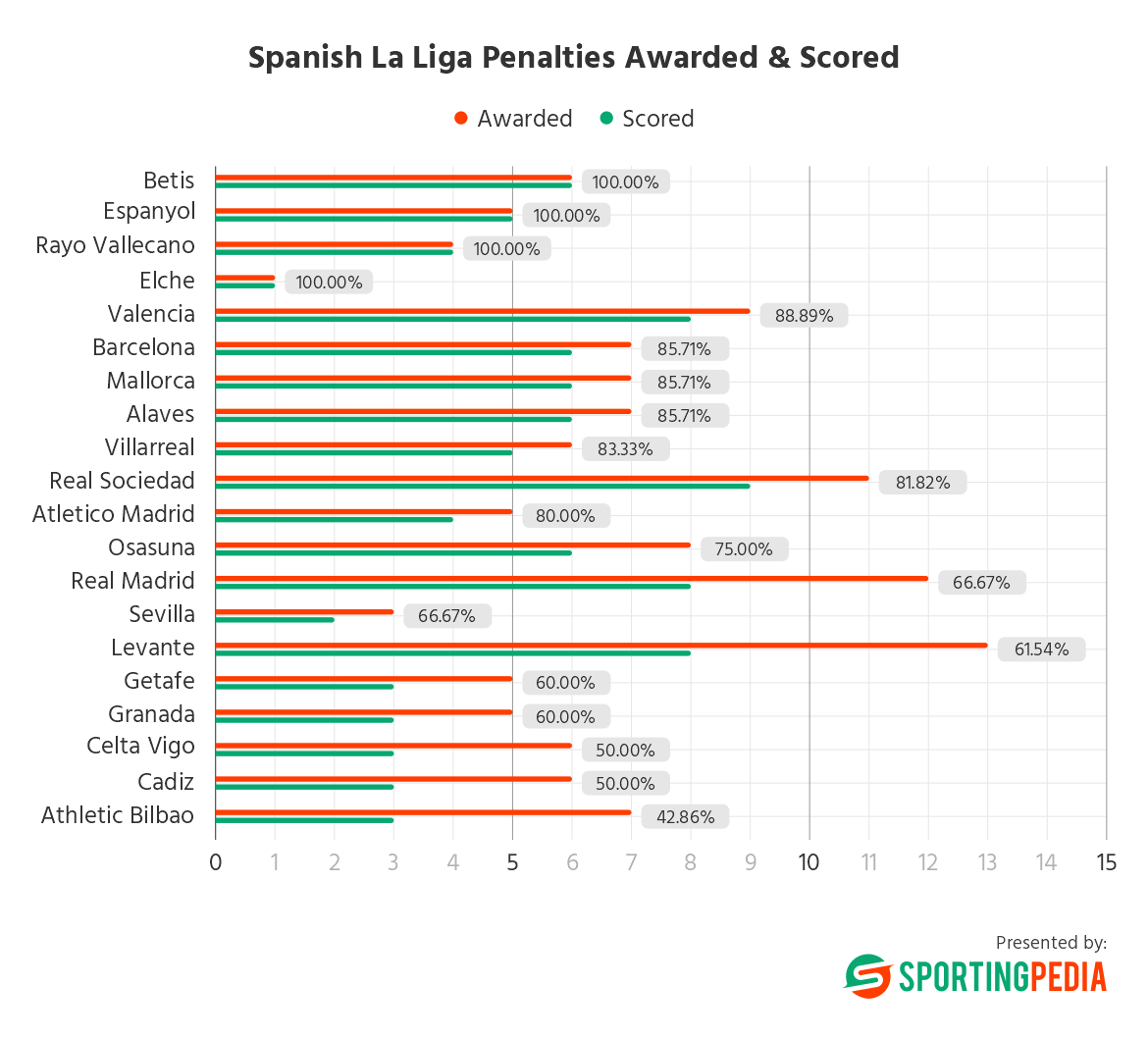 The referees in La Liga awarded 133 penalty kicks for the duration of the previous season. Levante were the team going to the spot most often, as they received 13, but managed to score just 8 of those. Elche were awarded just 1, while Athletic Bilbao were the most struggling side in Spain, converting only 3 of the 7 penalties received. 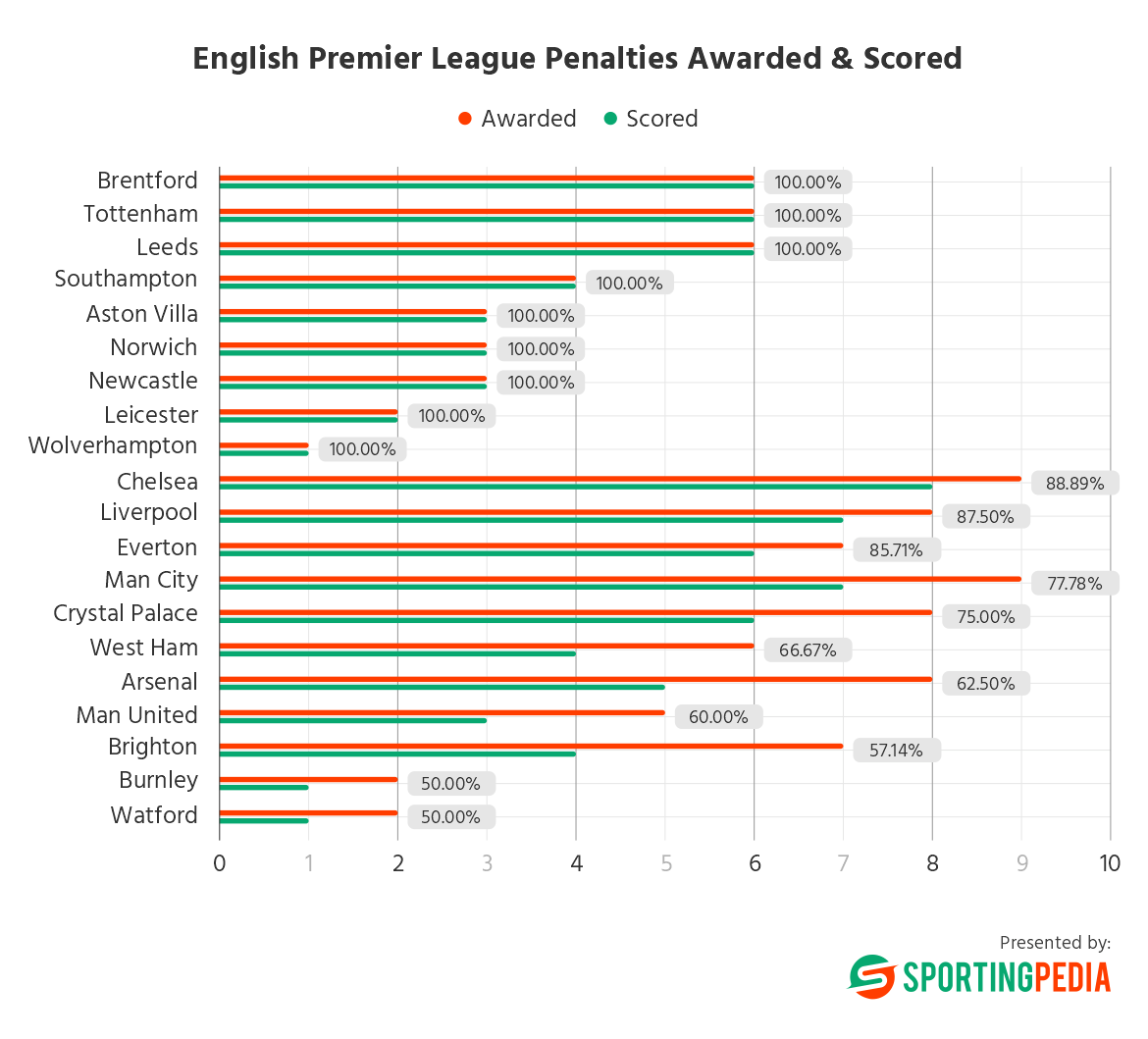 There were 103 penalties awarded in the English Premier League. Manchester City and Chelsea received the most with 9, while Watford and Burnley were awarded only 2 each. Both sides scored just 1 and registered the lowest conversion rate across the entire league with 50%. 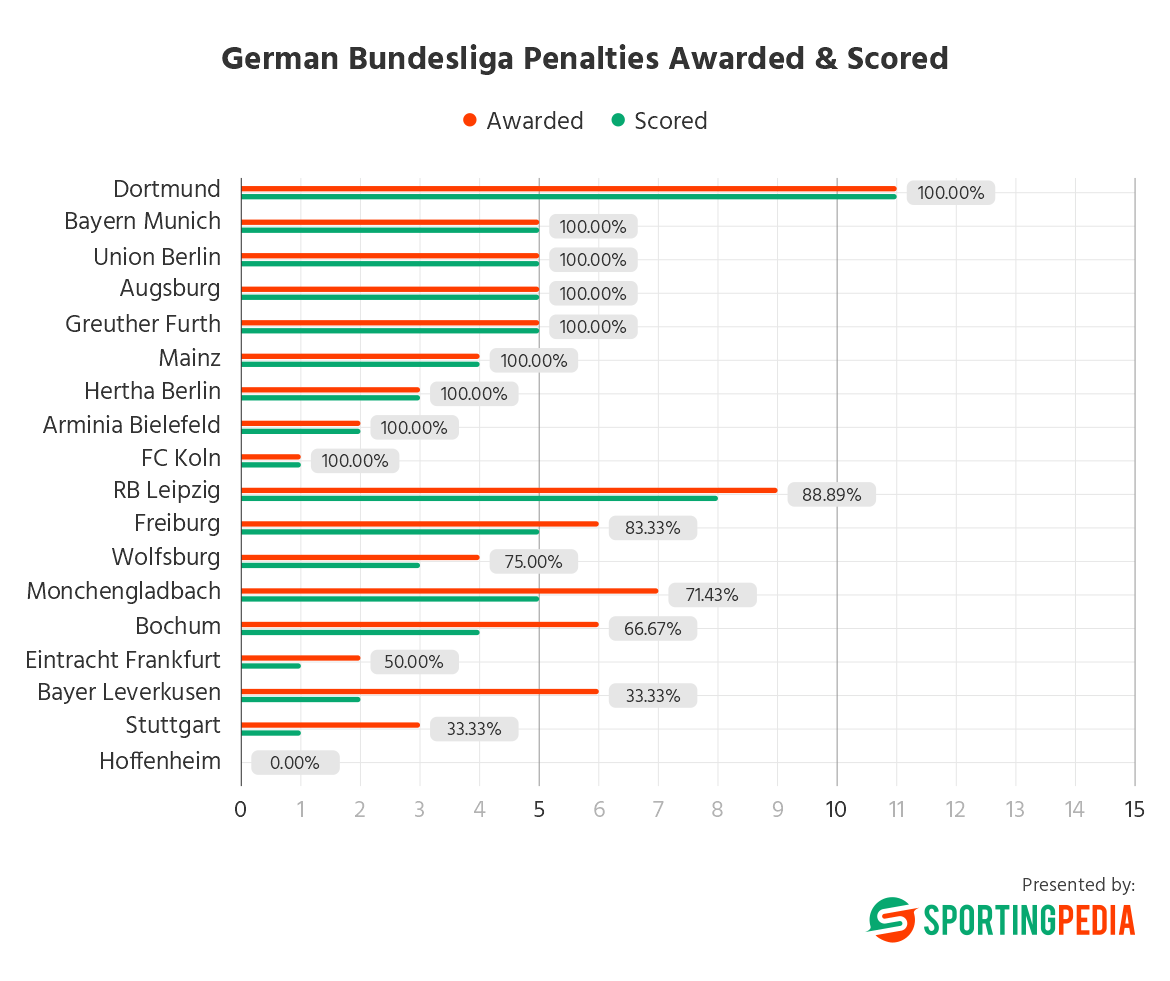 The German Bundesliga has seen the lowest number of penalties across Europe’s big-5 with 84 spot kicks awarded for the past term. Borussia Dortmund were on the receiving end the most with 11 in their favor and they were flawless, converting all 11. Hoffenheim did not receive a single penalty for the entire campaign, while Bayer Leverkusen and Stuttgart were least precise from 11 meters out, scoring only 33,3% of what they were awarded. 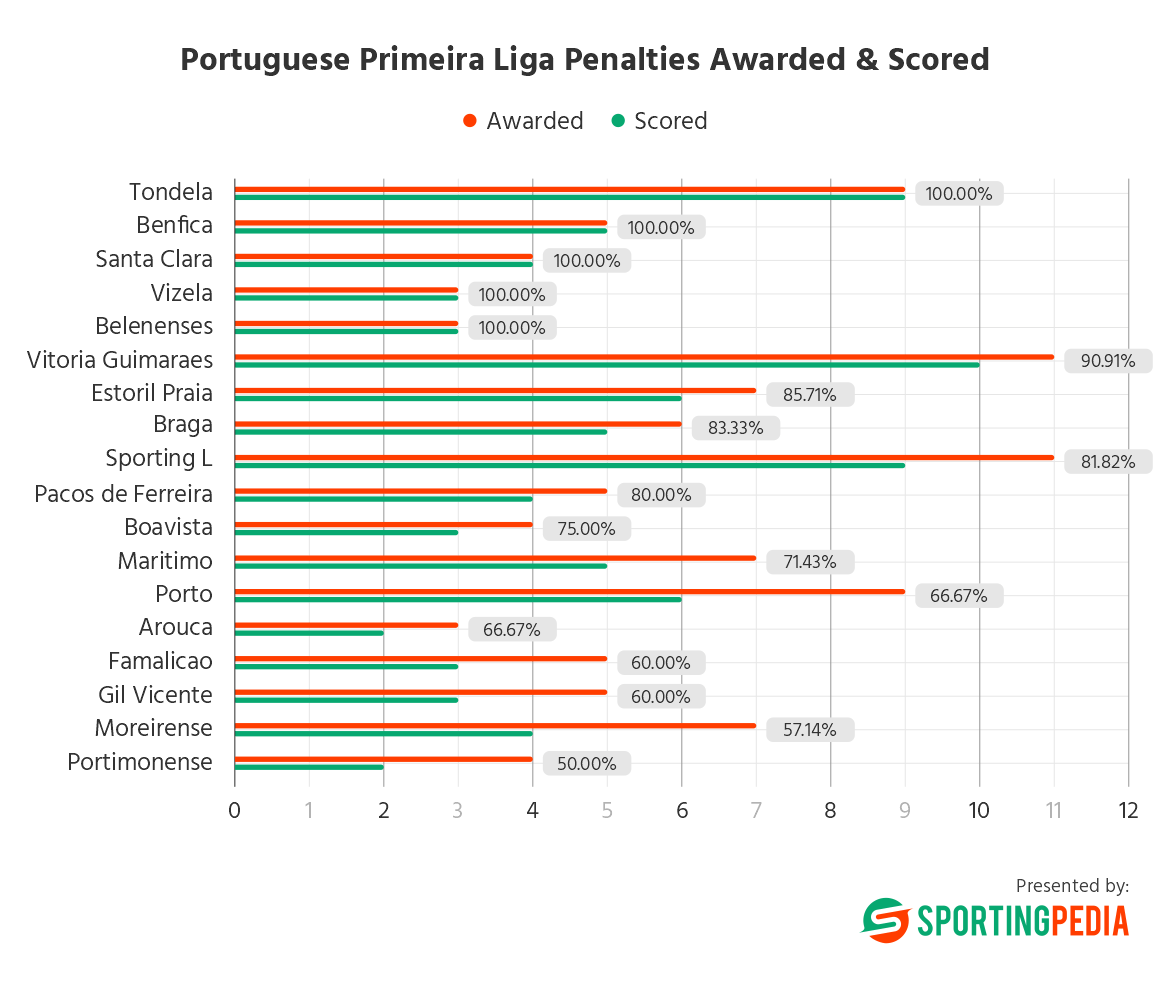 In Portugal’s topflight, 104 penalties were awarded for the 2021/2022 season. Vitoria Guimaraes and Sporting Lisbon are atop of the list in Primeira Liga, receiving 11 each. Arouca, Belenenses and Vizela were awarded the least, as each of those sides received 3 penalties. Portimonense were the worst when it came to execution, converting 2-of-4 or 50%. 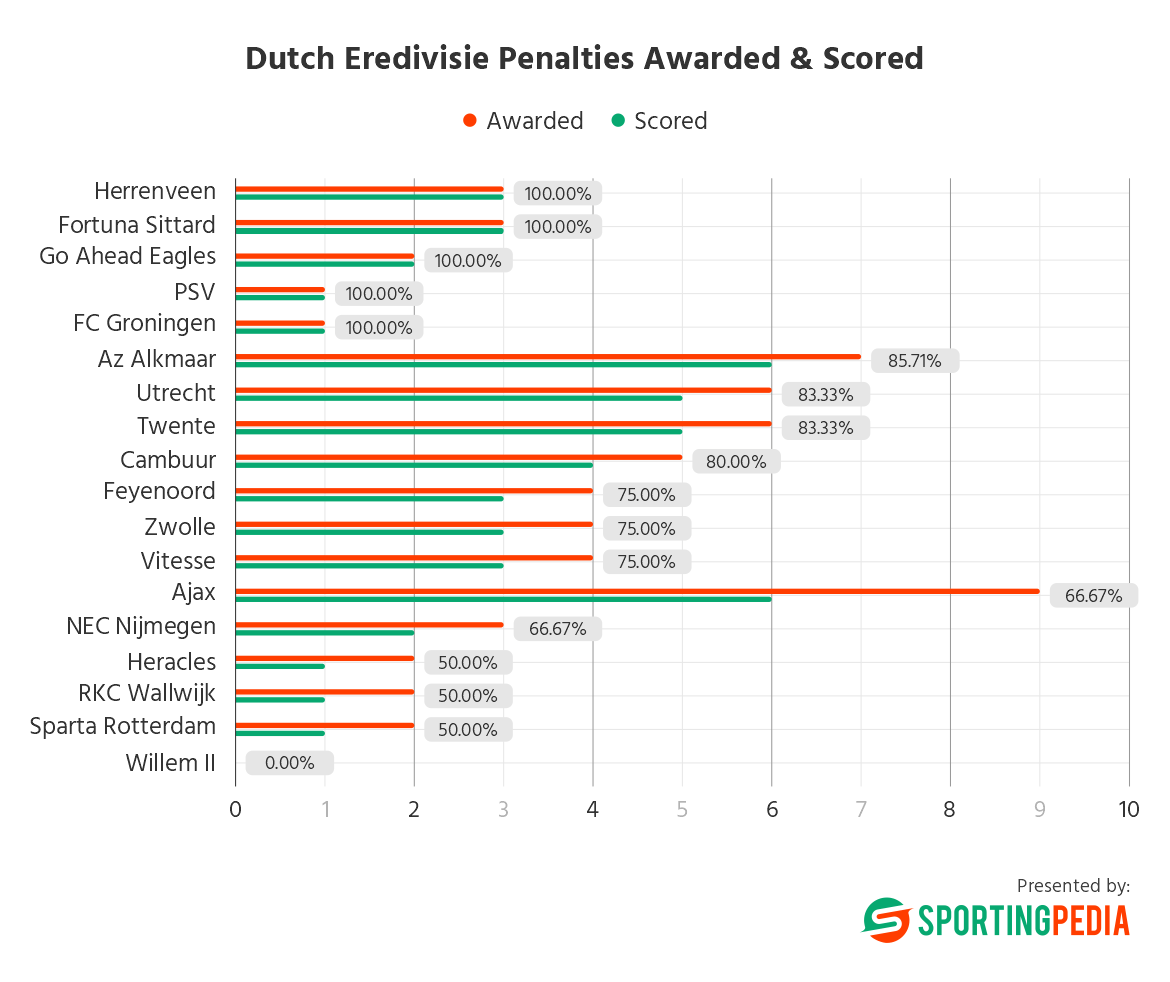 The teams in the Dutch Eredivisie received a total of 64 penalties last term. Ajax went to the spot 9 times, the most of any side, while Willem II were not awarded a single one. When we look at the conversion rates, then Heerenveen and Fortuna Sittard were perfect, scoring 3-of-3, while Heracles, RKC Waalwijk and Sparta Rotterdam all showed 50% accuracy. 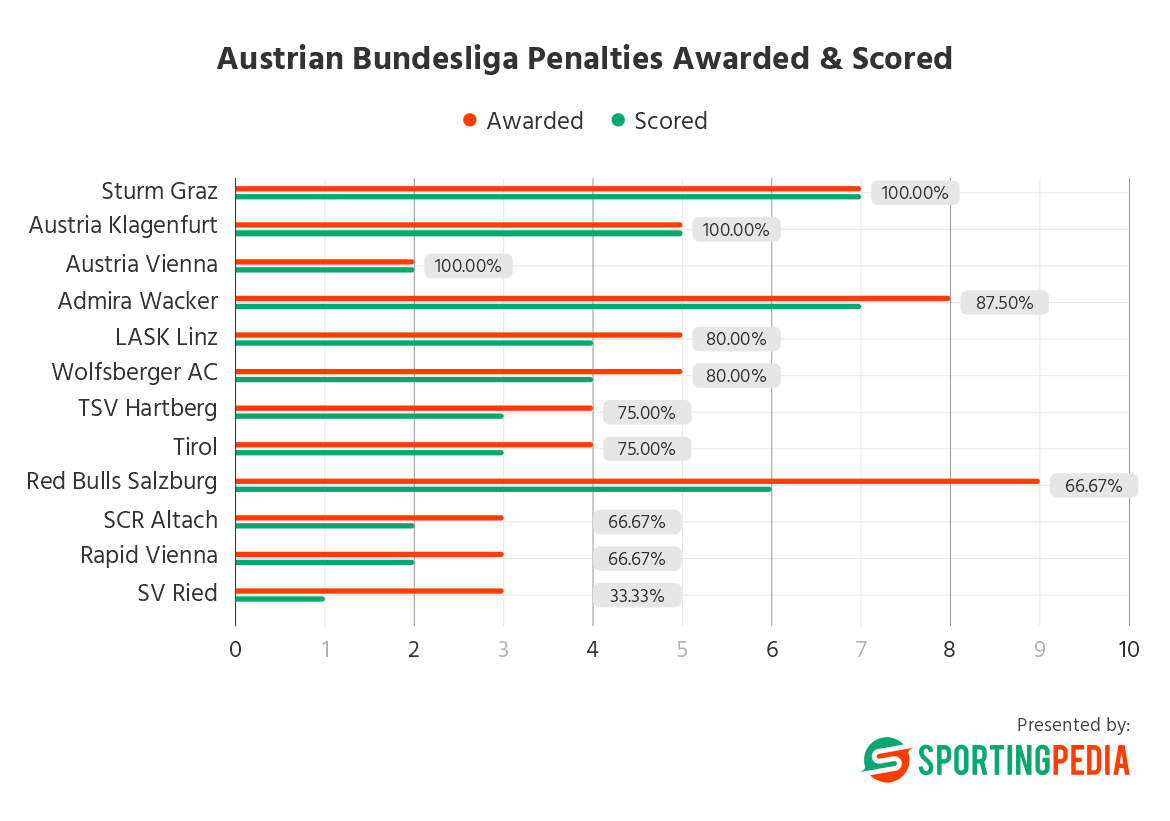 Next is the Austrian Bundesliga, where the 12 teams received 58 penalties during the 21/22 campaign. Most were awarded to Red Bull Salzburg – 9, while the least 2 to Austria Vienna. Sturm Graz were perfect from the spot, scoring all of their 8 penalties and SV Ried were the worst, converting just 33,3%. 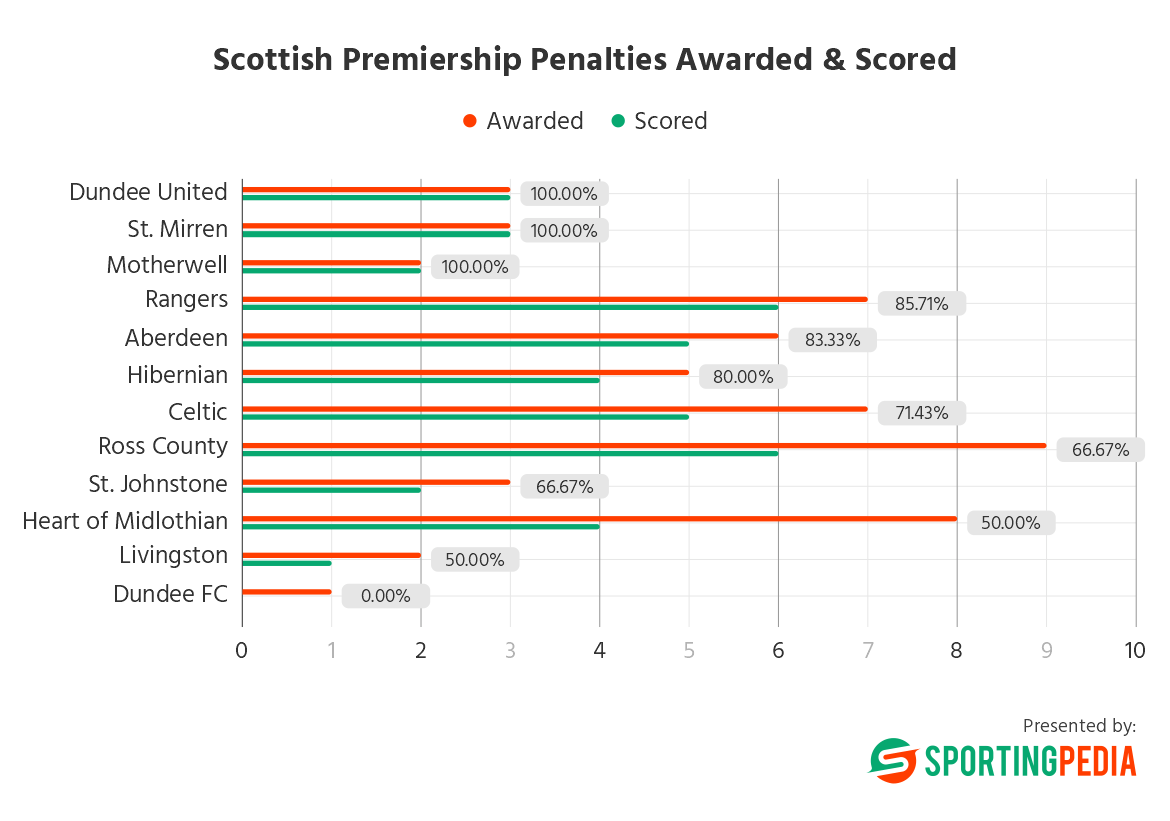 56 penalty kicks were awarded in Scotland’s top tier last season. The most were received by Ross County – 9 and on the opposite end of the list are Dundee FC with just 1. They missed their only penalty and ended the campaign with 0% conversion rate. 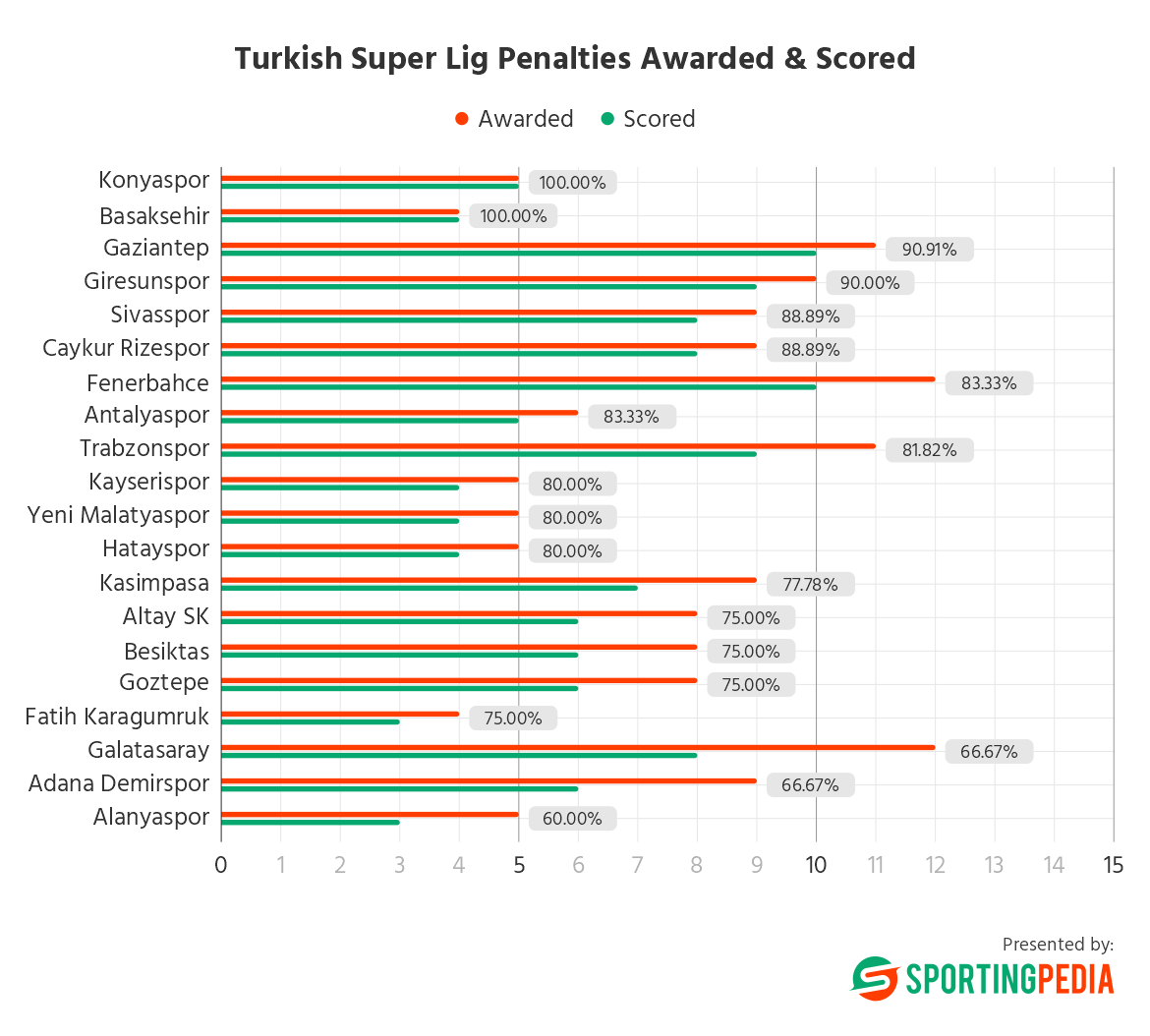 The referees in the Turkish Super Lig pointed to the spot 155 times during the past season. Local heavyweights Fenerbahce and Galatasaray received the most with 12 each. Only two of the 20 teams there were perfect from 11 meters and showed 100% conversion rate, with that being Konyaspor and Istanbul Basaksehir. The latter and Fatih Karagumruk were awarded the least number of spot kicks with 4.

« Three National Football Teams Exceed €1 Billion in Market Value
Earnings per Minute of the Highest Paid Footballers in Season 2021/2022 »
SportingPedia covers the latest news and predictions in the sports industry. Here you can also find extensive guides for betting on Soccer, NFL, NBA, NHL, Tennis, Horses as well as reviews of the most trusted betting sites.
Sports Industry Reports and Analyses 36