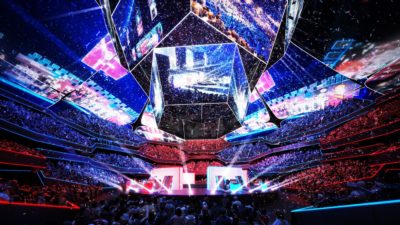 Interest in eSports keeps on growing on a global scale. Currently, eSports betting is one of the hottest trends among people who love video games and gambling at the same time.

Shortly after the appearance of video games in which players pit their wits against each other, the idea of betting on who will emerge victorious started to loom.

The first video game competition for an actual material prize took place at Stanford University in October 1972. In 1980, the game competitions garnered a great deal of attention after Atari held the Space Invaders Championship. Unfortunately, competitive video gaming experienced a major slowdown due to the lack of quality control.

The advent of technologies helped competitive video gaming recover from the recession. In the 2000s, major international tournaments and professional gaming leagues appeared on the scene to change the video gaming landscape forever. Interestingly enough, some of the top video game players come from South Korea. The country was among the first ones to regulate the eSports industry and allow eSports competitions to be broadcast on TV.

Fast-forward to today, the eSports market was valued at nearly $1 billion, marking a significant year-on-year growth. Some of the reasons why eSports has exploded in popularity include the abundance of games as well as their quality and accessibility.

Skin betting, on the other hand, is more complicated as it involves wagering on one or more items in an attempt to win another skin. Skins change the appearance of the in-game weapons and characters but do no influence a player’s performance in the game. In other words, skins are used for cosmetic purposes to upgrade the look of the characters and weapons.

Skin betting is exciting but riskier compared to traditional eSports betting as its value is more versatile. Different skins have different currency values depending on their rarity and demand. So, it is hard to determine how much money players actually risk. Skins can be used not only to change the appearance of the characters or weapons. Players can trade them with other players, sell them for an on-site currency or real money, or keep them for later.

Most jurisdictions still did not introduce legislation outlining the legality of skin betting. Hence, operators that offer skin betting are not licensed and regulated. In other words, this type of eSports betting takes place in the grey market, posing an invisible threat to children. Countries such as the United Kingdom and Australia started considering regulating this sector. In March 2017, Norwegian officials decided to class skin betting as a form of gambling, meaning that the country’s gambling laws govern this practice.

eSports and the Law

Video games are designed by game developers who have intellectual rights to their products. Leading video game publishers run their own leagues, while others license their games to tournament operators who are in charge of promoting the games and organizing live events. Following that stream of thoughts, we have to mention that copyright and trademark laws are essential to eSports events.

Endorsement contracts allow a given company to use a player’s likeness, image, or reputation to promote their brand. Such contracts are among the major means for professional eSports players to earn money.

Countries and Their Stance on the Matter

As far as regulations are concerned, many countries still have no cut and clear rules regarding eSports betting. The main reason for the lack of legislation is that officials are still trying to determine the right classification of eSports. Even though eSports betting shares a lot of similarities with sports betting, these are not the same.

European countries that take pride in their well-regulated gambling markets such as the UK, Spain, Malta, Italy, and Denmark classified eSports betting as gambling and successfully regulated the industry. Many US states also did the same, even though the situation there is more complex as gambling is regulated on a local, state, and federal level.

As for Asian countries, each of them has a different point of view on the matter. Online gambling in some Asian countries is regulated, which does not mean that there are laws specifically applicable to eSports. According to recent news, the Korean plans to relax the eSports industry regulations in a bid to maximize the full potential of the market. News agencies reported that the plan includes the establishment of an eSports center to provide players with the chance to participate in amateur eSports teams.

Other Asian countries decided to take a tough stance on the matter and ban all forms of remote gambling. This, on the other hand, means that eSports betting is also not legal within the borders of such countries.

Breakdown of the eSports Ecosystem

eSports consists of several segments that interact with each other to establish the complex ecosystem of the industry. As we already mentioned above, the appearance of video games is at the heart of the eSports betting sector. Without competitive video gaming, the existence of eSports betting would not be possible. However, these games are designed by developers/publishers. Some publishers decide to produce coverage of the competitions on their own, while others sign a contract with league organizers and streaming platforms.

Another segment within the eSports ecosystem includes the players and the teams. Players often provide advertising space on their streams for teams and brands. Undoubtedly, eSports is profitable for individual players. A curious fact is that the Danish professional eSports player Johan Sundstein has the highest overall earnings.

Nowadays, eSports teams heavily rely on sponsors as teams should be financially independent of tournament organizers. Winning the cash prize offered by a given event is an accomplishment for the team, but in many cases, it does not offer financial stability. The sponsors are usually entrepreneurs, entertainment companies, or owners of sports teams.

The third segment includes the league organizers who are responsible for planning and ensuring coverage of a certain event. Streaming platforms such as YouTube and Twitch buy the rights to broadcast the event. Interestingly enough, Facebook and Twitter, the two most popular social networks, are also eyeing the opportunity to offer eSports content.

Currently, viewers do not need to pay a subscription fee to watch eSports events. Following that stream of thoughts, the broadcast and media is yet another segment within the eSports ecosystem. The fan base is also an important part of the eSports ecosystem. All segments are synchronized to form the complex ecosystem of eSports.

The prosperity of the eSports industry boils down to each of the abovementioned segments. The following infographic presents information about the revenue each segment is expected to generate by the end of 2020. It is based on a statistic released by statista.com in October 2020.

Based on the figures, we can conclude that sponsorships are expected to generate the biggest portion of the revenue on a global scale. The second big segment, and namely media rights, is projected to accumulate approximately $163 million in revenue.

The eSports industry is better developed in some countries than others. If we look at the number of active eSports competition players as of 2019, the United States leads the way with 5, 163 active competition players. China is ranked in the second position with 1,089 players, followed by the Republic of Korea with 1,083 active players. France and Germany also made their way to the list of the top 5 eSports countries by the number of active players with 1,060 and 1,009 players, accordingly.

With regard to the prize money won in eSports competitions in 2019, the United States is the leader. According to a graph by statista.com, American eSports players won a total of over $40 million. China occupies second place on the list with a total of over $19 million in prize money. South Korea is just a step behind China, with almost $17 million from eSports tournaments in 2019. Finland and France rank in fourth and fifth position on the list of highest-earning countries, respectively.

If we look at the market share of different countries based on the revenue the eSports industry generated in 2019, North America is the leader, holding as much as 37% market share. China is the second country on the list with a 19% market share, followed by South Korea with a 6% market share. The rest of the world is estimated to hold a total of 38% share of the entire market. The figures are estimates presented by statista.com in 2019.

Hence, we can conclude that the US, China, and the Republic of Korea are the three countries with the most mature eSports market.

Many professional eSports players are attending tournaments and championships attracted by the sizable cash prizes up for grabs. Interestingly enough, the highest prize in eSports up until now reached over $34 million and it was offered at the International 2019, Dota 2’s championship tournament.

According to statistics, the total prize money from the beginning of the year to date amounts to $88.97 million and a total of 3397 tournaments were held in which 20,125 active players participated. For comparison purposes, the total prize money reached $234.99 million in 2019. Furthermore, a total of 27,423 players were registered participating in any of the 5,309 tournaments that took place last year.

The following infographic presents the top 5 games in 2019 and 2020 (until now) based on the paid prize money.

eSports Betting on the Rise

The eSports betting industry keeps on growing exponentially. Currently, competitive video gaming is among the most preferred pastimes all over the world. The fan base also keeps on increasing. In 2018, a survey revealed that the frequent eSports viewers are over 170 million and the occasional viewers are 222 million. In 2020, it was reported that these figures significantly increased. Up until now, the frequent viewers are approximately 220 million and the occasional viewers are over 270 million.

It is not only the fan base that increases. In 2019, news agencies reported that the eSports betting industry is worth more than $1 billion. Industry insiders believe that the eSports revenues might exceed $2 billion within three years, provided that the industry grows at the same pace.

Even though the sports betting industry witnessed a significant slowdown due to the Covid-19 pandemic that led to the cancelation of many sports events, the eSports market continued its rapid global growth. According to a recent report released by the UK Gambling Commission, the eSports industry marked an incredible year-on-year growth of 2992%.

Industry insiders believe that the future will open new horizons for the eSports industry development. New games with better quality will appear on the scene to cater to the constantly growing demand for new more engaging games. Some experts even consider that artificial intelligence will also find its place in eSports. In addition to that, more jurisdictions will regulate the eSports betting market.

Recognizing the big potential of the eSports industry, a growing number of casinos started to accept wagers for eSports competitions. In 2018, Luxor Casino made the headlines after it was announced that the casino is ready to open the first purpose-built eSports arena on the Las Vegas Strip. We expect that this trend will continue and other land-based casinos will build such an arena.

« US Sports Betting Market Assessment, Expansion, and Growth Forecast
10 Highest-Paid Athletes Under 25 »
SportingPedia covers the latest news and predictions in the sports industry. Here you can also find extensive guides for betting on Soccer, NFL, NBA, NHL, Tennis, Horses as well as reviews of the most trusted betting sites.
Sports Industry Reports and Analyses 23